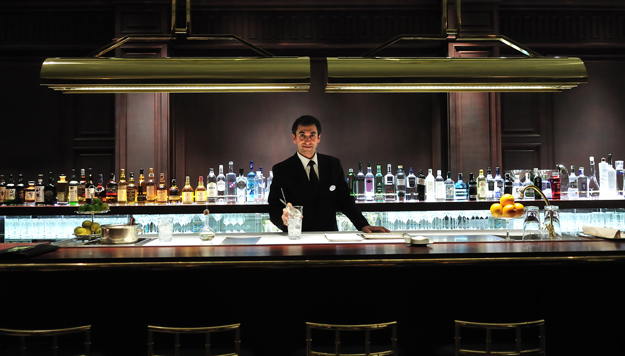 At the fourth Gastrofestival, held in Madrid from 19 January to 3 February, one of the biggest attractions is liquid cuisine. Cocktails and mixed drinks have been fashionable in the city ever since Perico Chicote opened his legendary bar on Gran Vía. Here’s a tour of some cocktail bars you simply can’t afford to miss.

“See you tonight in Chicote”. This was probably the most frequently uttered sentence by actors and actresses from the Hollywood star system who visited Madrid between the 50s and 70s. Perico Chicote opened his bar on 18 September 1931 and straightaway it became the place to be seen on the international celebrity circuit. Ava Gardner, Grace Kelly, Sophia Loren, Gary Cooper, Orson Welles, Laurence Olivier and so many more frequented the establishment. An art deco gem that’s now enjoying another heyday after being refurbished in the early 21st century. You have to go and check it out for yourself by trying a classic Mint Julep, for example.

But your cocktail experience doesn’t stop here. Just walk round the corner and at the back of Chicote you’ll find another two classy cocktail bars in Calle de la Reina. Del Diego at number 12 has a menu featuring over 50 kinds of cocktails and mixed drinks. They include the Cosmopolitan, the best in the whole ofMadrid.

If you’re still up for it and keen, just walk a few steps further and go into Cock. We don’t know what the Coen brothers ordered when they walked through the door. A White Russian maybe?…like The Dude, the main character in their film The Big Lebowski. Their unconventional style is completely unrelated to this truly elegant English-style venue, which still looks just the same as it did in the 1920s, when it first opened.

Cocktail bars have become very fashionable in Madridrecently, and some new ones have turned Madrid’s social life upside-down. A prime example is Dry, run by famous bar tender Javier de las Muelas in Hotel Gran Meliá Fénix. One of his specialities, the Carnyvore, involves an infusion of the Szechuan Button flower and served in a carnivorous flower half submerged in brown sugar inside the glass.

Another place worth a visit is Le Cabrera. Behind the bar here in the Las Salesas district, you’ll be greeted by past glories, such as the Martínez (gin, vermouth rosso, Maraschino and Angostura bitters) plus classics like the Tom Collins (gin, sour mix and soda). But you certainly can’t say that this cocktail bar is rooted in the past. On the contrary. Diego Cabrera has fun on the menu with several crazy mixes, such as Fresh Ginger (vodka, orange juice, passion fruit and ginger).

Madridboasts many other fantastic cocktail bars, like Josealfredo, Santamaría, Belmonte, the list goes on. One last recommendation, which is also a piece of good news. Carlos Moreno, formerly barman at O’Clock, has just opened Charly’s Bar in Calle Jorge Juan.