Are there any mummies here? 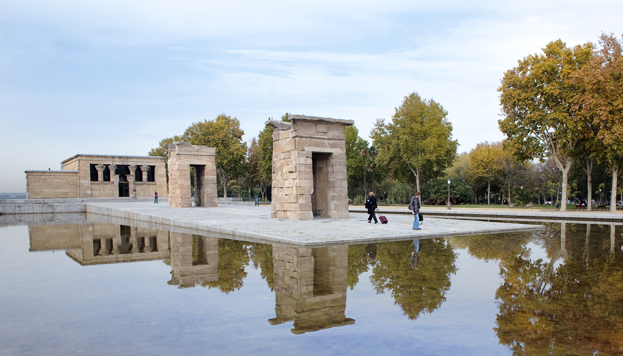 I recently enjoyed a family day-out with my friend Almudena de Benito, architect and creator of Chiquitectos (an architectural workshop for kids), and her son Martín who, together with Manuela, my daughter, could easily have passed for a 21st century Anthony and Cleopatra if they hadn’t both been wearing their break dancer gear.

The advantage of making plans with architects is that they allow you to see Madrid from a different angle. Under Almudena’s expert guidance, our afternoon in this park turned into a fabulous history class. What’s more, as she is in the middle of her doctoral thesis on Childhood / architecture / space-time, each visit to a park / place / space becomes a new and unique experience.

I’ve always been fascinated by the Egyptian civilization and was forever drawing mummies and hieroglyphics and renting out National Geographic documentaries. I live very close to Madrid’s  Oeste Park. where we’re lucky enough to have an Egyptian temple. Yes, an authentic Egyptian temple! The Temple of Debod.

Although we’ve grown used to it, it is a truly unique architectural gem: an Egyptian temple outdoors During our afternoon in the park, Almudena explained to us how it came to be in our city. In 1960, due to the construction of the Aswan Dam, many archaeological sites were under threat… Egypt gave the temple to Spain as a gift to thank us for our help in saving their historical heritage. 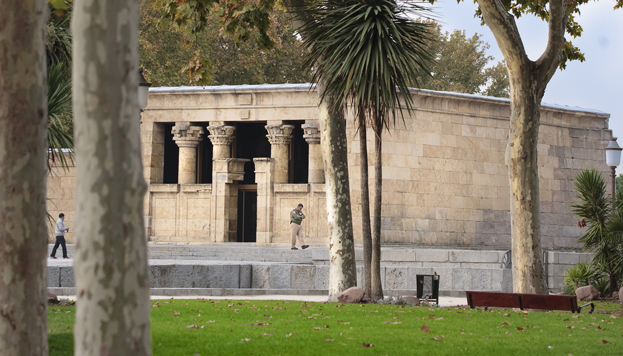 As far as my daughter was concerned, and as the good chiquitecta  (or “kidditect” – a member of the aforementioned Chiquitectos workshop) that she is, the best part of the story was, of course, how the temple was re-built, which she regarded as a fun building game. The temple was dismantled piece-by-piece in 1961, but the crates containing the duly-numbered stone blocks weren’t shipped to Spain until 1970.

Its re-building was extremely complicated. Many blocks had lost their numbers and there were only a few photos and plans of the temple to go on. It was decided to copy the temple’s original orientation (east to west) and re-construct virtually the entire façade and its columns, which had unfortunately been destroyed in the 19th century.

Unlike the gifts which Egypt gave to other countries, this is the only one that is not kept inside a museum. This means it has suffered greater deterioration, and restoration work, though somewhat poorly executed, has been necessary on more than one occasion. Yet it also turns the park into a fantastic, open-air setting and the perfect place to enjoy Madrid’s amazing sunsets.

Then, once the sun has gone down, if you stand by the balustrade behind the fountain, you can almost see the sea… Purely wishful thinking in this case, as the “sea” of trees is actually Casa de Campo (the largest park in Madrid) which, with a little imagination, becomes our own private ocean, if only for a few precious moments. Thank you Almudena!