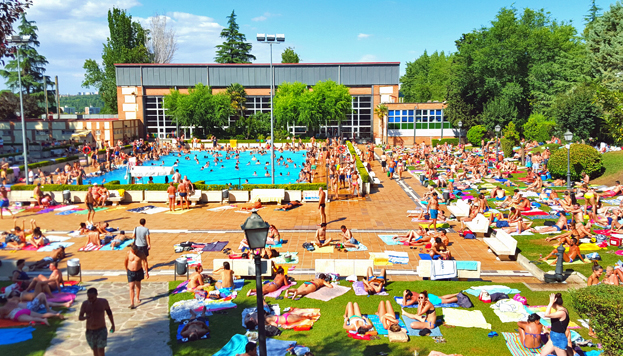 Summer is in full swing and much of the mass-holiday-exodus has begun. Sometimes it seems as if half the city has made a beeline for the beach, leaving the city ticking along at a slower yet eminently more relaxed pace. So where does that leave those left behind to deal with scorching summer temperatures and all that extra time on their hands? Well, when it comes to riding out the leisurely month of August, Madrileños head to the pools. 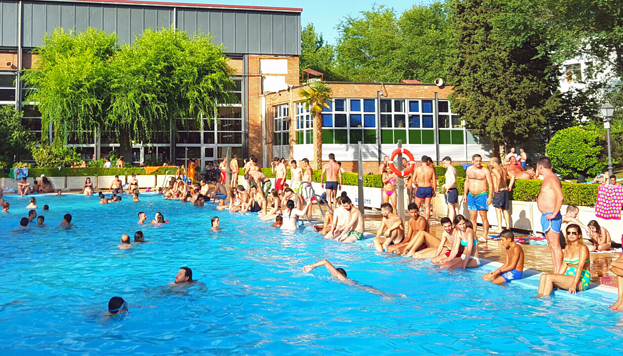 Dotted around the city, these municipal hotspots are not just the ideal place to cool down, they are also vibrant microcosms of the city’s inclusive, laid back, and friendly atmosphere. One of Madrid’s most popular pools is the Centro Deportivo Municipal de Casa de Campo – known more colloquially as “La Piscina de Lago.” If you’re looking for some respite from the Spanish capital’s interminable heat wave, the Lago pool is not only a refreshing solution, it will also give you a glimpse into an authentic aspect of summer life here in Madrid.

To avoid sticking out like a bright beach towel, you might want to brush up on the local poolside etiquette before you pack your bag. Learn how to get there, get au fait with the pool’s dress code, find out how to stake out the best spot on the grass, and navigate through the surprisingly complex cafeteria. With these tips, the only thing you’ll need to worry about is your tan. 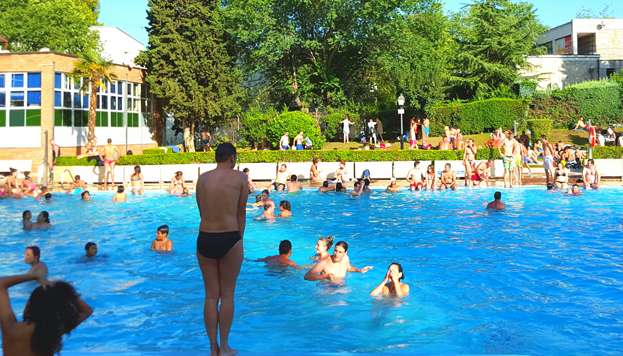 Despite its location on the edge of Casa de Campo – Madrid’s largest urban park –getting to the Lago pool is a surprisingly quick and easy metro ride away from the city centre. Catch the number 10 line from either Tribunal or Plaza de España in the direction of Puerta del Sur – the station for Lago (which is conveniently named Lago) is just two stops from Plaza de España. Once you arrive you only have to exit the turnstiles, veer a little to the right, walk uphill along the footpath and you’ll arrive at the gate and pay booth. Keep in mind that opening hours are from 11am to 9pm (although staff might start shuffling you out at about 8.30pm) and you’ll need to pay a €5 entrance fee on weekdays and €6 on the weekends. These are set prices that are applied to all of Madrid’s municipal pools. 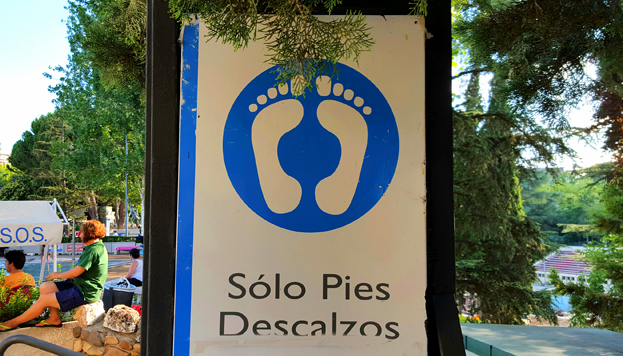 The first thing you’ll notice after you climb a few steps and then round the corner of the main building is a big sign saying Solo Pies Descalzos (Barefoot Only) and a local staff member is usually on hand to enforce the policy. The basis for this rule is hygiene but strangely, it is also applied to the cafeteria. However, so many people walking around barefoot is reminiscent of a scene from the beach – and maybe that’s the idea. Other conventions to be aware of include giving yourself a quick shower before jumping into the deep blue pool (these showers are conveniently located alongside the pool itself) and not jumping into the water fully clothed – but that’s just common sense isn’t it? 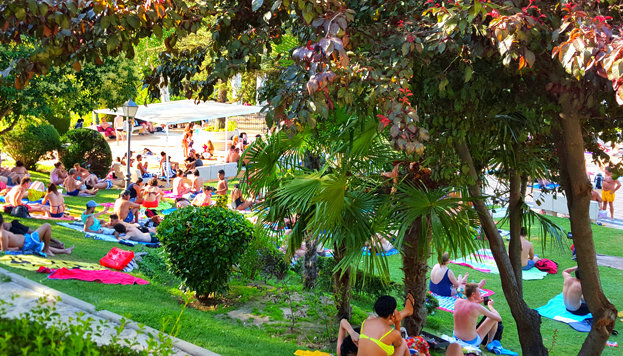 3. Staking Out Your Spot

Now for the important stuff – where to sit. There’s plenty of grass to lay down your towel. The stretch along the back of the pool is the most popular because it is the most sun-soaked. The two expanses of grass alongside the staircase leading up to the cafeteria are good if you’re looking for a touch of shade. On the busy days people even begin claiming the space on the pavers around the pool. Don’t be dismayed if every strand of the lawn is occupied – head to higher ground and be ready to pounce as soon as you see someone bundling up their belongings. As soon as they leave, move in and claim your real estate. If you arrive early enough to get a spot on the grass, your towel will need to be slotted into whatever free space is available. It may end up just centimetres from the neighbouring group – so choose your territory wisely. If you’re a non-smoker scan the ground for cigarette packets and sit far away from them as possible. If you’re looking to meet some locals, sitting next to the largest, loudest, and liveliest group will inevitably result in much laughter. 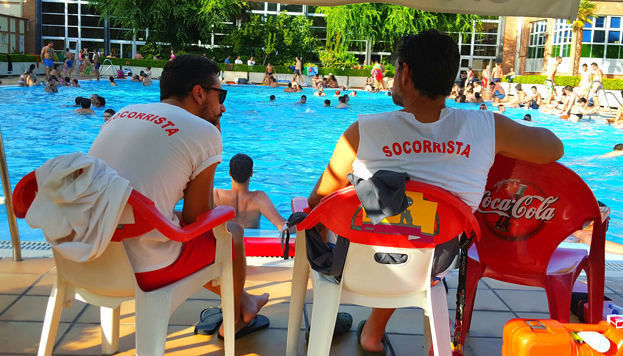 Madrid’s pools are a microcosm of the city’s social spirit. People of all ages, backgrounds, and bikini colours congregate here and interact with ease. From the young children filling up their water pistols at the fountain, to the Latino groups blasting out their reggaeton or merengue music from small portable speakers, the atmosphere is diverse, festive and relaxed. Elderly women and gentlemen still frequent the pool to work on their lifetime tans, Madrid’s colourful gay community is well-represented on the grassed slopes, while plenty of neighbourhood teenagers run around making the most of their summer school break. People have few qualms about striking up a conversation with the group next to them. Don’t worry if your Spanish isn’t up to scratch – the fact that the cafeteria serves alcohol usually gives the locals enough liquid courage to flex their English-speaking muscles. 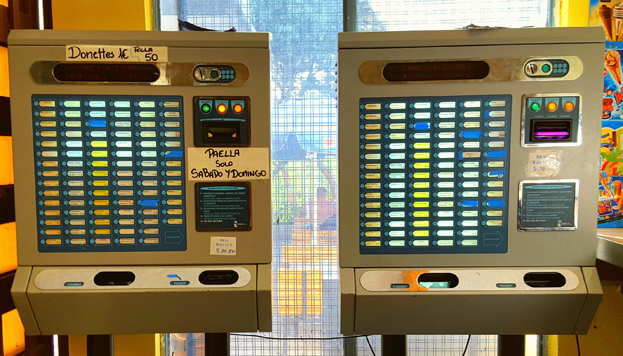 Perched on a small embankment overlooking the pool, the cafeteria serves a selection of Spanish-themed cuisine and very Spanish-sized drinks. However, before heading up to the bar to place your order, you’ll need to line up at the clunky ticket machines first. These two machines look like relics from a 1980s science-fiction film and are somewhat confusing for first-time users. You’ll need to scan all of the buttons to find exactly what you want. Unfortunately it’s all in Spanish, so you might need to ask someone for help to translate. Once you’ve made your selection, head up to the lively bar and give them your ticket(s). The food ranges from Spanish staples such as bocadillos de jamón (Iberian ham baguettes) to croquetas (croquettes), patatas bravas (everyone knows las bravas!) and tortilla española (Spanish omelette). There are also larger meals that include steaks, chicken or pork sirloin fillets served with fries, salad and fried egg. The best part of it all is the drinks selection. You can order a curiously named “Mini” (which is actually served in the biggest cup on the market) filled with tinto de verano (half red wine, half soda) or sangria. For coffee-lovers there’s even a café frappé machine. 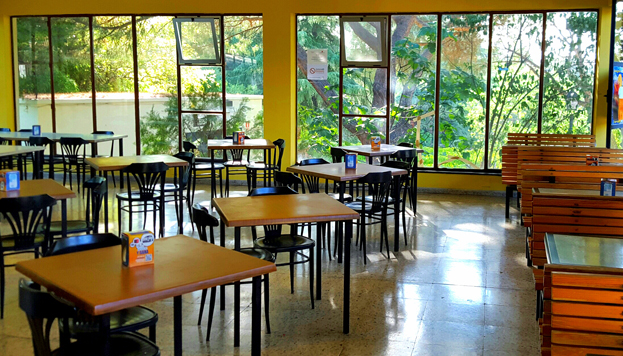 Now that you know how to navigate through one of Madrid’s most colourful and convivial public pools, try and make a day of it. Pack your towel, sunscreen, and shades and be prepared to get an authentic taste of Madrid’s summer life. Sure, the Spanish capital is hours away from the coast, but that doesn’t mean people can’t enjoy themselves during summer. And, if lounging around this pool all day puts you in the mood for a night on the tiles, you can always head next door to the outdoor nightclub AKUA (www.facebook.com/AkuaTerrazadeverano), which is even open during the day on Sundays. Just remember to pack your dancing shoes.