Welcome to the City of Hugs 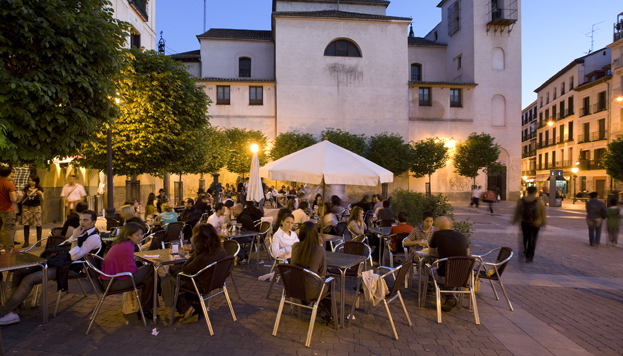 Madrid is “the city of embrace,” or at least that’s something that new Mayor has been repeating ever since she swept to power last May. It’s a line that perplexed many, especially when the Spanish version “la ciudad del abrazo” sounds more like “the city of hugs.” While a city full of hugs could make a really nice holiday destination, the Mayor and her team are eager to expand upon the idea and welcome more people to discover the city.

In recent weeks the softly spoken Mayor has elaborated; pointing to the fact that Madrid is the only capital she knows with its very own monument to the embrace. She believes that the statue, which is located in Plaza Anton Martin, is a very physical representation of Madrid’s welcoming atmosphere and general sense of openness. 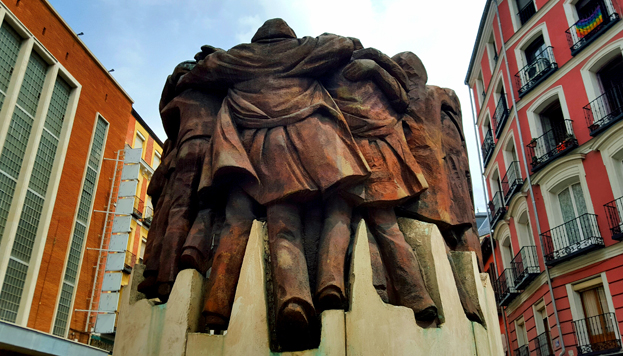 The Statue of Hugs

Whether you’re tasting the multi-cultural morsels in one of the city’s gastro-markets, making new friends in one of the many convivial parks and plazas, or looking to gain a foothold in the local art scene or business culture, Madrid has become more open than ever. If you’ve just touched down in the city, here are a few elements to look out for that will give you an authentic Madrid welcome.

The Mercado de Anton Martín market is a gastronomic testament to the Spanish capital’s increasingly multicultural make-up. Once a traditional neighbourhood food market, in recent times the two-level building has seen a wave of tasty market food stalls open that cook up exotic morsels from noon til night. Feast on the Asian treats from Buns & Bones, the Mexican flavours from Cutzamala, or the authentic Japanese from Yoka Loka. Be sure to do a quick tour around the space before you pull up a stool – the sumptuous selection of food stalls continues to grow. 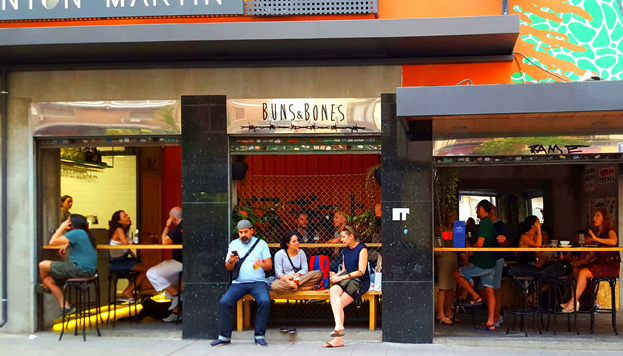 Madrid’s inner-city districts all have a distinct personality and you can spend an entire day wandering around the colourful calles to get to know them properly. Several of these barrios have welcomed in different collectives over the years and have become all the more vibrant for it. The Lavapiés district has a centuries-old tradition of being open to different cultures – in recent years it has become home for the city’s African, Middle-Eastern, and South Asian communities and the food options are therefore some of the most diverse and delicious. The Chueca district is one of the world’s largest gay-friendly suburbs and transforms from colourful retail hub by day into a festive free-for-all party destination by night. In recent times, the Malasaña and Conde Duque have welcomed in plenty of young entrepreneurs eager to launch their new enterprises. If you’re looking for some of Madrid’s most dynamic drinking holes and retail concepts then this is where you should head. 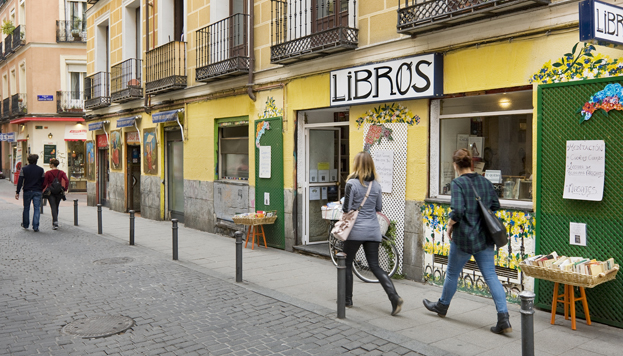 A combination of warm weather and small apartments has traditionally brought Madrileños down to the streets where they typically congregate on terraces in plazas and in parks. Some of the most social meeting points include Plaza Dos de Mayo in Malasaña, which tends to come alive at around 7pm well into the night – students from the neighbourhood’s music school can often be heard strumming their guitars too. The nearby Plaza San Ildefonso is particularly festive on warmer nights while Plaza Olvaide in Chamberí is a circle of trees and endless al fresco terraces populated mainly by local residents. The Buen Retiro Park is a popular meeting point for people of all ages and is particularly social on sunny weekends. Pack a picnic lunch and make a day of it. The area around the Monument to King Alfonso XII on the beautiful central lake has a younger, friendlier vibe and occasionally a musician will stop by to liven things up even more. 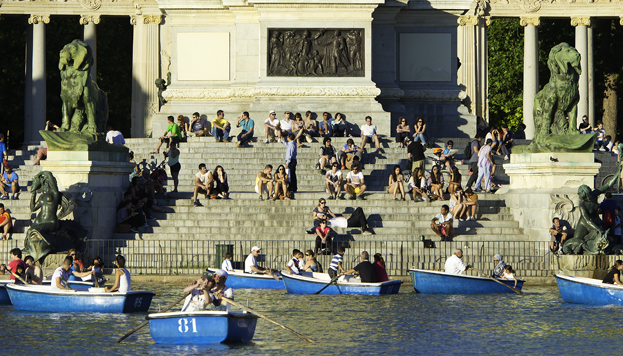 I’ll admit my bias from the outset (it’s my local) but not only is Toma Café (Calle Palma 49 in Malasaña) the best coffee specialist in town, I’m also prepared to go out on a limb and call it one of the friendliest too. The perky owners Santiago Rigoni and Patricia Alda Díaz always greet their long stream of coffee-loving customers with a smile, but are also joined by a warm and friendly – and very multicultural – team of staff who speak multiple languages and conduct regular coffee-tasting sessions. If you’re looking for somewhere to put a spring in your step as you wander around Malasaña – this is the place to do it. You might want to hug the chef too, as there’s a healthy, mouthwatering lunch menu with a Peruvian twist. 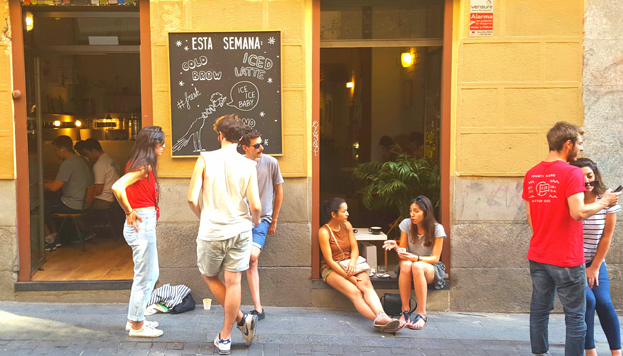 The Spanish capital is fast-becoming the destination of choice for young European start-ups – attracted by low costs and a high quality of life to help balance out work-related stress. As a result, a supportive network of entrepreneurial infrastructure has sprung up around the city. Located alongside the CaixaForum gallery, the MediaLab Prado is a hub of experimentation for students and entrepreneurs interested in digital culture and new technologies. Housed inside a refurbished sawmill, the extensive offer of activities is spread across a bilingual programme which is free and open to anyone who is interested. This year, Google opened its Campus Madrid inside a former submarine factory. In a district that flanks the banks of the Manzanares river, Campus Madrid welcomes in young entrepreneurs who are looking for a no-hassle space to work alongside fellow creatives. The Campus café has free wi-fi, plenty of powerpoints, and a deliciously healthy food menu to boot – all you need to do is sign up to become a member. If you’re planning on a more extended stay, you could also rent a desk in one of the city’s growing network of co-working spaces. 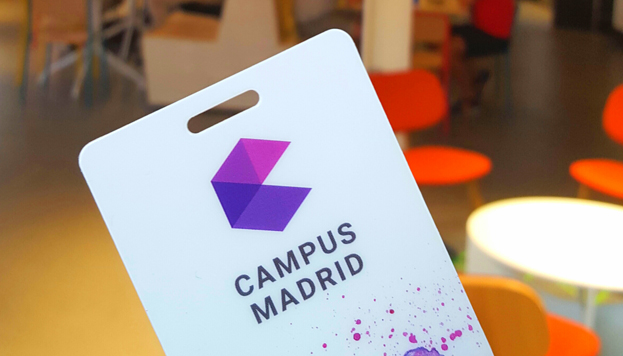 The city’s galleries are not just the exclusive domain of the elite. Some of the most eclectic public galleries also encourage participation. Visit the Casa Encendida to get a gauge on young upcoming artists, stop by the Tabacalera for a more ephemeral insight into Madrid’s artistic underground, or explore the Matadero art precinct for a inter-disciplinary art feast that ranges from theatre to design to literature and cinema. 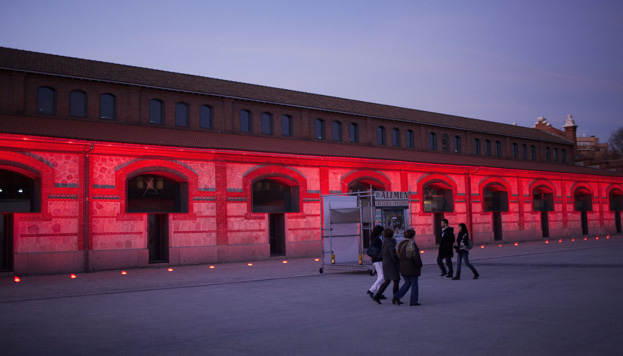 While the Mayor is eager to promote Madrid as the “City of the Embrace,” the truth is that most Madrileños were already fervent subscribers to this moniker before it even became a thing. That’s because Madrileños are quite an affectionate lot, something that becomes rather apparent when you begin to meet people and they greet and farewell you with plenty of hugs and kisses. Other quirks include saying hello and goodbye upon entering and exiting lifts; the fluidity of casual conversation with strangers in the city’s many bars; and the question that you’ll be asked ad infinitum wherever you go – “¿Qué tal?” – which is local slang for What’s up? or How are you? If you’ve come to Madrid to brush up on your Spanish, you’ll find a city full of talkative strangers very happy to oblige. 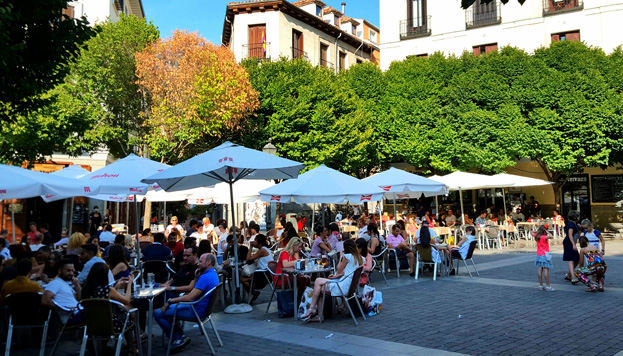