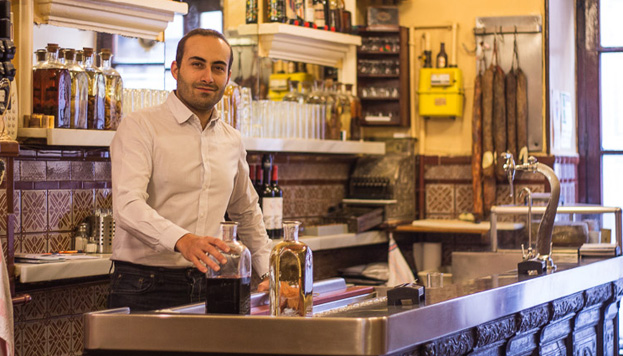 Madrid’s characterful old bars and tabernas are monuments in their own right. These living, breathing, drinking time capsules are as much a part of history as they are an enduring feature of daily life. In Madrid, bars are not merely drinking holes; they are ground-dwelling extensions of residents’ living-rooms. Places to meet, eat, chat, read, reflect, and yes, of course – drink. In recent years, Madrileños have bemoaned the slow but steady disappearance of some of the city’s most beloved bars; closing down in the face of tough economic times and the expiration of an antiquated rental law (that saw some rent prices skyrocket). Yet, some of the city’s best bars continue to weather the storm – and the ravages of time. Their survival is not only a testament to their hard-fought expertise but also to their unyielding spirit. So stake out a spot at the bar, order a caña, choose your ración, and raise your glass to celebrate this month’s best – and timeless – bar de Madrid. 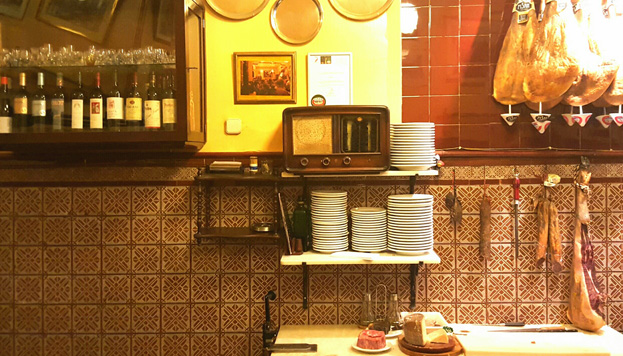 “My name is Daniel Iglesias, but the bar isn’t named after me, it took the name of my father who ran this bar for over thirty years. After his death over a decade ago, I sat down with my mother and we talked about what we were going to do with Casa Dani. I took the decision to keep running the bar even though I had studied to be an industrial engineer – and that I was only 25 years old! Yet here I am, ten years later.” 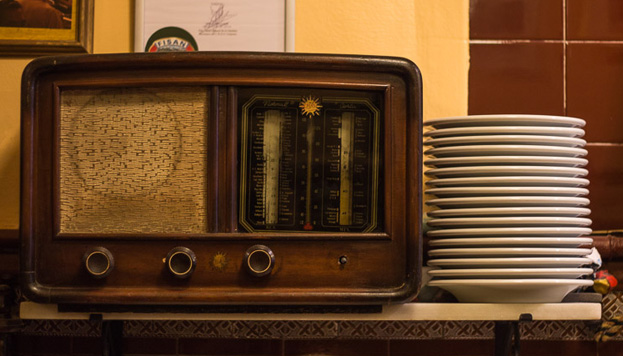 A small group of three men enter the bar and casually salute Daniel before sitting down for a late lunch.

“This place is a time machine of sorts; a preserved memory of yesteryear. The official story is that the bar opened in 1861. However, a newspaper article was uncovered that detailed a ‘rayerta’ (fist-fight) between the first owner and a customer all the way back in 1840. Either way, officially this is a bar that has been open for 125 years. The city council even came here to put a plaque outside in January, 2015. It didn’t really increase my customer base but it was an honour. There’s a certain amount of prestige that comes with being recognised by the city. Not many establishments can claim to have been open for 125 continuous years.”

Daniel lays out three small glasses on the antiquated bar’s steel basin and pours three wines for a group of elderly gentleman enjoying their late lunch.

“The history of establishments like these needs to be respected, but you also need to make it your own. My way of doing this has been through the wine. I renew the selection every now and again; visiting wineries and attending wine-tastings in my spare time. I’m always on the look out for a nice varietal that will please my customers. People change over time and we all have to evolve. It’s just like all the sequels filling up the cinemas – everyone wants to see the same thing, but in a different way.” 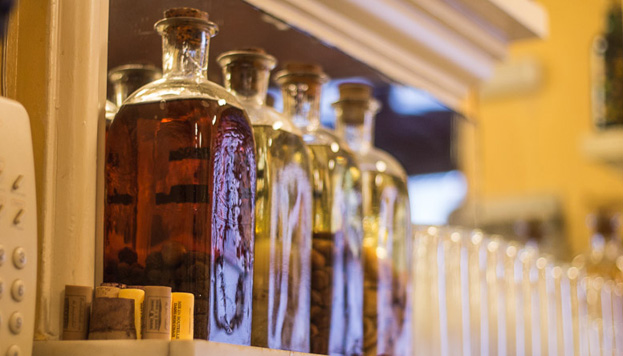 The three raspy-voiced men sip their wine and chat about politics and football.

“The essence of Casa Dani is to come and have a small wine and just soak up the atmosphere. A longstanding tradition is to pour wine from a decanter into small glasses known as ‘chatos’. I’m the one who measures the wine and each ‘chato’ only costs one euro. The wine is from Valdepeñas and it is delivered in 16L containers.”

One of the men sitting along the tiled wall yells out “¿Puedes ponerme tres pinchos de chicharrones?” (Can I have three tapas of crackling?). Daniel is roused into swift serving mode.

“My philosophy is to provide good service. People have to feel comfortable when they consume. I have many loyal customers, even groups of older customers that are known as ‘cuadrillas’. When it gets really busy we have to do things in a hurry – but being in a hurry shouldn’t come at the expense of good service. A lot of people have come here over the years, from writers and actors, to politicians and even the former King. The trick to good service is to have very agile hands.” 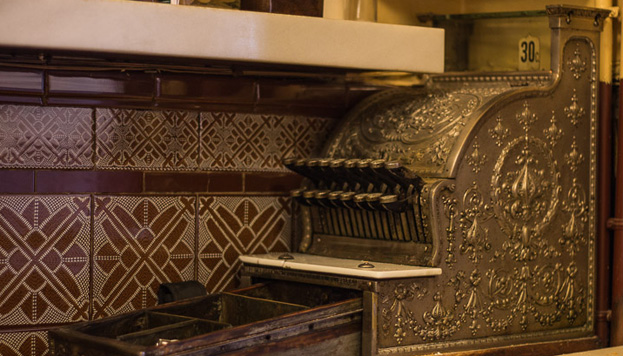 The three men munch on their tapas and order a few extra share plates from the menu.

“People come here for lunch and dinner but there isn’t a kitchen as such. We serve a selection of chacuterie, cheese, and salads. This is a taberna, not a restaurant. I source my chacuterie from my home town of Guijuelo near Salamanca. Except for the ‘cecina’ (Spanish jerky) – that comes from León. I buy it here but I’m not prepared to reveal where. That’s a secret and people tend to like mysteries…”

Daniel pours us both a caña and glances around the bar.

“The façade doesn’t say much about Casa Dani, it’s quite austere. Once people come inside though, they are pleasantly surprised by the décor. Foreign visitors often stare at the ‘jamones’ hanging on the wall. The bullfighting illustrations are from an old ‘tauromaquia’ magazine called Lidia. My mum found them and framed them. She comes here to help in the evenings. Her name is Argentina – a name which is the result of my grandfather getting confused down at the birth registry; he was meant to tell them Cristina – in the end I think the name Argentina suits her better.” 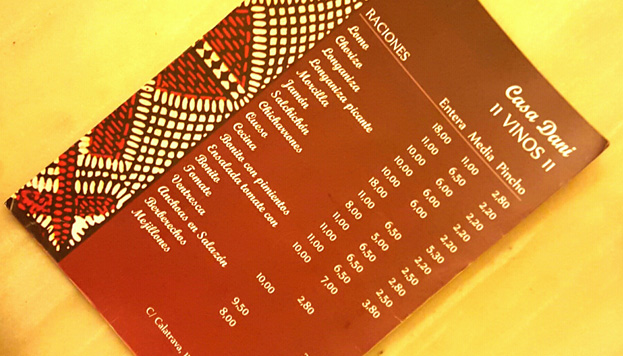 The phone rings and Daniel can be heard telling the person on the other end that he’ll be home a little later today.

“The bottles of liqueurs on the shelf behind the bar are just for decoration. Each bottle is infused with a different element – mulberry, prickly pear, raisins, fig, melon, plum, peach, cucumber, and Madrid’s famous ‘madroño’ or strawberry. They’ve been sitting there for 25 years. The tiles lining the walls are from the 1930s. Before then, the bar had wooden panels but they were removed after a government decree banned wood because of the fire risk. If you look out the back, we have another separate salon that seats 26 people. We open this mainly on weekends when there are a lot more people.” 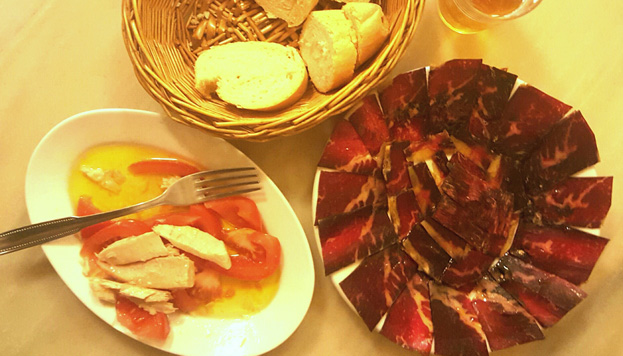 The wooden clock on the wall chimes four times. The three customers begin gathering up their belongings.

“My opening hours are very traditional – from 12.30 to 15.30 for lunch and then from 20.00 until 12.00. As you can see, sometimes I’m here a little later than usual, but it doesn’t take long to clean up and get home for lunch. Like most Spaniards, I’d like to eat at around 14.30, but my job comes first. On Sunday’s I’m closed because I need some free time to spend with my girlfriend. I re-open for the week on Monday evenings – rest is important too.”

The three men walk out the door, singing out a satisfied farewell of Hasta Luego as they leave Casa Dani.