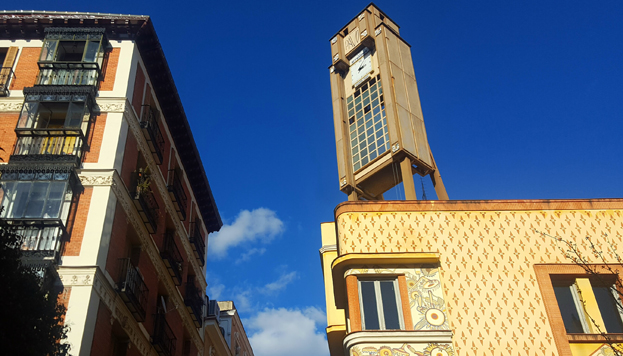 La Latina is a labyrinth of bars, restaurants and bullish antiquarians. The sheer quantity of places on offer is staggering and, if you’re anything like me, when you enter into the over-filled fray you have absolutely no idea how to distinguish between the good and the bad. So why not consult the experts? While everyone has an opinion on who serves the tastiest tapas or where to buy the best bounty of treasure, the most trusted tips come from those who live or work in the area. 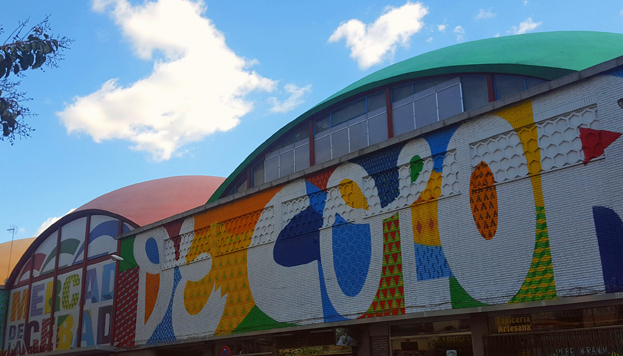 So, armed with only my notebook, I set out to create a comprehensive guide of where to eat, drink and shop based on the advice of the merchants and restaurateurs who spend the majority of their week roaming this eclectic district. For the first of this multi-part series, I asked two different vintage stores to share their favourite places. I soon discovered a district in the midst of change – especially around El Rastro – making it the perfect time to re-discover one of Madrid’s most ancient neighbourhoods. 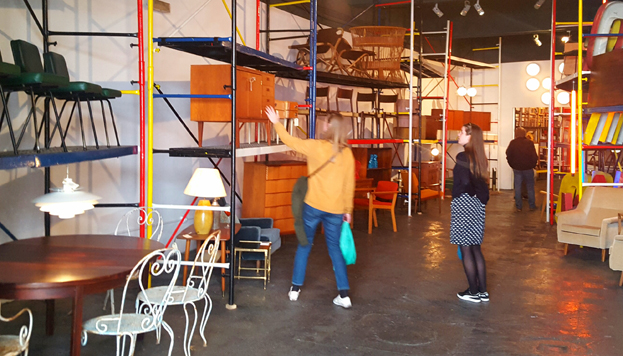 This huge emporium of vintage furniture opened a year ago inside a 700 sqare metre space on Calle de Arganzuela. Filled from floor to ceiling with mainly Italian and French furniture, the massive warehouse also plays host to the occasional exhibition and event. Overseeing it all is a young team headed by Rubén López Fidalgo. “We’ve noticed the barrio change since we opened; there’s a huge amount of young people moving here.” In IKB 191’s office I sit down with Pablo Roig Alonso, who tells me that the local aesthetic is changing. “The old elements are being progressively juxtaposed with a more modern aesthetic.” Naturally, I ask him to share two of his favourite places. 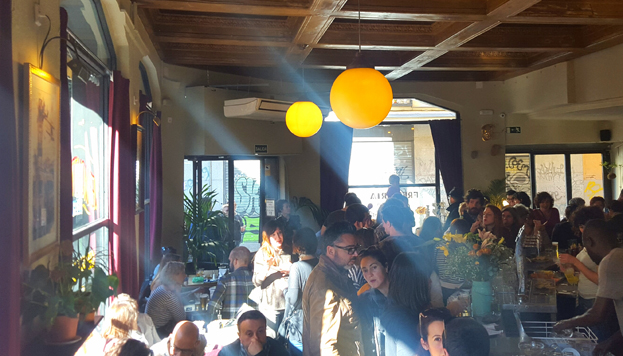 Built in 1925, this theatre is one of Madrid’s few art deco buildings and its front bar was recently taken over by a group of enterprising  friends. “The new owners have really improved the space but have respected the original elements,” says Pablo. Large windows drench the space with natural sunlight, while a false ceiling has been removed to reveal the original carved wooden beams beneath. This is an ideal spot to come for a mid-week drink, snack on some wholesome tapas, or share a rowdy drink with friends on the weekend. 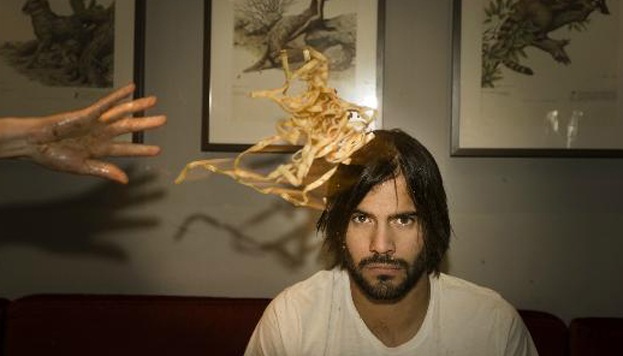 “My Argentine friend says this is the best Argentinean restaurant in Madrid!” exclaims Pablo. Located on Calle Alfonso VI in the heart of La Latina the food is a fusion of traditionally cooked meat and hearty Italian recipes. “You have to try the provolone and the empanadas,” says Pablo. There is also a touch of French creole cuisine on offer. The bistro’s Latin American provenance permeates through the space; from the name Camoatí which is derived from the indigenous language of the Guarani in South American, to the delicious menu and flamboyancy of the staff, this is the perfect spot for a cosy lunch or dinner. 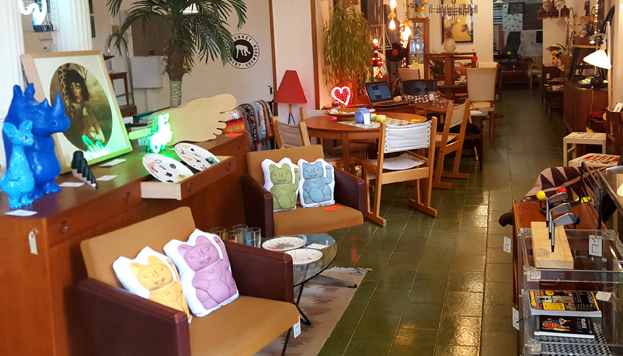 Alicia Sonlleva, Fichi Lazareno and Julian Prieto, opened their “sastrería de muebles” (tailor of furniture), halfway down El Rastro over a year ago. The part vintage store, part restoration studio, part pop-up clothing shop (in the basement) is known for its lively weekend celebrations which often involve an in-house DJ and much swirling of vermut. “We’re all about having fun,” says Sonlleva, pretty convincingly. Rubén Nuevo, who moved to Madrid one year ago after a long stint in London also works at the shop and recommended two of his favourite places to eat and drink. 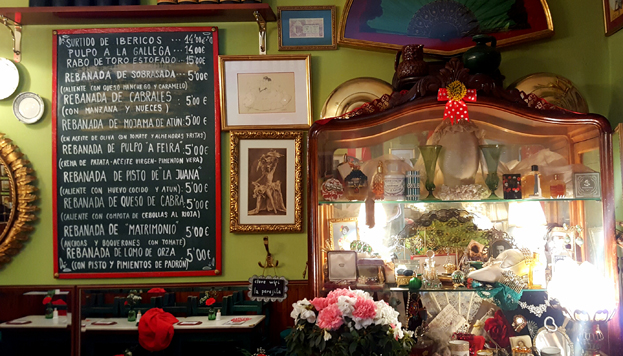 “This taberna opened eight years ago and the whole place is decorated as an homage to the flamenco singer La Perejila,” explains Rubén. Located on the popular Cava Baja strip, the mixture of Andalusian motifs and colourful pop references are a playful ode to a singer who was never actually very famous but who is celebrated almost like a saint; there’s even a couple of altars dedicated to her. Brother and sister owners Luis and Ana Boán obviously have a sense of humour but take their menu very seriously; traditional tapas are prepared with the utmost of care and a variety of specials are scribbled onto blackboards, which are all hung on the back wall. “Try the octopus,” says Rubén, who as a Galician, knows what he’s talking about. 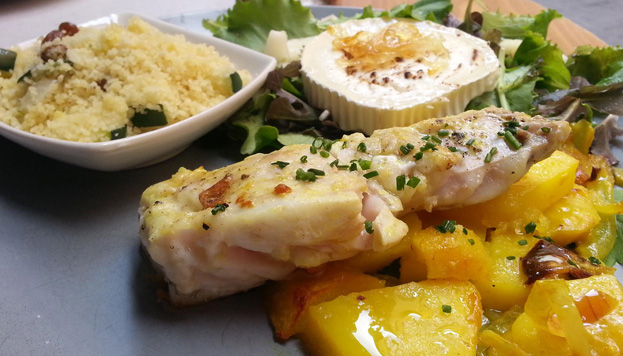 Three Pamploneses (from Pamplona) are behind this cosmopolitan café and restaurant on the rapidly transforming Rastro stip. Rubén likes it for its decoration but also spares some praise for the Mediterranean cuisine. Perched on a corner in the Plaza de Cascorro, La China Mandarina opened in 2014 inside a former Chinese clothes shop. Today, it represents part of the new wave of eateries moving into the area, giving people more of a universal choice when those hunger pangs set in. “This is a very historic district but people seem really excited by the regeneration,” says co-owner Óscar Zugasti. “I’ve been living here for fourteen years and just in the last year I’ve seen new businesses – from an artisanal beer seller, to a bike shop and even a language school – open on this street,” says Zugasti with a smile.