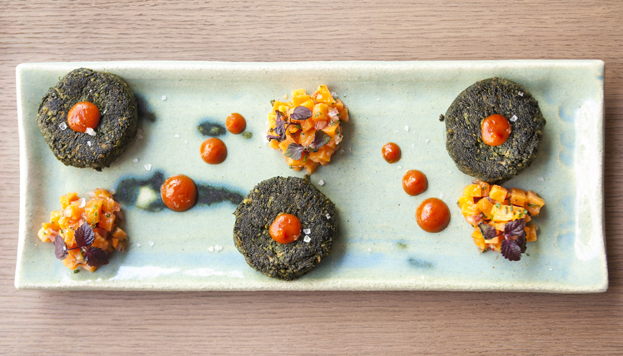 In Madrid there are lots of restaurants specialising in Indian cuisine. This dish is from Benares.

From 23 to 26 June, Madrid will be playing host to the entire Bollywood film industry as the city celebrates the annual prizes awarded by the International Indian Film Academy (IIFA). To get a feel for the occasion, you could go to Lavapiés, where most of Madrid’s Indian population lives, and eat chicken Tikka Masala, Naan bread fresh from the oven or Tandoor, plus curries packed with spices and hot flavours in these Indian restaurants that have made themselves at home in the Spanish capital. 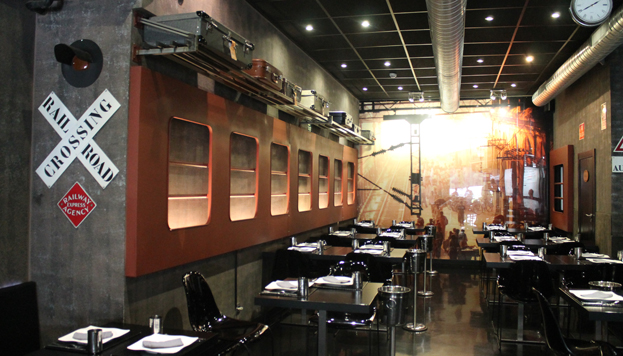 The Tandoori Station menu is a classic. The décor is very eye-catching and looks as though you’re walking into a railway station.

When you go inside Tandoori Station it feels like you’re walking into a railway station, like the ones you see packed with people in Indian films. Tandoori Station deserves its place in the hall of fame as one of the best Indian restaurants in Madrid. The menu is classic, with more than 80 dishes that recite the ABC of Indian cuisine, including starters, Tandoori oven roasts and curries. So you can try everything without wasting time on guessing, I recommend the tasting menu. The delicious starters include Keema Samosas accompanied by a spicy mint sauce, or you can opt for Raita, a sauce made with yoghurt and cucumber. Aloo Tikki are little burgers made with potato and an Indian cheese, Paneer, with just the right touch of spiciness. 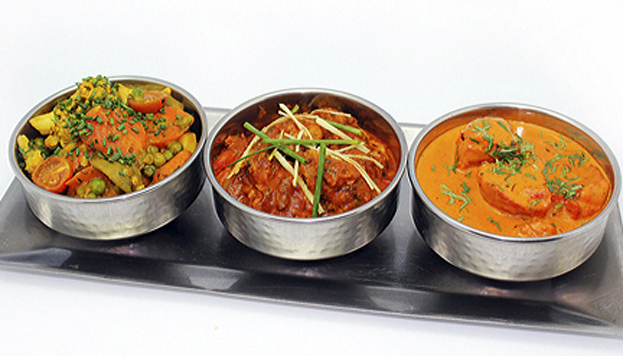 The best thing to do in Tandoori Station is try the tasting menu. Don’t miss the curries!

The Tandoori oven produces delicious chicken and lamb, nice and spicy, but their curries are the best, with the super-hot Vindaloo, originally from Goa and only for the bravest palates. As a side dish, Basmati rice cooked southern India style, and to wash it all down Cobra, a fantastic Indian beer, is the best choice. The decor is modern, in black and steel, and the open-air terrace on the Ortega y Gasset boulevard has a very pleasant atmosphere. 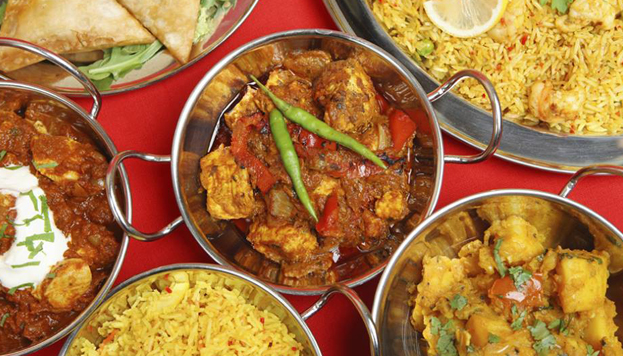 Simple and with authentic cuisine. This is Fathe Pur, where the main attraction is the curries, with varying degrees of hot spiciness.

Fathe Pur is named after an Indian city, Victoria, which is 35 km from Agra and the world famous Taj Mahal. This Indian restaurant in the Retiro neighbourhood (in Calle Ibiza, 42 and with an open-air terrace on the boulevard) is a simple place serving authentic cuisine, including Tandoori chicken, lamb and fish, plus good Naan bread, also cooked in a clay oven. Their main dishes are curries, with more than 30 varieties and differing levels of spiciness. Their Madras lamb curry is already legendary. For starters, you must try Pakoras, vegetables coated in a chickpea flour batter and fried, absolutely delicious (and gluten free), Samosas and lentil soup, a very spicy dish with a touch of coriander and featured on every Indian table. Oh, and if you can’t eat it all they’ll pack it up for you to take home. 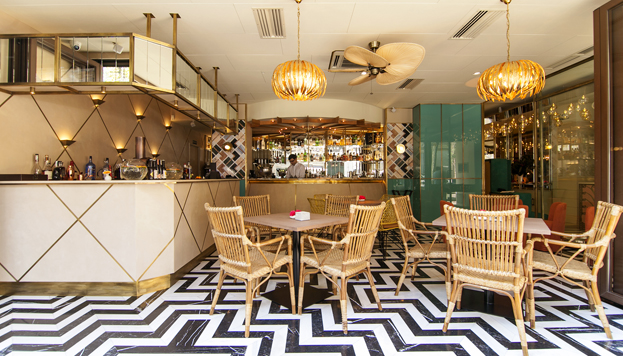 Benares is one of the latest Indian restaurants to open in Madrid. Haute cuisine is their thing.

Benares is an haute cuisine restaurant brought over to Madrid by chef Atul Kochhar, whose London restaurant has a Michelin star. I told you about the opening night a few months ago in this blog, but if you want to live the Bollywood moment I recommend a visit to its terrace and the area serving tapas and cocktails. The tapas menu includes tender Cashmere lamb with saffron and fennel, Delhi style Tandoori chicken with mint chutney, chicken butter masala and traditional Punjabi Tikka Masala – it’s worth visiting just for this dish alone. Plus a couple of excellent cocktails, my favourite, Passion Fruit Chutney Martini, with that spicy touch, and the incredibly exotic Saffron Margarita. 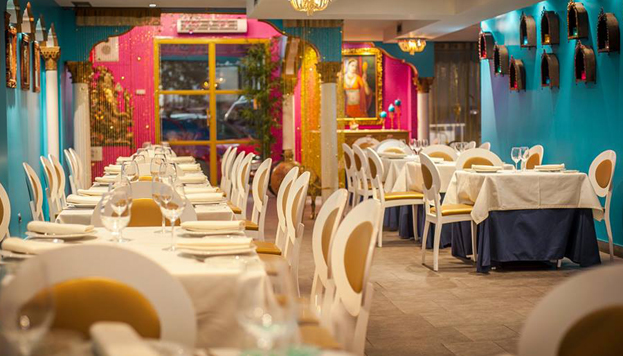 Pure Bollywood style. Vibrant colours stand out in the decor at Swagat.

Other highly recommendable eateries include Swagat, (Núñez de Balboa, 29, and Cartagena, 82), which means welcome in Indian, with decor that recreates the typical Bollywood set, full of bright colours, turquoise and pink, and looking as though actors are going to burst out and start dancing at any moment. The woman behind it, Shibani Saigal, has been living in Madrid for 30 years and after working at the Indian embassy she thought of setting up this genuine Indian venue. The starters are very good, all coated with chickpea flour batter, and the curries are delicious, but the most amazing things here are the Naan breads, which come in an array of flavours, including garlic, potato, minced beef and so on, all cooked in Tandoor ovens brought over specially from London. 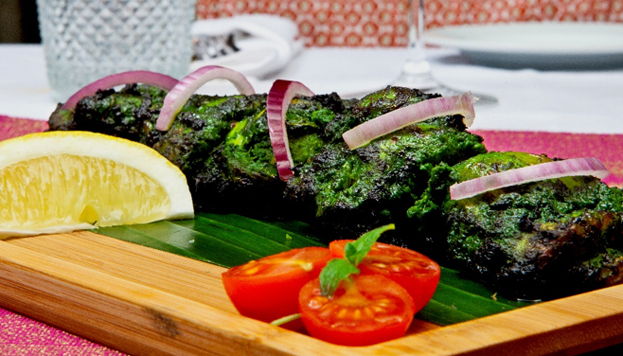 Traditional dishes but also ultra-modern Indian cuisine. This is what you’ll find on the menu at Tilk.

The newest kids on the block are Indian Aroma, near Plaza Santa Ana, with a Tandoor oven and lots of vegetarian options, and Tilk, named after the red dot that many Indian people wear on their foreheads (the Tilk or Tilak). Opened recently, it serves the very latest Indian cuisine: traditional home-made recipes presented with contemporary flair, as the management team describes them. They cook excellent Kebabs in the ubiquitous Tandoor oven, ask for Hariyali Kabab, consisting of marinated chicken with spices and basil, with a slight hint of lime and ginger. 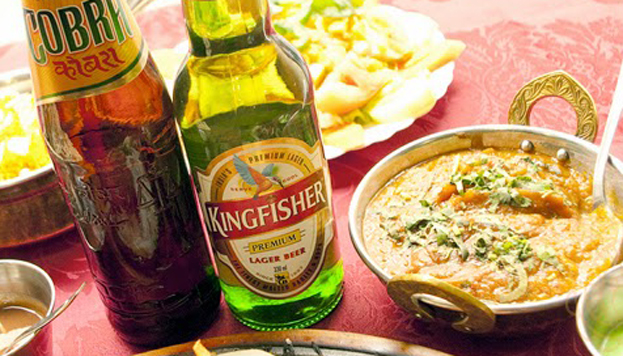 Shapla has been serving Tandoori lamb with prawns for more than a decade in Lavapiés.

Madrid has its very own Indian neighbourhood, Lavapiés. Most of the Indian community lives here, and there are so many people that they hold their own festivals, like the Holi Festival in August with a fun battle involving coloured powders. Indian gastronomy has made itself at home in Calle Lavapiés, where you’ll find a series of Indian restaurants, including Shapla at number 40, with more than a decade here, serving delicious Tandoori lamb with prawns as their speciality dish; Nueva Delhi, at number 44 and next door, Baisakhi, with menus starting at 9.50 euros, very friendly staff and just the right level of spiciness for western tastes. Right next door, at number 46, you’ll find Taj Mahal and Anarkoli, where you have to try the chicken Korma, consisting of chicken pieces with cashew nuts and coconut. And lastly Calcuta, at number 48 on Lavapiés. Order the chicken Tikka Masala here, followed by Mango Lassi for dessert.