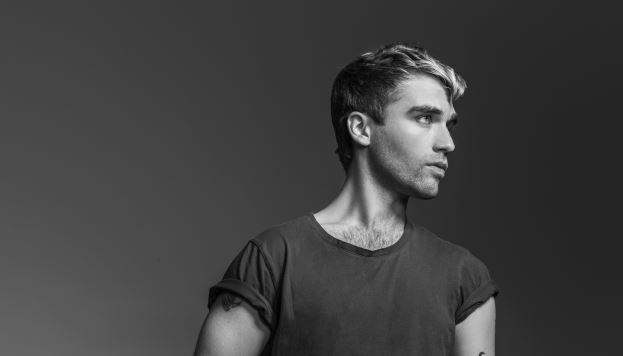 Singer-songwriter Chris Garneau, one of the most distinctive and intimate voices on the international scene, will be giving a couple of concerts on 5 and 6 May at Naves de Matadero.

Welcome to Madrid, welcome to Europe. You spent your childhood in Paris and now you’ve recorded your latest album in Lyon. What are your memories of this period and what does Europe offer you?

Yes we just finished making the album in Lyon this month which was a really fortunate experience to have. I have been coming back to France, and much of western Europe as an adult with my music project.

I have a lot of memories of growing up outside of Paris. It was a really special time to me— I spent a lot of it outside and alone. I had friends, but we lived remotely. I used to bicycle all over the countryside. I spent a lot of time in the forest and parks near our house. I drew maps of how I imagined the town to be in my world. Neighborhoods were territories with new names that I invented, houses were castles, parks were jungles, I buried things in the ground. I lived very fantastically. I did also spy on a lot of neighbors as well. I went through phases as children do. I definitely decorated my life with fantasy to escape the real world.

When I was in the real world though I was in school. And unlike in the US, France has a distinctive focus on the arts, which is often included in children’s daily studies. The most discipline I showed towards classical piano were during the years I grew up there.

As a family, we traveled around Europe during the summers. I saw many regions that I fell in love with. When we moved back to the US I think I knew that I would have a relationship with this part of the world again.

How has classical music influenced your work?

Classical music has undeniably become this foundation for my music, or I describe it as more of an ocean, where my work can, and does, exist. I think you can listen back to older songs of mine and hear definitive undertones of a Bach Invention, a Grieg or Beethoven sonata. I studied so many composers and performed a huge amount of their works in concert halls in Paris and New York City until I was about 16 years old. I stopped because I wanted to write. I started studying jazz in my early teens, when I also got very into Nina Simone, who was a very accomplished classical pianist as we know. When  I started branching out beyond classical music, it all started to make a lot more sense to me.

And chanson française? Do you think it has influenced your music?

I think it has to some degree, yes. I remember listening to Francoise Hardy a lot at home with my mother. We aren’t French, and though we listened to some French artists at home, I didn’t quite grow up with chanson the way most children in France do. But it definitely entered my brain over the years and I’m sure has been influential through the subconscious.

Loneliness and the definition of sexuality are recurring themes in your lyrics. Do you think we’re seeing the early signs of a new gay sensitivity that’s different to that of a few years ago?

I think that loneliness, and specifically the trauma from feeling alone, or different, is pervasive throughout the queer community and always has been. I’ve introduced stories in my lyrics around sexual terms for sure, but not in an effort to define sexuality. That was just how my life happened. Anyway that interpretation is not up to me. I find the most profound ideas of loneliness and growing up queer to be directly linked.

There are stresses that we keep covered for so long. I think those stresses carry on over generations, and everything later reflects that.  The work being made by a lot of queer artists right now is so bright and bold. It’s often very spiritual and supportive. I hope it’s easier to hear and see now because I want people who need that support to be able to find it – I don’t want any child, or person, to feel alone.

Some Spanish audiences discovered your music after your version of Between the Bars was featured in Pedro Almodóvar’s 2011 film The Skin I Live In. What do Almodóvar’s films mean to you and what do they have in common with your music?

The first Almodovar film I saw was Talk to Her when it came out in 2002. I was living in Brooklyn with my boyfriend at the time. I remember feeling blown away by it, especially at that time, I was nineteen or twenty years old and hadn’t seen much good film yet. Over the next few years I saw pretty much everything he made. There are so many underlying themes that cross over between his films and my music for sure. The narratives cover a lot familiar topics for me, from maternal figures, strength, and survival….to drugs, abuse, rape, incest, etc.  — those are all common undertones or often themes for me.

By the time The Skin I Live In came and we were approached by the team to license the song, I was taken aback and so honored. I really love this film. I think it is impeccable and astounding, ingenious, and really beautiful.

After your concerts, what would you like to do in Madrid while you’re here?

This is my first time in Madrid! I don’t really know what are the main things to see. I’m sure there’s a ton of really beautiful and cool old shit to see. I’ll  probably see some really old shit, eat really good food, and party!