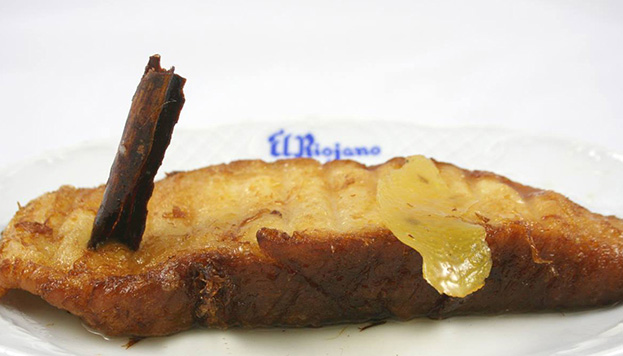 El Riojano’s torrijas are always singled out as some of the best in Madrid. Now you can make them yourself!

They’re the quintessential Easter treat, with a history stretching back centuries. And they’re so easy to make at home! With the help of our friends from El Riojano, we’ll show you how to make the best torrijas (Spain’s answer to French toast). In addition to sweetening up the holidays, they’ll give you a nice jolt of energy. 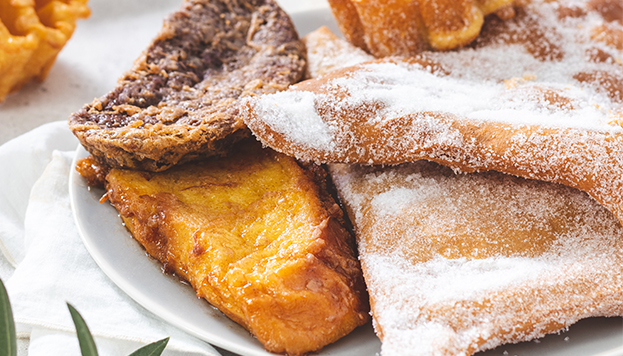 The first written reference to torrijas in Spain is from the 15th century. These ones are made by El Horno de San Onofre.

But first, a bit of history. Aliter dulcia (“sweet dish”) was the name the Romans gave to a dessert very similar to the one we can enjoy today. It was made with wheat biscuits, milk, oil and honey. In Spain, the first reference to torrejas –that’s what they were called back then– is from the 15th century. As I’m sure you know, the dish consists of slices of bread soaked in milk or wine, dipped in egg and fried. In those times it was customary to offer them to women who had recently given birth, as they were believed to have restorative properties. It’s possible that their association with Easter began because they were made to use up the bread left over from the Easter Vigil. On the other hand, some people say it was nuns who made the dish popular at Easter, to fill up the stomach after abstinence with a small amount of food that was nevertheless quite filling. In the early 20th century, they crossed over into tabernas! In Madrid, it was standard to eat them at the bar, accompanied by a glass of wine. 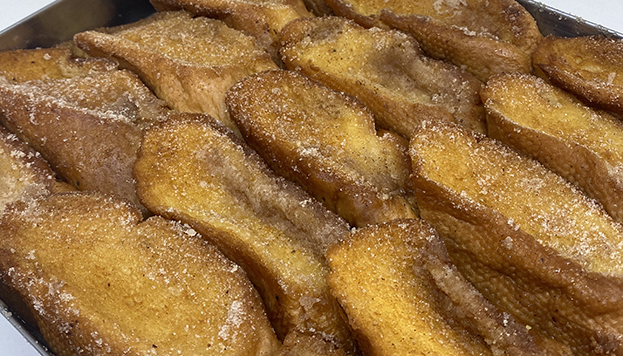 How do you prefer them: made with milk or wine? These mouth-watering torrijas are made by the Manacor patisserie chain.

It’s not very hard to make this traditional sweet treat at home. It’s a simple dish, and you’re sure to have all of the ingredients on hand. Roberto Martín Comontes is the current master pastry chef at El Riojano, one of Madrid’s most famous patisseries. Located right in Calle Mayor, it has been open since 1855. And its torrijas, with a very homemade look (golden brown) and taste, are one of its particular specialities. Take note! This is their recipe, which is sure to have the whole family smacking their lips. 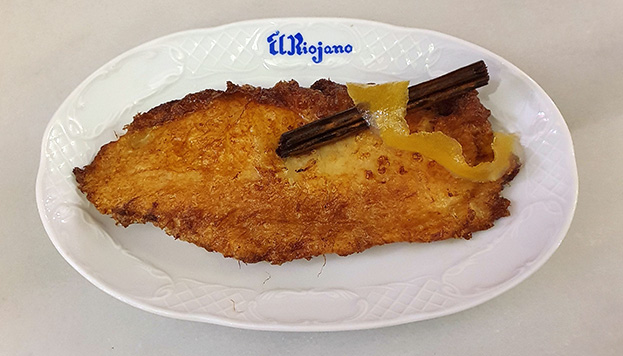 El Riojano is a member of ASEMPAS, the Association of Artisan Pastry Chefs of Madrid.

Brioche bread (you can also use day-old stale bread)

The amount of each ingredient used depends on the number of torrijas you want to make and the sort of bread you’re using. More or less, though, for every loaf you’ll need one and a half litres of milk. Although some people make really thin torrijas, it’s better for them to be about three or four centimetres thick. Before you cut the bread, you’ll need to infuse the milk. How? With a cinnamon stick and some lemon peel for at least two hours. To infuse something, you cook it very gently, never letting it come to a boil. When the infusion is ready, you can cut the bread. Before dipping the slices in the milk, add a bit of sugar to it (all amounts should suit your own individual taste, but you could try using about 200 grams for every litre of milk).

After soaking the slices of bread thoroughly in the infused milk, let them sit a while to drain out the excess liquid. How long you need to leave them will depend on the type of bread used. Ideally, you want all excess milk to drain out. Otherwise, it will come out in the pan and the oil will really splatter. After letting the slices sit, dip them in egg, which should be beaten beforehand. Now you just need to fry them up in plenty of very hot olive oil.

After they’re fried, you need to pour a light syrup over them. To make the syrup, you’ll need one litre of water, 175 grams of sugar, a cinnamon stick, some lemon peel and a tablespoon of lemon juice. Gently boil all of the ingredients together for four or five minutes. Important: you need to let the syrup cool before pouring it over the torrijas, and then they’ll be ready! Note: in this recipe, you can use white wine instead of milk. All of the steps would be the same, but you’ll want to use a bit less sugar: 150 grams per litre of wine would be better. Now all that’s left is to enjoy them!