Come back to the city centre! 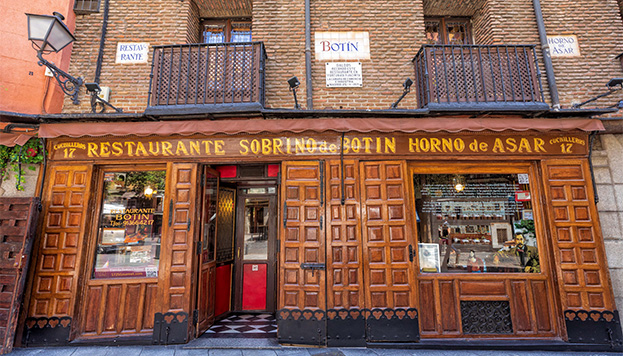 Some opened their doors centuries ago, while others are new arrivals. But they all have something in common: their location. They’re all in the vicinity of Plaza Mayor and Puerta del Sol. This area is full of bars and restaurants waiting to be discovered. You’ll find some of them on the illustrated Map of Century-Old Restaurants & Tabernas available at all of the city’s tourist information points. You can also download the map. 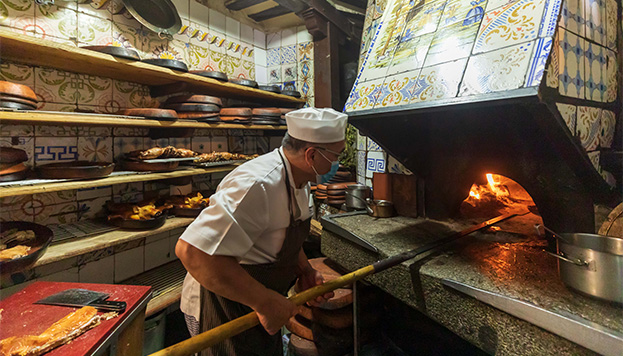 Ernest Hemingway said it in The Sun Also Rises: this is one of the best restaurants in the world. It’s also one of the oldest, a fact corroborated by the 1987 edition of the Guinness Book of Records. What’s more, Francisco de Goya worked here as a dish washer. Founded as an inn in 1725 by the nephew of the wife of a French chef named Jean Botin, today it is unarguably one of Madrid’s top restaurants for traditional cuisine. House specialities include roast suckling pig and Castilian-style lamb roasted in a holm oak-fired oven that’s as old as the restaurant. You can also find other dishes, however, such as tasty line-caught hake, fresh sole, and clams in a very original sauce. The restaurant has four floors, all of which retain the ambience of years gone by. 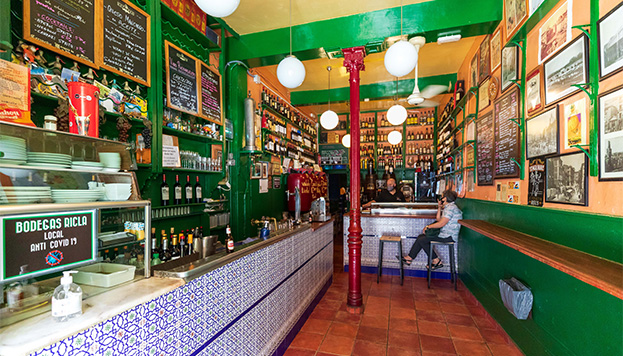 This wine bar is named after the Aragonese home town of its founders, who settled in Madrid in the late 19th century. They mainly sold wines from their birthplace, but little by little they began to broaden their gastronomic horizons. The vermouth on tap and well-poured cañas, or glasses of beer, are accompanied by marvellous tapas and raciones (small platters) and the atmosphere is utterly traditional. Any guesses as to the food? Anchovies marinated in vinegar, cured beef from León, delicious tripe with a hint of heat, and slices of bread topped with cod and olive oil. A truly classic institution. 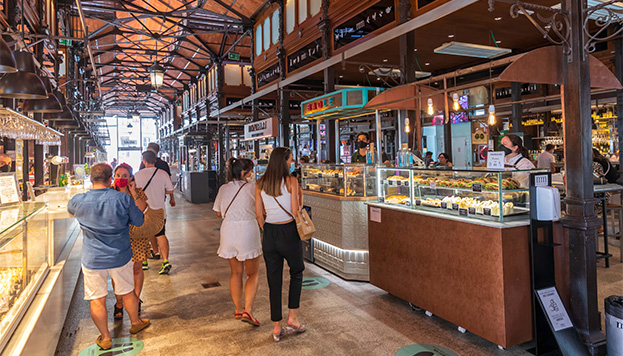 Built between 1913 and 1916, this former market turned gourmet food mecca is a prime example of the city’s cast-iron architecture. Inside, you’ll find stalls, bars… and all sorts of options to choose from! Maybe you’ll fancy the ice cream by Jordi Roca at Rocambolesc, the Mexican delights by Roberto Ruiz at Tacos, Margaritas y Punto, paella from Rodrigo de la Calle, croquettes from Arzábal or scallops from the historic restaurant Lhardy (no. 8 Carrera de San Jerónimo), which also has a branch here. 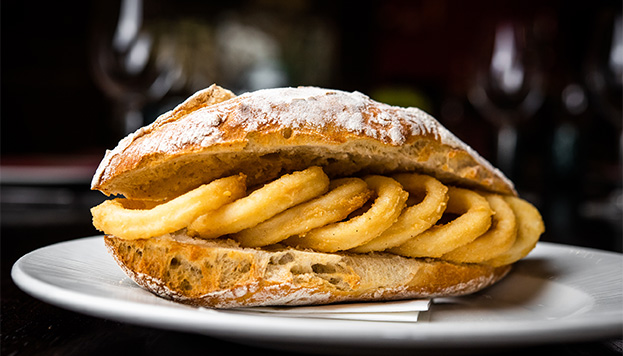 With two outdoor seating areas, one of them in Plaza Mayor, and multiple dining rooms inside, this restaurant over a century old is an institution in the city centre. Its speciality is suckling pig, slow-roasted in the oven to a succulent, crispy finish. But then again, who can resist its calamari sandwich? 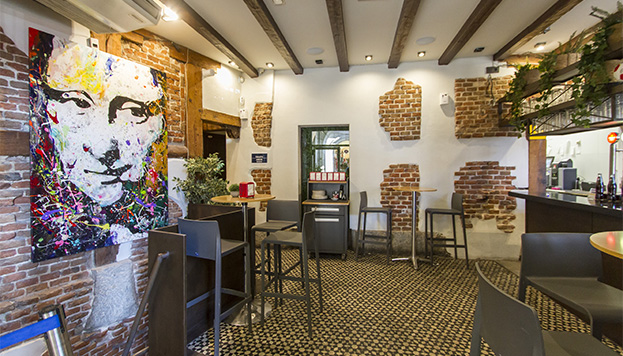 The name of this restaurant, which serves Spanish cuisine with a modern flair, reminds us that Plaza Mayor used to be called Plaza del Arrabal. The menu has a bit of everything: from churros and hot chocolate for breakfast to homemade croquettes to suckling pig and potato mousse. 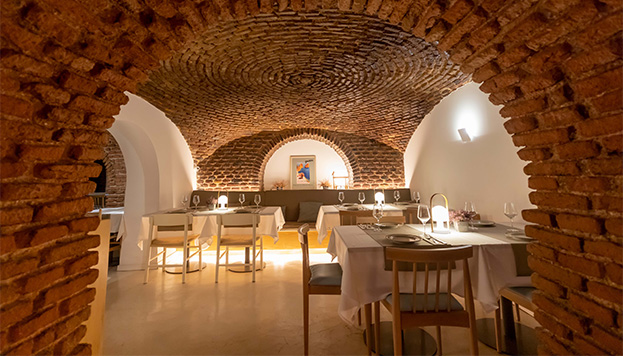 This restaurant is in the square’s south-west corner, next to the Arco de Cuchilleros arch. You can eat inside in one of the caves or sit outside on the lovely terrace. The house speciality is paella. Options include vegetable paella, seafood paella and “black rice” (from squid ink) with artichokes. The tapas menu is extensive: patatas bravas (diced potatoes in a spicy paprika sauce), Galician-style octopus, garlic prawns, etc. 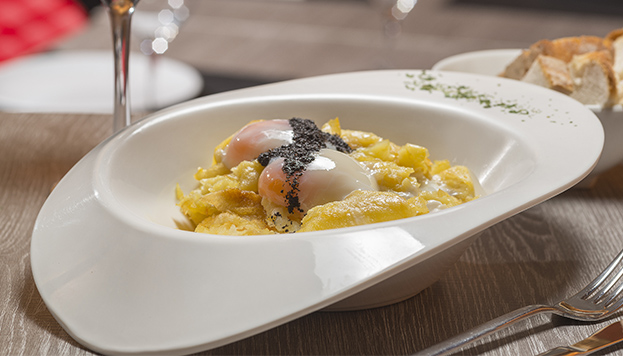 The owners decided to convert the family’s old wool storage facility into a restaurant whose interior retains some 16th century caves that make it well worth reserving a table The Iberian pork ribs are the signature dish, but make sure to leave room for dessert. We recommend the cheesecake: it’s soft, creamy and topped with red berry coulis. 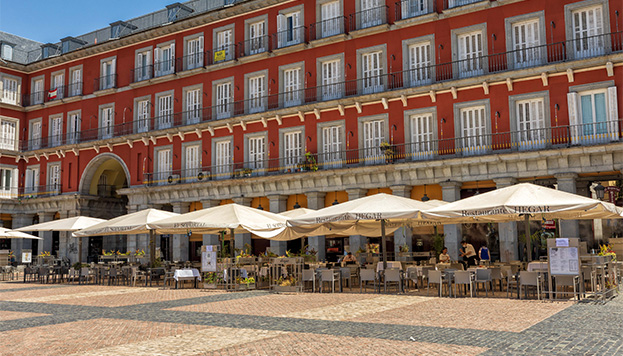 The extensive menu offers traditional cuisine made with top-quality ingredients, although innovation also has a place in dishes like the oxtail bao buns with kimchee sauce and mint leaves. The outdoor dining area is always very crowded. This is a more casual venture by renowned restaurant Villoldo. The menu is fun, simple and perfect for sharing and snacking from midday until well into the night.  Customer favourites include patatas bravas with a light garlic mayonnaise spiced up by ñora, choricero and chili peppers, grilled chipirones (baby squid) with crunchy oreja (pig’s ear), and rabas de peludín (battered strips of giant squid) just like the ones served in Santander. 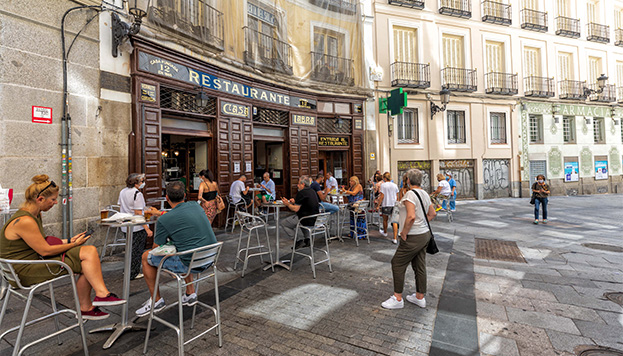 Cod dishes are very typical of Madrid’s cuisine, and this pub over one hundred years old, founded in 1860 right next to Puerta del Sol, is the perfect place to try some. Its soldaditos de Pavía (battered cod strips) and its croquettes are utterly tempting. The small outdoor dining area is always in high demand. This gastro-space owned by charismatic TV chef Alberto Chicote is on the top floor of El Corte Inglés, right in Puerta del Sol, and has a terrace with views of the famous clock tower in front of which the Madrileños ring in the New Year. The menu includes rice dishes cooked over charcoal, prawn, tuna belly and potato salad served with thin, crispy flatbread, Iberian pork cheeks with truffled mashed potatoes and bluefin tuna tataki in a soy and ajoblanco(cold garlic soup) sauce. A bar with an old, familiar feel where you can eat an old, familiar treat: torrijas (Spain’s answer to French toast). They’re a traditional Easter sweet, but here they’re served all year round. The establishment is over one hundred years old and tradition reigns supreme, in the kitchen as well as in the decor, which is a blend of tile and wood. 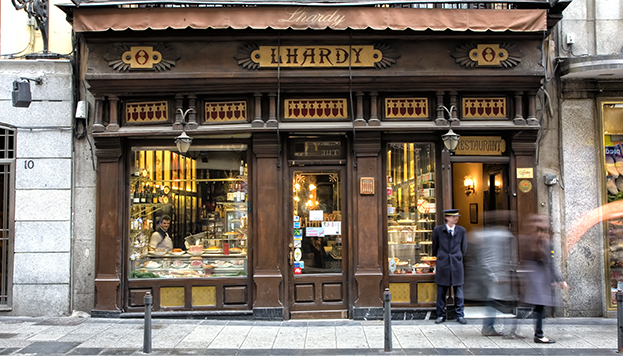