Hats for all occasions 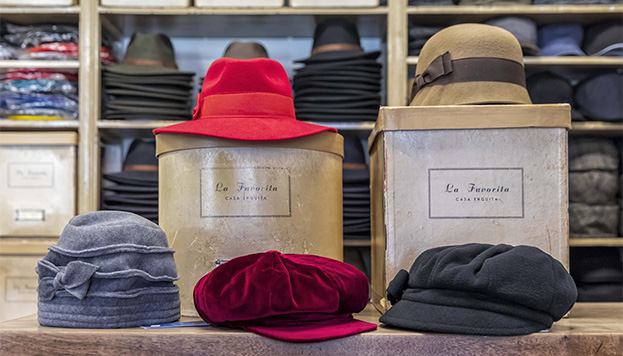 Temperatures are dropping in Madrid, and warm clothes are becoming a necessity. Don’t forget to cover up your head! In these shops –some over a century old– and workshops in our city, you’re sure to find just what you’re looking for. Wearing a hat was fashionable in the 19th century, and it’s still trendy today. 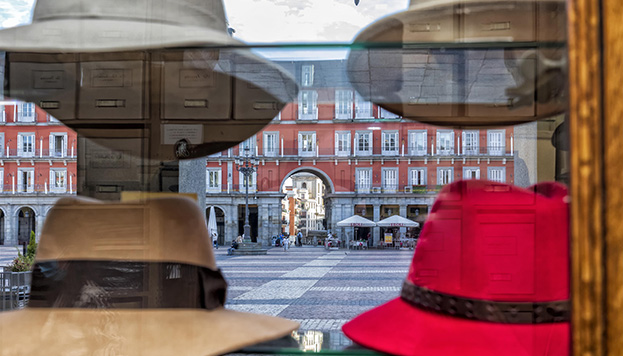 They’ve got traditional hats, with a wide brim for men and a round top for ladies, but they’ve also got caps –Greek fisherman or Derby-style– as well as berets with or without sweatbands, hats with earflaps for the winter that will soon be upon us, and much, much more. You’ll find so many different models in this shop, which is over a century old. It was founded in 1894 by Teodoro Enguita, great-grandfather to Federico, who is a member of the fourth generation to run this establishment where time seems to have stood still. The boxes that hold accessories that never go out of style are the same ones that were used back then, and the wooden counter is original too. Donizzeti’s famous opera La Favorite lent its name to this very special place, where Che Guevara himself bought his iconic beret. Most of the hats are made using artisanal techniques. There’s an endless range of sizes, and they’ll last a lifetime! 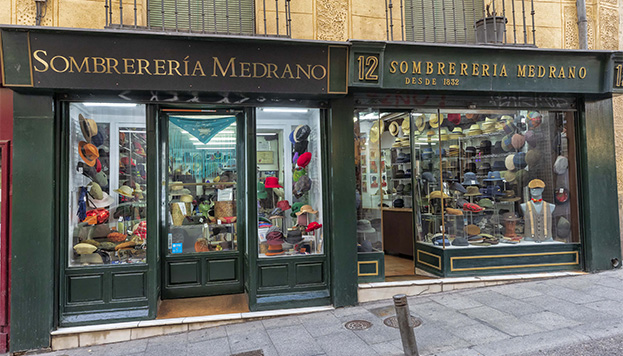 When Bernardino Abial y Roda opened this business devoted to making and selling hats in 1832, they were an everyday men’s accessory, which explains why there were so many of these establishments in the city in the 19th century. But this isn’t just another shop. It still features original elements from that era, and people from the show biz world hold the hattery in high esteem. Hats made of top-quality material, using traditional methods, are its hallmark. Orders are welcome. 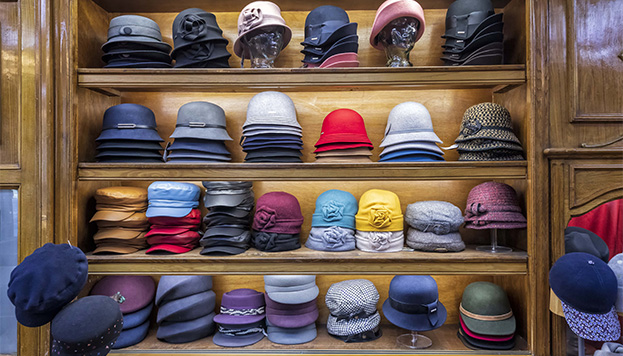 The cash register still records prices in céntimos and pesetas. Founded as a hattery and hat shop in 1886, Casa Yustas is one of those establishments where the clock seems to have stopped. The artisanal floors and wooden furniture, made of chestnut, haven’t changed since it opened. In the catalogue, you’ll find everything from classic hats to other, much more modern and daring models. The selection includes brands like Stetson, Borsalino, City Sport, Kangol and Signes. There’s also a small workshop on the upper floor that can handle any sort of order. 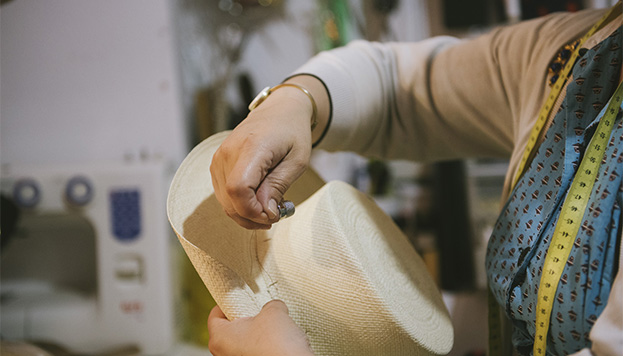 From the first to the last step, the hats at Cabeza de Calabaza are made using traditional, artisanal techniques. Irene Obeso Martín is the woman behind this Madrid firm which, from its workshop in the Malasaña neighbourhood, designs and produces every one of the models it sells. “A hat can tell you a lot about a person, and it can change their mood,” says the Fine Arts graduate, who is determined to raise the profile of a trade that has almost disappeared, and while she’s at it, make her customers’ dreams come true. You simply need to pop in and tell her what you want. She also holds classes where you can learn to make things like fascinators and turbans. 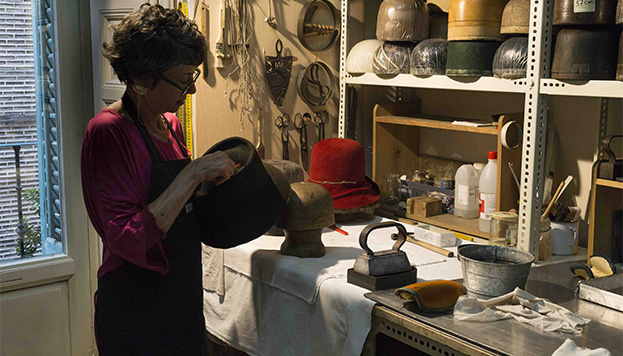 Born in San Sebastián, as a girl Henar Iglesias spent a lot of time in the hat shop owned by her mother, Charo, where she became acquainted with artisanal trades. She currently works full-time as a hatmaker and feather artist, and she runs the workshop started by her mother, who is the personification of passion and an enthusiast of a job well done. They are a benchmark in the world of fashion, always able to adapt their hats to the individual style and personalities of their customers, whom they advise on matters of colour, material and proportions. Their hats are unique pieces created using artisanal techniques perfected by generations of hatters and milliners. To visit their creative space, located in the neighbourhood of Chueca, you’ll need a prior appointment. 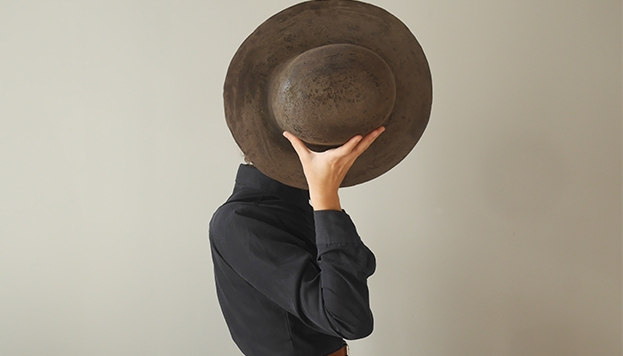 Myrte and Javier view themselves as the “rescuers of a trade in danger of extinction”. In hat-making, they found not just the pleasure of handling wrinkled surfaces, but also a profession that offers everything they consider essential: art, design, storytelling and a chance to play around. The way they make hats is very similar to how they were made one and a half centuries ago, as they still use artisanal tools and work methods. Most of the felt they use for their creations comes from old hats: they take them apart, wash them and give them a new life. They work just a stone’s throw away from El Retiro Park, in a workshop that’s something of a time machine. From their premises, they remind us that: “Our hats are genderless and don’t conform to a given dress code”. 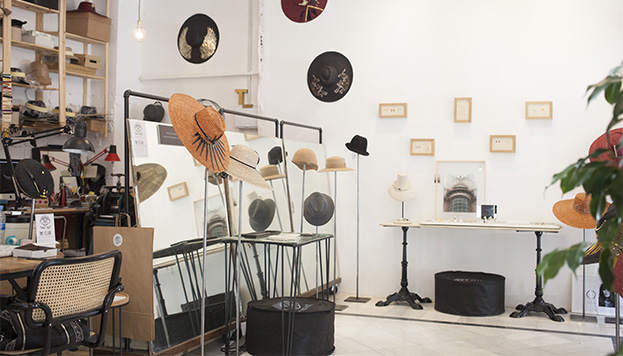 First and foremost, a declaration of intent: all of the items here are made with patience and dedication. At Hat Madrid they use artisanal methods, which means no two hats are the same. Anyone is welcome in their workshop. They love spending time with customers and bringing all of their ideas to life. Their philosophy revolves around a love of design, quality and preserving a wonderful trade. 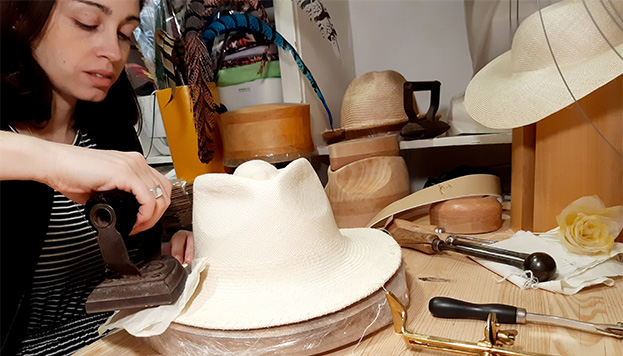 Musician and orchestra conductor José Miguel is the visionary behind this venture. Matilde, who has a degree from the Academy of Costume and Fashion in Rome, is a hatmaker and designer. Together, they have created a space where artisanal craftsmanship and the tradition of authentic hat-making come together, in order to offer their customers a customised look. In their shop and workshop in Barrio de Salamanca, in addition to a wide selection of models available to try on you can also order something unique and special, ranging from gentlemen’s hats to fascinators, under their professional guidance. They explain their philosophy as follows: “We believe there’s a world where you can express yourself, freeing your mind from all convention”.