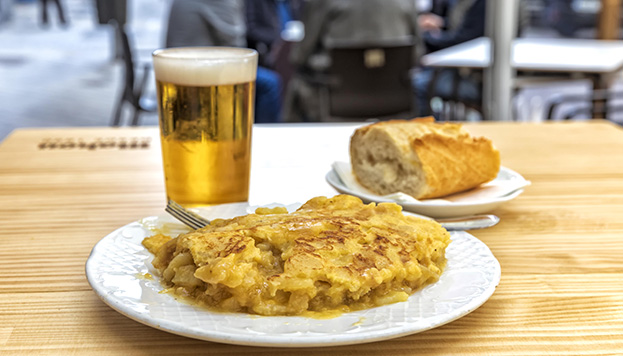 Although we really don’t need an excuse to sample one of Madrid’s most popular appetizers, here’s one just in case: 9 March is the International Day of the Tortilla. The capital boasts many a restaurant, bar and taberna that have named the Spanish omelette their signature dish. Here’s a tasty selection for you to try. 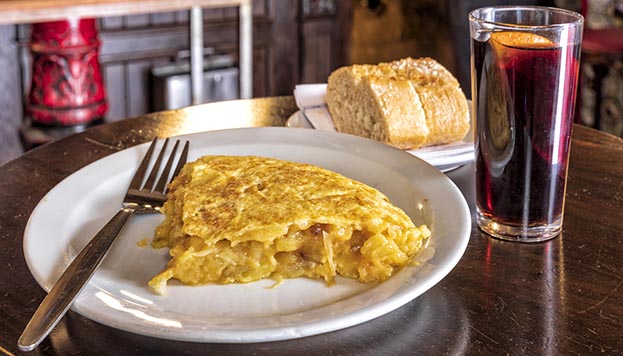 Thick or thin, gooey or well-done and, most importantly of all, with onion or without onion. There are many, many ways to make a Spanish omelette. We’re well aware that its main ingredient originated from South America, but when did this quintessentially Spanish dish rise to fame? There are legends to satisfy all tastes. For quite some time General Tomás de Zumalacárregui was credited as the mind behind this quick, easy and nutritional dish, which he prepared during the First Carlist War midway through the 19th century to alleviate the hardships of his army. However, in actual fact, this omelette can be traced back to the 18th century. It was actually invented by illustrious landowners of Villanueva de la Serena, Badajoz, when attempting to make bread from potatoes to feed the hungry masses. They initially fried it in a pan before cooking it in an oven. Luckily for us, the local women made some improvements to the recipe and added eggs! 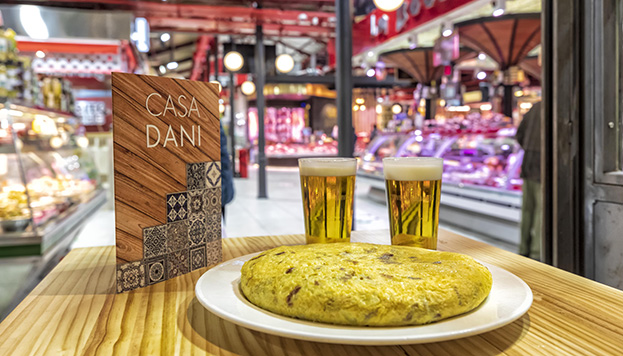 It’s a done thing in the capital to go to a bar or restaurant at midday and order a small slice of Spanish omelette, known as a pincho de tortilla. There are even areas in the city, such as la plaza de Olavide, where this modest snack is the signature dish of bars and outdoor restaurants. When it comes to places you can’t miss, we’ve got you covered. Casa Dani ­– a small yet lively bar in the Mercado de la Paz (Ayala, 28) in the heart of the Salamanca district – has been serving Spanish omelette to the delight of its customers since 1991. The beneficiary of many an award, their “world-famous” Spanish omelette, as it appears on the menu, is the bar’s specialty. Prepared using Agria potatoes grown in La Mancha and eggs from one of the market stalls, the omelette is browned in a cast iron frying pan for one minute on each side. And there you have it! Mouth-watering Spanish omelette that you can order with or without onion. 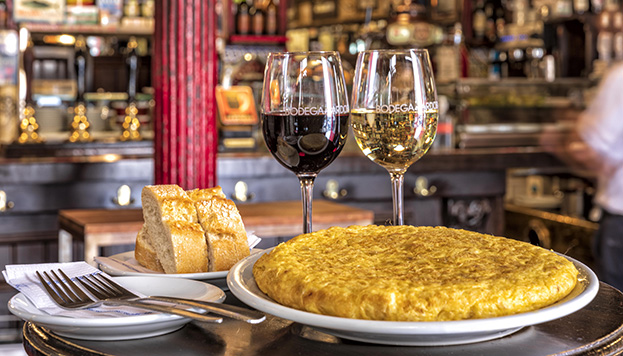 The Spanish omelette served at one of the Malasaña district’s most-frequented tabernas, La Ardosa (Colón, 13), is practically the subject of legend. Founded in 1892, the former wine cellar’s red-coloured façade and the vintage lettering above its door make it easily recognisable. It was in the seventies that its current owners, Gregorio Monje and his wife Conchita took over the bar. Conchita takes the credit for their world-renowned Spanish omelette, with there being not one guide book that doesn’t mention it. Five Mona Lisa potatoes, seven eggs, half a large onion, olive oil and salt. We thoroughly recommend trying it and, while you’re there, marvelling at the original tiles on the walls of this time-worn bodega. 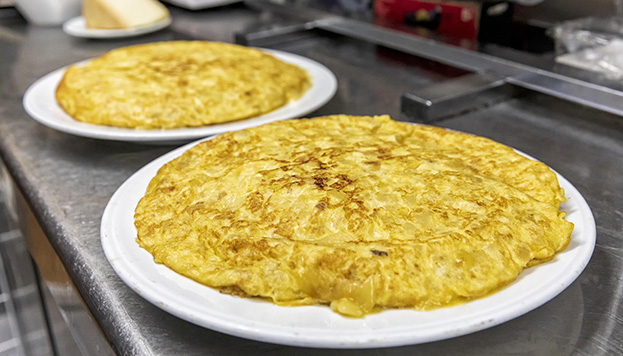 It’s difficult to name Madrid’s best tortilla, however for many it’s the omelette served at Sylkar (Espronceda, 17). This bar serving homemade dishes in the Chamberí district even boasts its very own fan base. For more than 50 years they’ve been making over 100 Spanish omelettes a day, prepared step by step to a family recipe. Here the tortilla is served barely set, with a consistency on the plate[T1]  similar to that of flan. 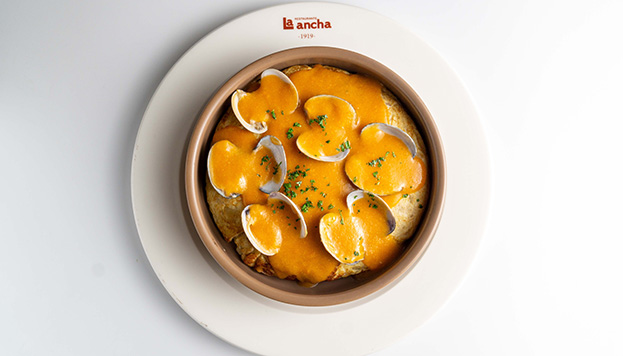 A true delicacy for even the most exquisite of palates, as is the Spanish omelette at Las Tortillas de Gabino (Rafael Calvo, 20) in the same district. The tortilla served there is known as the Velazqueña, taking its name from the street where it was first made, and is also served runny in consistency as is traditional. For those who are partial to trying new flavours, we recommend ordering the truffled omelette filled with dashes of potato foam using a siphon. Additionally, there’s the omelette served with tripe stew or omelette in a tomato and white wine marinara sauce and clams at La Ancha (Zorrilla, 7), a restaurant of the same group. 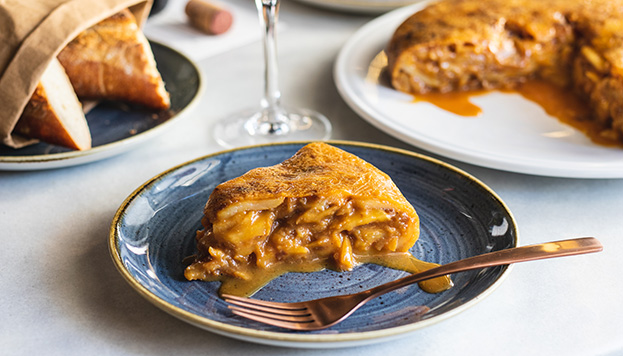 Another restaurant where Spanish omelette is the heart of the menu is Taberna Pedraza (Recoletos, 4). Here it’s prepared the way they make it in the Galician town of Betanzos: no onion, gooey and barely set, as though the potato were dipped in egg. Also not to be overlooked are the omelettes at Juana la loca (Plaza de Puerta de Moros, 4) and La Primera (Gran Vía, 1) prepared with caramelised onion. But if there is one place in Madrid that has made the Spanish omelette its symbol, it’s Colósimo (José Ortega y Gasset, 7). At the helm are José Manuel and Ricardo Romero with the likes of restaurants such as Aponiente and El Bohío on their CV. What’s their secret? Striking the right balance between perfectly cooked confit potatoes, barely set eggs and sautéed onion. So, there are three options if you want to try their tortilla: heading to the restaurant to try it first-hand, ordering it to be delivered, or having a shot at making it yourself. If you’re one for trying new things in the kitchen, you’re in luck, as we have the very recipe. 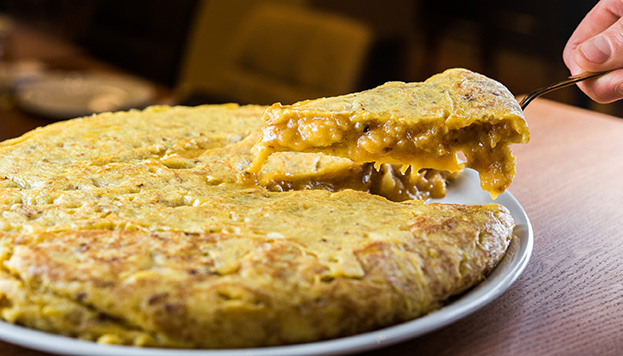 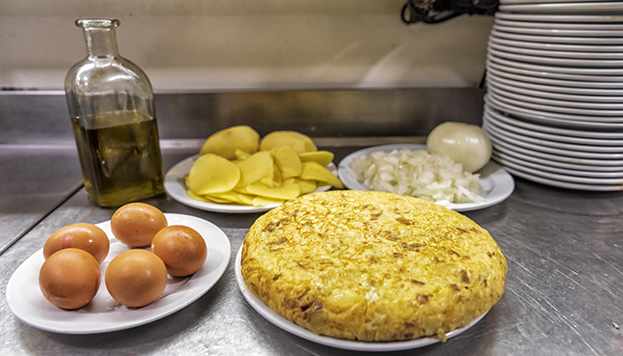 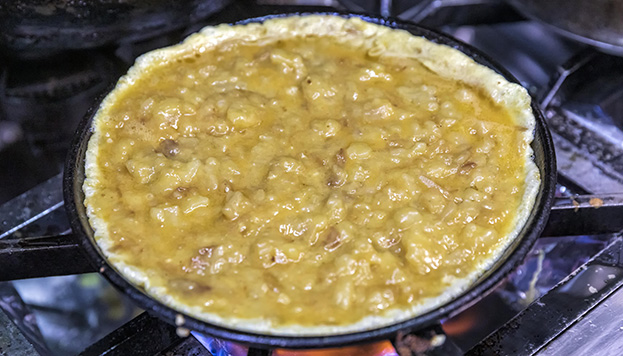 Cut the potatoes into pieces the size of a large coin (similar to the old 100 pesetas) and brunoise the onion. Add to a frying pan with the oil at room temperature and sauté slowly for one hour until golden, mixing together gently.

Whisk the egg with the salt, then add the potato and onion mixture after draining any excess oil. Cook for 30 seconds on both sides in a frying pan on a high heat. Remove and serve!