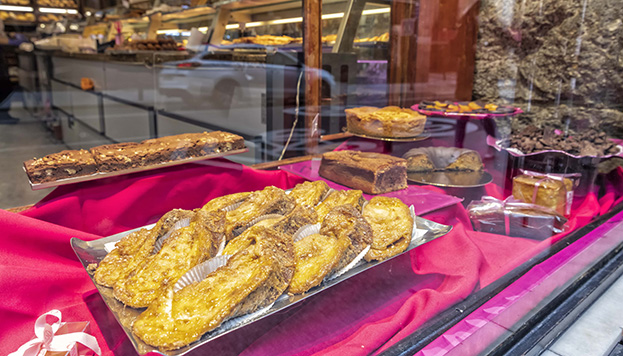 An irresistible sin that takes us straight back to our childhood. With Easter just around the corner, there’s not a kitchen in Spain that isn’t filled with the distinctive aroma of cinnamon and lemon coming from freshly cooked torrijas, the favourite sweet treat of everyone in the city at this time of year, read on to find out where you can try it. 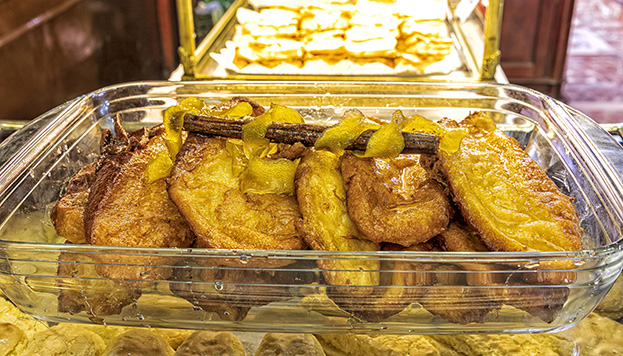 First, a little history. Aliter dulcia (another sweet dish) is the name of a dessert that is very similar to the confection we find in Madrid today. This type of sweet French toast was made from wheaten bread, milk, oil, and honey. The first reference in Spain of this delicious treat was in the 15th century, under the name torrejas. These slices of bread were soaked in milk or wine, dipped in egg and then fried. Back then it was commonplace to offer the dish to women in labour as it was considered restorative. Their link with Easter is perhaps because they were made with the bread that was left over after the Easter vigils. Yet it is also said that the modest sweet dish that is torrijas was made popular by nuns. Stodgy and satisfying, it was known to fill empty stomachs after fasting at this time of year. It wasn’t until the start of the 20th century that we began to see this treat served in the city’s most traditional tabernas. In these historic spots, torrijas were served at the bar together with a small glass of wine. To this day, this custom still prevails throughout the city, such as at El Anciano Rey de los Vinos (Bailén, 19). 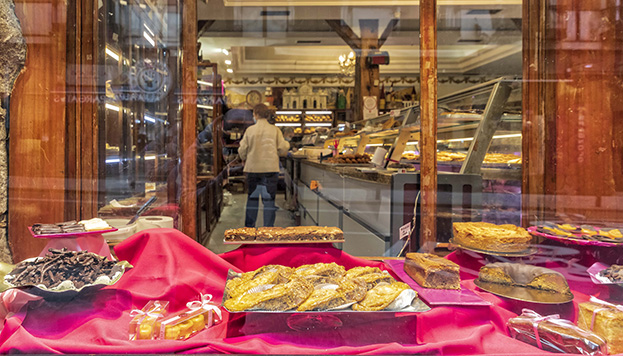 Yet, at Easter the true temptation can be found in the windows of Madrid’s bakeries. At La Santiaguesa (Mayor, 73), a family-run business specialised in torrijas, the demand is non-stop. At the helm of this renowned bakery is the Guerrero family, who are also behind the classic Horno de San Onofre (San Onofre, 3). It was here, at the beginning of the 70s, that Daniel and Emilia – the parents of the current owners – decided to break away from long-established tradition and use a type of sweet bread known as pan bombón, instead of the leftover stale bread that was conventionally used. This was the secret that led to their success! 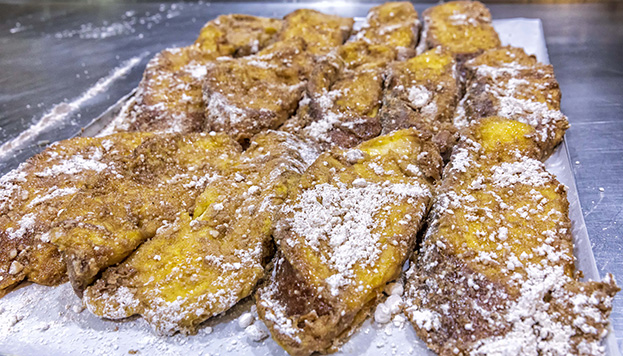 Although torrijas are not the most aesthetically pleasing dessert, their irresistible aroma of cinnamon appeals to our sense of smell and their taste, especially of olive oil, reminds us that it has been fried but in the healthiest of ways. When it comes to making torrijas, at La Santiaguesa the priority is selecting the best ingredients. Perfect for any time of day, from breakfast to dessert or even mid afternoon, this sweet treat made with egg and packed with nutrients is always sure to boost your energy. At this bakery in particular, they are soaked in milk, as is traditional. Yet you will also find the most indulgent recipe of all: torrijas doused in wine. Centuries ago, this was the rather picaresque way of getting around the prohibition of alcohol during religious holidays. 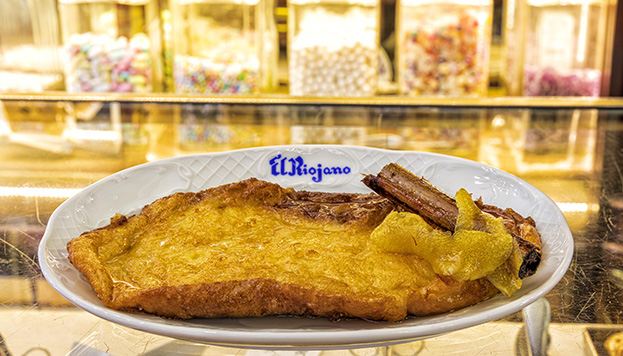 Madrid is a city steeped in torrija tradition. And they’re very aware of this at El Riojano (Mayor, 10), one of Madrid’s most famous confectioners, founded in the year 1855 by Dámaso Maza, the personal baker to Queen Maria Christina of Austria. Many are the locals of the capital who flock to this bakery for its coveted golden-brown torrijas that, thanks to their homemade touch, take us right back to our childhoods. They sell up to 800, or even more, of these sweet Easter treats every Good Friday. Their secret? The crumb of the bread must be completely soaked in milk or wine to ensure that the crust softens. That, and the dash of syrup at the end. 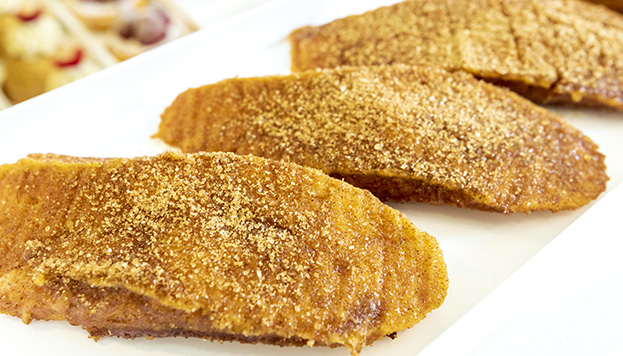 Making this simple sweet treat a fine dining delicacy is something that Ricardo Vélez could do with his eyes closed. Head chef at Moulin Chocolat (Alcalá, 77), this gourmet bakery opposite El Retiro Park adds the icing to the cake. Their sumptuous torrijas are made with perfectly fried brioche soaked in a combination of milk and cream infused with cinnamon, Bourbon vanilla and lemon rind. 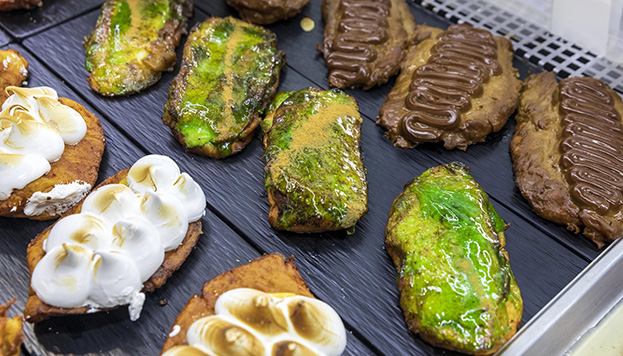 Another master of the torrija is José Fernández, whose fantastic creations at Nunos (Narváez, 63), close to the district of Ibiza, are evidence of just how much fun you can have when preparing this treat. Resembling slices of Spanish omelette, a fried squid sandwich or a hot dog, his unique torrijas come in all shapes and sizes! Each year, he presents a new tasty collection. This year’s seven creations are prepared with a variety of different milks, including goat’s, soy, oat, tiger nut, rice, coconut, and almond milk. “By using plant-based milk – except for the goat’s milk, of course – we get torrijas that are high in fibre and free from lactose”, José comments. Seven of the most moreish of sins in bite-size pieces, finished with toppings such as sesame, muesli and pineapple, make the most traditional days of the year that bit sweeter. 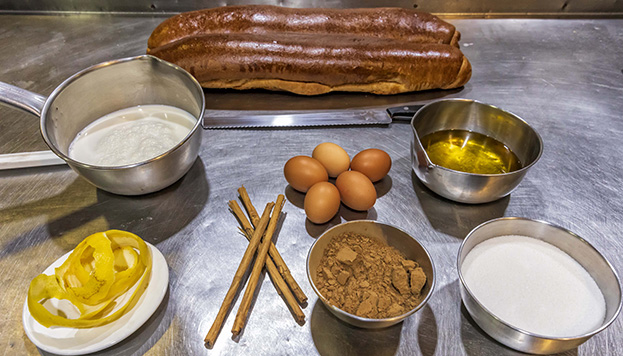 A loaf of bread

The rind of 1 lemon 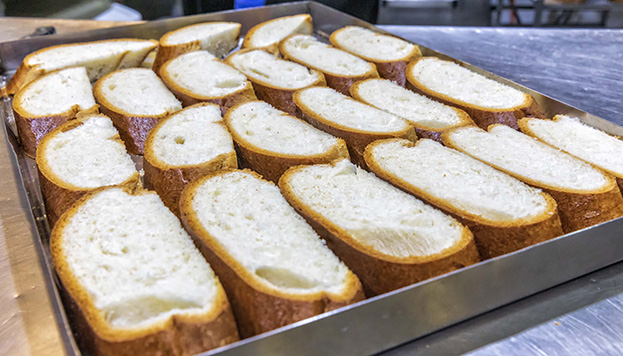 Cut the bread into thick slices (approximately one and a half fingers thick) and place them lying flat in a deep dish. Heat the milk with the sugar, cinnamon stick and the rind of one lemon, without letting it come to the boil. Once heated, pour into the dish until the slices of bread are covered. Leave until the bread is completely soaked in milk; however, it should not crumble. 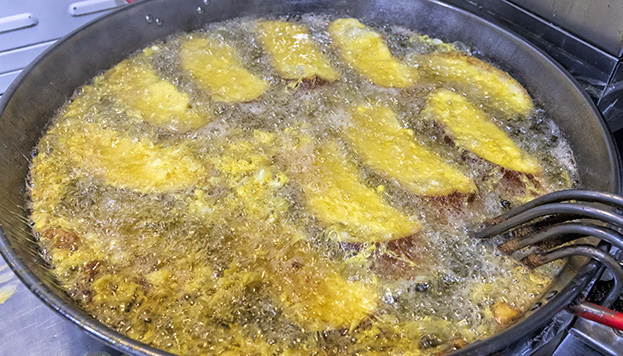 Next, dip the slices of bread into the egg and fry them in extra virgin olive oil. Once fried, coat the torrijas in the mixture of cinnamon and icing sugar. Now they’re ready to eat!