The sweetest of traditions

As the song goes, there was a time when violet sellers would appear on the streets of Madrid “like birds, precursors of spring”. Today we’re going to travel back in time through the flavours of two centuries-old sweetshops. Steeped in history, to this day they still sell their hand-made sweets with the essence of this very flower. 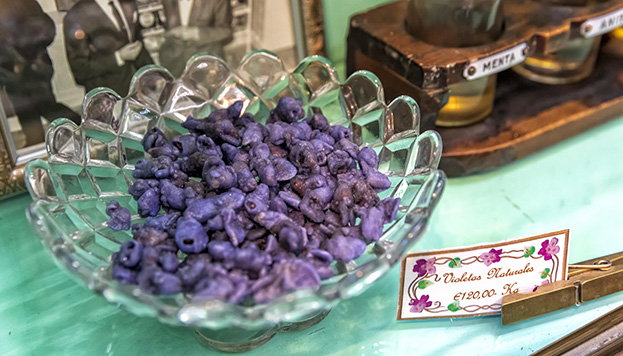 No one’s day is ruined by a sweet, and even less so by a violet one. Since the beginning of the 20th century, this is the flavour that has best represented our city, thanks to the small hard-boiled sweets that became the favourite of young and old alike. Despite also being typical of French cities like Toulouse, ours first came about as a tribute to the flower itself – once sold by violet sellers on the city’s main streets of Alcalá and Gran Vía. As the cuplé song made popular by Sara Montiel goes, the presence of these girls announced the arrival of spring. The recipe couldn’t be simpler: sugar and violet essence. Slightly tart and not what you would call overly sweet, they take many of us straight back to our childhood. However, these delicacies are not the only handmade sweets that can be found today in Madrid. There are many more, and we like them all! 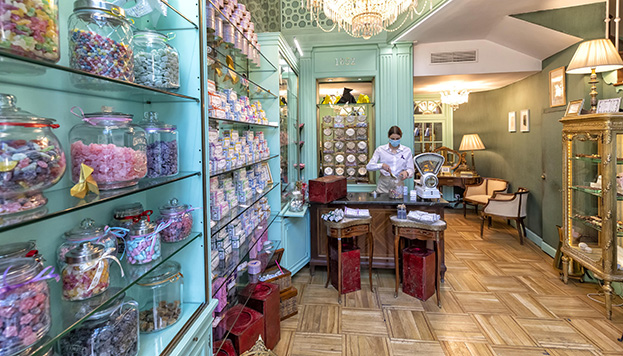 Let’s start with the flavours: anise, coffee, chocolate, coconut, raspberry, strawberry, lemon, lime, marshmallow root, mint, orange, pineapple, banana, rum, rose, vanilla, and, last but not least, violet. You’ll recognise the hard-boiled sweets sold by this century-old traditional sweetshop by their packaging. We won’t ruin the surprise, but be sure to look for the simple hieroglyphic that alludes to the confectionery store’s early days. Today the sweetshop stands in the Salamanca district, however the original store was opened in 1852 by Vicente Hijós Palacio in the oft-frequented Puerta del Sol. During its rather modest beginnings it sold confectionery and tea without a name above the door. The credit for the name it bears today goes to Miguel de Unamuno, in honour of the small paper birds (pajaritas) that he and other writers and intellectuals would make out of napkins at the literary discussions held in the city’s cafés. 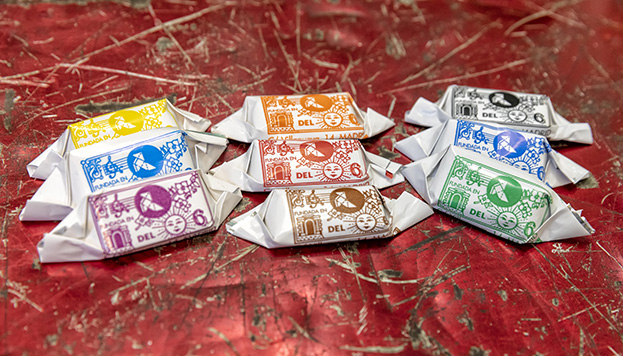 Before 1850, the hard-boiled sweets that we know today didn’t exist, and when La Pajarita first opened its doors it introduced them in a wide range of flavours. Yet it is was rose and violet sweets, crafted to almost perfectly represent the flowers themselves, that became everyone’s favourites. Back then the shop’s bakery, where they made their goods, was located on the store’s ground floor, but it wasn’t long before it outgrew the space and moved to Carrera de San Francisco, where it stayed for a hundred years. Today the bakery can be found on the outskirts of Madrid, where the very same machinery and artisan techniques are still used. 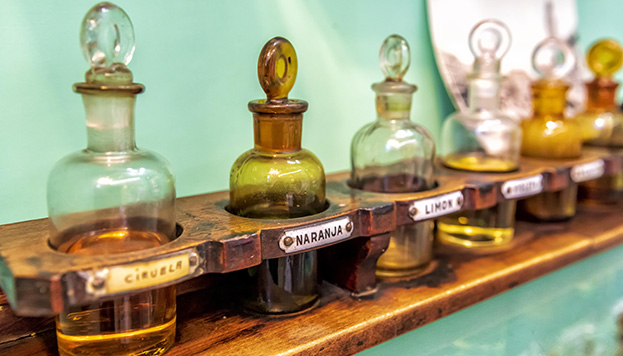 The store itself, situated in the Barrio de Salamanca, is like walking into a confectionery museum, with photographs and relics that form part of the history of Madrid’s oldest sweetshop, now managed by the sixth generation of the Aznárez family. A truly singular establishment with glass display cases, wooden counters and pastel-coloured walls, selling much more than just the hard-boiled sweets that gave their name to a polka composed by José Vicente Arche, conductor of the Teatro de la Zarzuela orchestra. Its rich catalogue also includes griseldas (white-chocolate almonds dusted with cocoa powder), French sugared almonds, seasonal candied chestnuts and, not forgetting, the famous chocolate bird figurines. 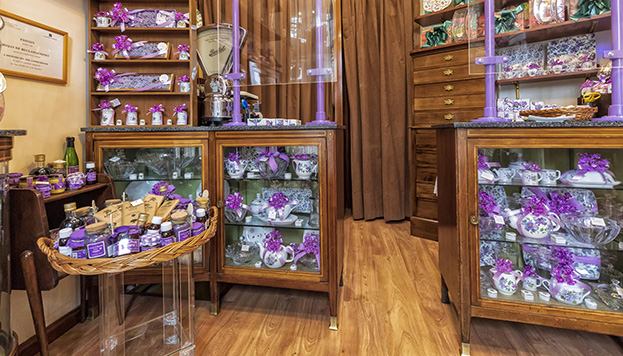 A stone’s throw away from Puerta del Sol, stands this quaint sweetshop that first opened its doors in 1915. A true symbol of Madrid, it was one of the first shops in the city to sell violet-flavoured sweets, bought by many visitors to the capital as a souvenir of their trip. 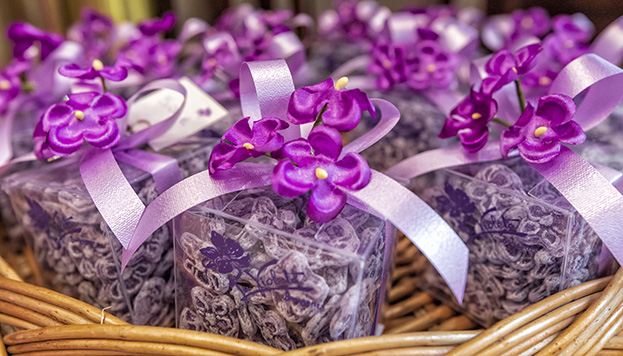 It was Mariano Gil and Pilar Temiño – the grandparents of the current owners – who founded the store, which was initially a bakery named El Postre owned by the great-grandfather of the family, who sold it to his son for the sum of 25,000 pesetas. Mariano opted to change the name of the sweetshop, which soon rose to fame and began to sell candied fruit and chestnuts, and an assortment of confectionery. Legend has it that King Alfonso XIII would come to this very sweetshop to buy gifts for both his wife, Victoria Eugenie of Battenberg, and his lover. Few know that Jacinto Benavente, winner of the Nobel Prize in Literature, was one of the shop’s most diligent customers. It would be unusual for him not to drop by for a 100-g box of violet hard-boiled sweets after his daily visit to the El Gato Negro coffee shop. 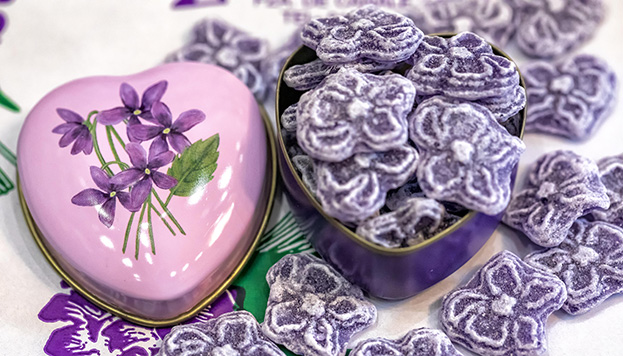 Honouring the traditional methods used to make these patented sweets is the one and only secret behind their renown. To get an idea, the shop sells up to 400 kg a week! You can choose to buy them by weight, in cans, boxes or glass jars, or in a variety of porcelain pieces, including cups, jewellery boxes, cosmetic compacts, sugar jars and chemist’s jars. A whole world of possibilities can be glimpsed from its window display and, once inside, its beautifully preserved antique interior will take you back in time. 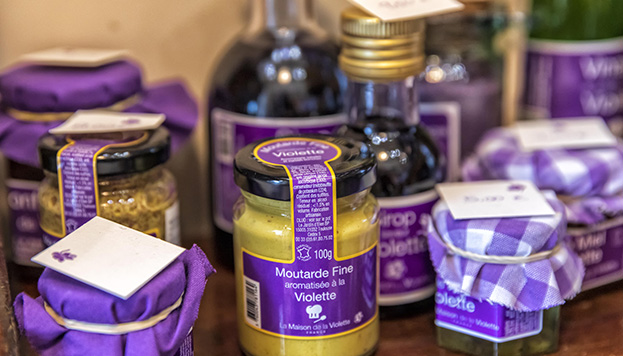 The shop’s flagship products are its candied violet flowers, made with real violet petals coated in sugar. Perfect for adding that special touch to a cocktail or herbal tea. What’s more, you can enjoy a delightful assortment of classic confectionery, from gummy raspberries and blackberries, fruit drops, hard-boiled orange and lemon slices to chocolate truffles, and gourmet delicatessen products, including violet mustard.