On the banks of the lake 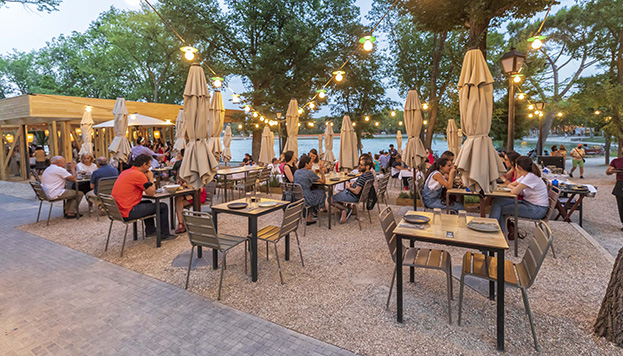 Madrid might not have a beach, but it does have a lake whose shore is a great place to enjoy the sun and breeze. These restaurants withmake up a veritable lakeside promenade in Casa de Campo Park, one of the city’s green lungs, with views of the Royal Palace and Madrid’s most iconic skyline in the background. It’s the perfect place for summer! 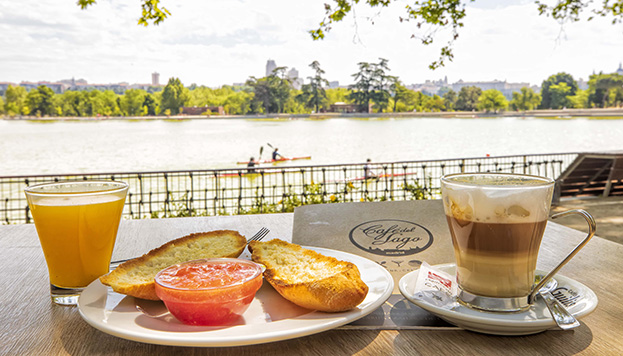 Located in the western part of the city, Casa de Campo Park is a pine and holm oak forest that covers 1,700 hectares. It was originally part of a pleasure estate owned by the Vargas family, one of the richest in Madrid in the early 16th century. Later on, it became the property of the Royal Family: the current lake is the result of joining together the original reservoirs created by Dutch engineer Pierre Jasen for the monarchs’ enjoyment back in 1560. It’s said that while he was still a prince, Philip III once organised an ice-skating session on one of them… Today, sat outside at one of the restaurants and cafés along the park’s lakefront, you can enjoy unique sunsets with the Royal Palace and La Almudena Cathedral in the background. Wondering how to get there by metro? Lago station is the closest stop. 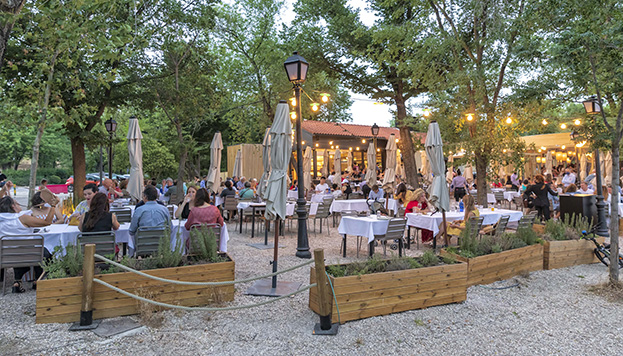 You’ll want to have a good look at the menu: offerings include roasted pepper salmorejo (a cold soup), marinated albacore and olives, seafood rossejat (baked rice), bluefin tuna tartare on toasted bread and oysters from Normandy. Located by the lake in Casa de Campo Park, Villa Verbena has become a trendy destination in Madrid, and even more so now at the height of summer. A spectacular al fresco area and a glazed dining room comprise this busy new gastronomic venture, the result of a team-up between the innovative hostel The Hat Madrid and the TriCiclo restaurant group, which has a number of establishments around the city. Almost all of the dishes are perfect for sharing. It also offers non-stop service of most of the starters and a few other dishes, like servings of potato omelette, a pairing of cured anchovies with anchovies marinated in vinegar, and patatas bravas (fried potatoes) with roasted garlic aioli. It’s the ideal place for lunch and –of course– to get a taste of Madrid’s evenings with an irresistible formula: lake breezes and dinners cooked over the charcoal grill, which is the heart and soul of Villa Verbena. Here are a few suggestions: Galician-style octopus, wild sea bass, black-bellied angler… It’s like being at the seaside, but with views of the Royal Palace. 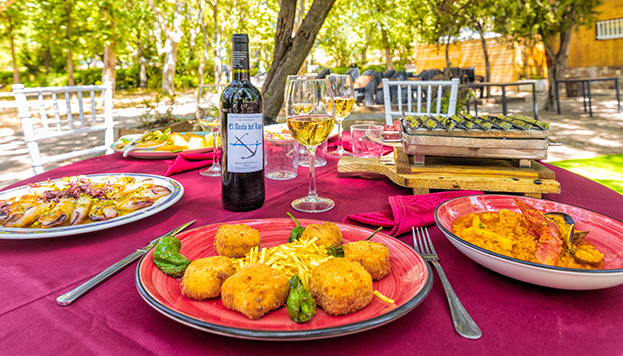 There’s a big wrought-iron anchor in Casa de Campo Park from the frigate Numancia that was gifted to the people of Madrid by the Spanish Navy in 1979. This new arrival to the lakefront pays tribute to that anchor (“ancla” in Spanish) in its name as well as on its menu, which has some dishes that always appeal when you’re by the sea, like lobster rice. The undisputed speciality, however, is meat cooked over the grill. The opening hours are so extensive you can just as easily go for breakfast as for dinner. You could go for lunch, but you could also make an afternoon of it with small platters perfect for sharing (ham croquettes, cuttlefish, etc.) or quintessential Madrid dishes like tripe, patatas bravas (fried potatoes in spicy sauce) or the classic pincho (small portion served with bread) of potato omelette. There’s a glazed dining room and an outdoor seating area next to a plane tree that’s been providing shade for over two centuries. 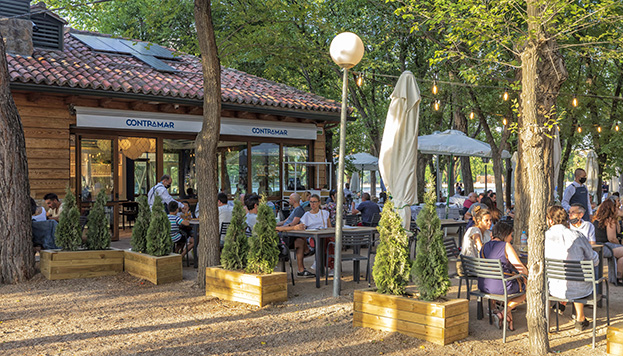 Greater amberjack, mussels in spicy paprika sauce, scarlet prawn croquettes… It’s a seafood extravaganza, and that’s just to start with, because you’ll want to leave room for the amazing rice dishes (some served in broth, like the seafood stew) and fish (wild sea bass, seasonal blue mackerel) grilled over holm oak charcoal. The menu, which has its own philosophy and is based on fresh, top-quality ingredients, is utterly tempting. In their own words: “The sea has given us unique, unmistakable flavours. We reinvent them and cook them up in our kitchen to create dishes that surprise the palate”. 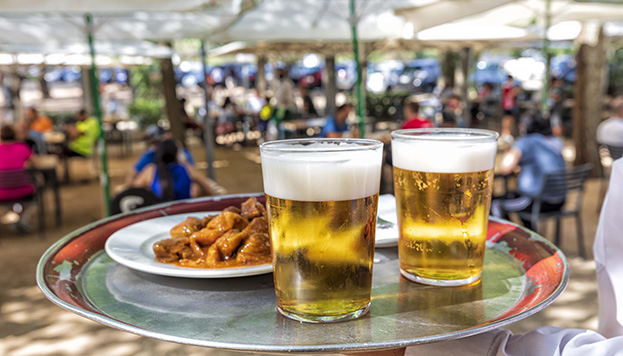 A little bit of tradition and a whole lot of nature. That’s the two-pronged approach at El Urogallo, where every dish is made with true passion. People come to share not just special moments but also dishes like patatas Urogallo(potatoes with Guernica peppers and aioli), calamari, tuna salad, red scorpion fish pâté and blood sausage fritters. They’re all exquisite and they’re part of the snack menu, although there’s also a more elaborate menu available with a focus on meat and fish dishes. For dessert, there’s cheesecake with a side of lake views. 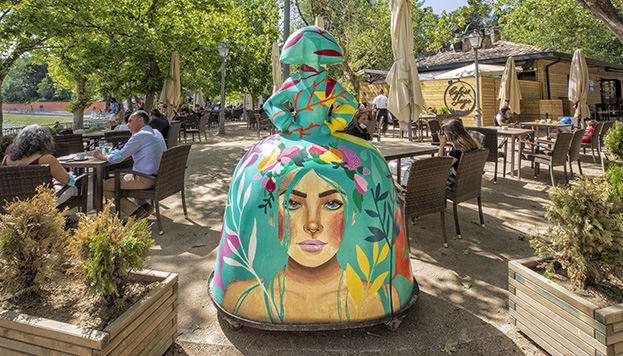 The hosts of this trendy new space say that what they offer is, in a nutshell, peace. No doubt they’re right. Nothing could be more enjoyable than starting the morning with a condensed milk coffee in the heart of Casa de Campo Park, surrounded by shades of blue and green. Any time is a great time to reserve a table. At lunch, diners can choose from, for example, ox rib steak or Provençal-style cod. For later on, there’s a selection of lighter fare complemented by an extensive cocktail list. Fancy a Sex on the Lake with watermelon liqueur? Or why not go for a Lake Paradise with orange juice and ginger? 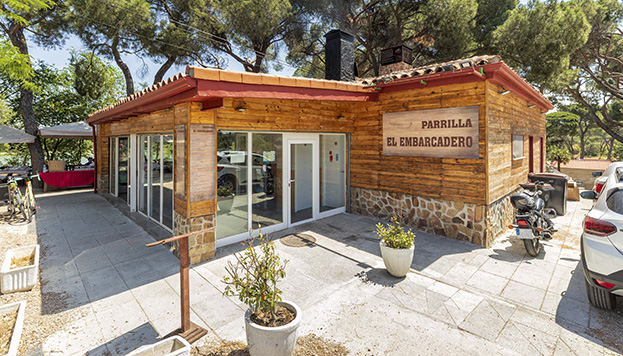 Finally, we have a classic establishment near the dock that’s so close to the water’s edge you feel like you’re on a boat. This restaurant serves Spanish-Argentine fare and has particularly outstanding charcoal-grilled meat, such as fattened steer sirloin, sliced into strips, and Galician rib steaks.