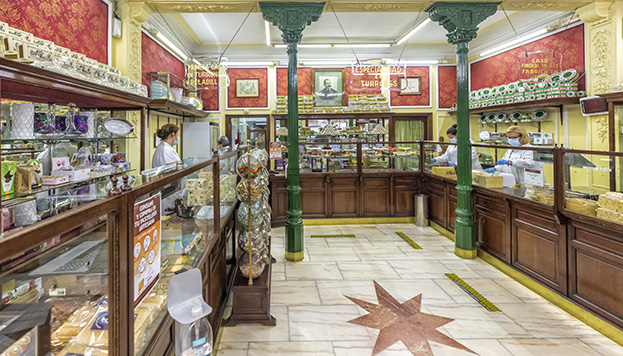 Their eating areas and display cases have seen a veritable parade of literary greats, figures from our city’s history who were captivated by their wonderful smells and tastes. Just as they did back then, these establishments with over a century of history still put a smile on our faces, especially at Christmas when they become even more magical. 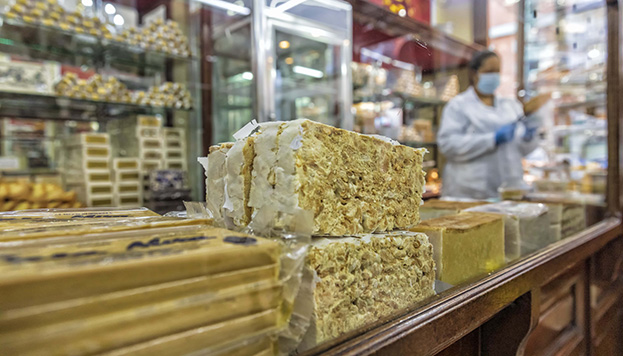 In the mid-19th century, Luis Mira decided to try his luck in Madrid. He left his hometown Jijona with a cart drawn by two donkeys laden with turrón (a nougat confection), and set out towards the big city. The story goes that he had to resume his journey up to four times, as he was peddling his goods along the way. When he finally, he started selling his delectable sweets, first from a stall in Plaza Mayor back in 1842, and then, in 1855, from the very same shop we can visit today. It’s been preserved exactly as it was, with mahogany-covered walls and mirrors that send us back in time. The house speciality is turrón, sold in bars or cut to order. Its classic -and most renowned- turrón is made from almonds (traditional hard nougat from Alicante and soft turrón from Jijona) but there are also other varieties, such as turrón made from hazelnuts, fruits or chocolate. Other Christmas specialities include soft rounds of stone-ground turrón, hand-decorated marzipan “eels”, pan de Cádiz, a marzipan and sweet potato confection, and glorias, bite-sized marzipan cakes that it makes with Marcona almonds, candied egg yolk, sweet potato, squash, meringue and cinnamon. 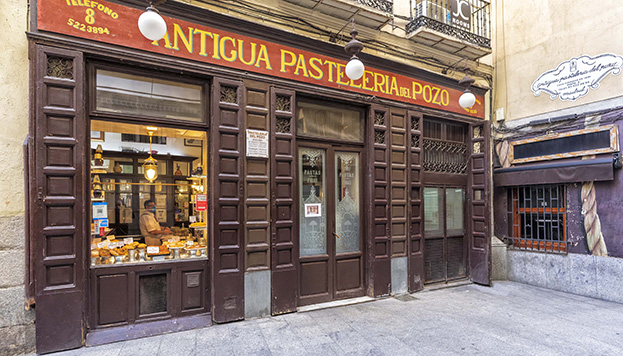 Established in 1830, Antigua Pastelería del Pozo is found in the street behind Lhardy, a restaurant which is also well over a century old. Del Pozo’s shopfront, made entirely of wood, makes it easy to recognise. Give in to the perpetual temptation of its window display and pop inside for a journey back in time. To get an idea of the sort of history it has, just look at the photo dedicated by Jacinto Benavente, winner of the 1922 Nobel Prize in Literature, to Luisa, the current owner’s grandmother. The patisserie still has the chairs where doctor and thinker Gregorio Marañón and his colleague, Carlos Jiménez Díaz, used to sit to debate whether it was better to have sweets before, during or after meals. 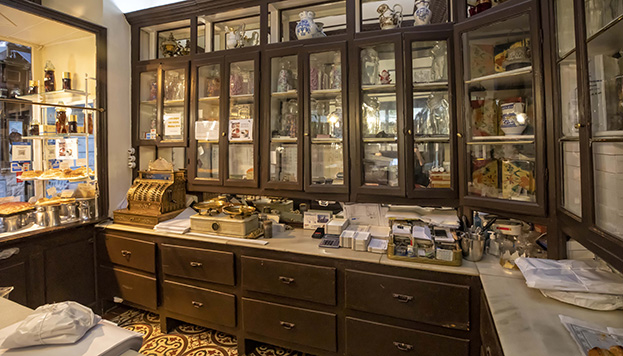 In its early days it was known as El Horno del Pozo, but it became even more famous at the beginning of the 20th century when it was acquired by confectioner Julián Leal Charle, who had previously worked in it as a shop assistant. Today, it is run by Estrella, a member of the third generation of a saga built on flour, sugar and white aprons, who continues to use the original recipes, which are simple and made with natural ingredients. Although the patisserie has undergone significant refurbishments over the years, it still has some of the original furnishings, including a wood and marble counter, a cash register made in Cuba in the mid-19th century which still works, a lamp that originally ran on gas, and a classic double-pan balance. 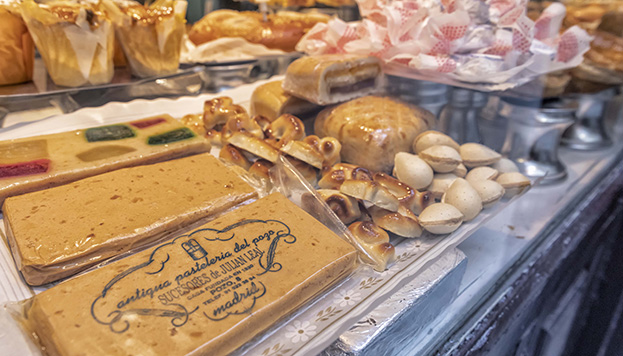 So, what does it sell? The answer is simple: pastries (the most famous in Madrid, made with melted Ibérico pork lard) and traditional sweets including roscones de Reyes (Epiphany ring cakes) made without candied fruit or filling. You’ll face long queues if you want to get one on 6 January. In just a few days, they make over four thousand of them! This Christmas, be sure to try the other artisanal confections made with love over many, many long hours spent in the bakery: maybe one of the turrones –the orange turrón and the stone-ground variety, similar to soft turrón, are outstanding– or perhaps the mantecados and polvorones, two types of almond shortbread cookies. 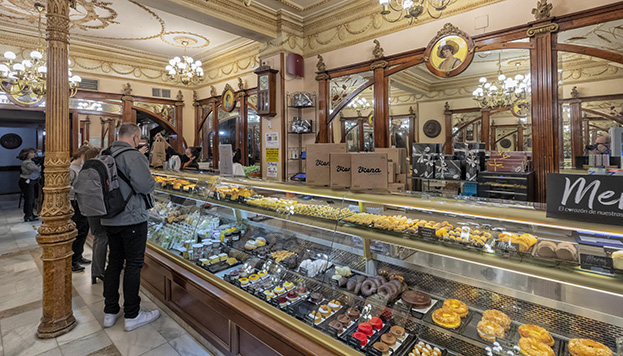 In 1873, the Patent Office awarded Matías Lacasa the exclusive rights, for ten years, to make Vienna bread in Madrid. This bread has a finer texture than the durum wheat bread that was commonly consumed. It was then that he and his wife, Juana, opened a bakery in what is now Calle de la Misericordia, where the residence of the Royal Family’s priests used to be located. After they both passed away, their nephews, writer Pío Baroja and his brother Ricardo, who was a painter and etcher, took over the business. A young apprentice named Manuel Lence acquired it later on and today it is run by his descendants. It has branches all over Madrid, although this one in Goya has been preserved almost exactly as it was when it first opened. The goodies in its Christmas hampers, which make a perfect gift, include turrónes, alfajores (almond, honey and nut confections) and artisanal panettoni. 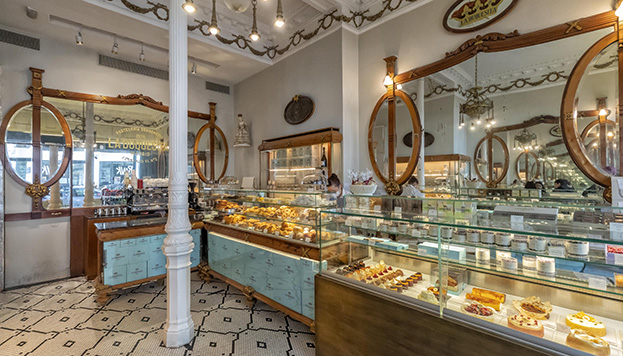 “Getting people excited over our sweet gastronomy” is the goal of pastry chef Oriol Balaguer, who has run this century-old patisserie since 2015. Its history goes back to 1914, although it’s since the 1930s, with the Santamaría family at the helm, that it has emerged as one of Madrid’s top patisseries. As if time had stood still, the delicate pastry shop is still presided over by the alabaster duchess it’s named after. The original shop sign reading “Bonbons and fine sweets”, counters, display cases, mirrors and large central lamp are also still there. Later on, when it changed hanbds, a white floor with black geometric motifs and a bar and tables made of marble were added. Everything here is exquisite. Don’t miss the turrones, chocolate fir trees and panettone made from fruit, chocolate or gianduja and chestnut. 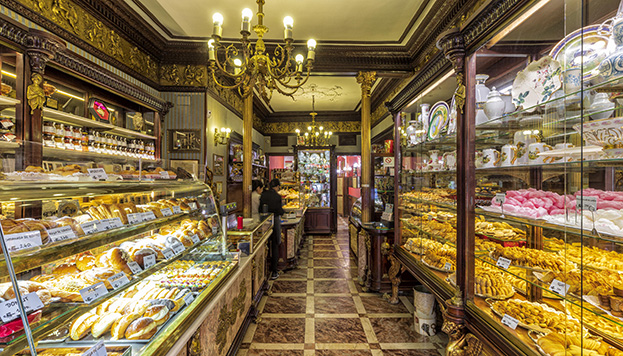 This artisanal confectionery was founded in 1855 by Dámaso Maza, a pastry chef from La Rioja employed by Queen Maria Christina of the Two Sicilies. Upon stepping inside, be sure to take a good look at the plasterwork on the ceiling, the lamps, the Isabelline light fixtures on the wall and, especially, the magnificent counters and display cases built by palace cabinetmakers out of mahogany imported from Cuba. It also still has the original wood-burning oven, cash register and old scales. The catalogue of Christmas treats includes a bit of everything: from roscones and artisanal turrones to “eels” and marzipan figures, candied fruit and almond shortbread, not to mention the bocaidentes: egg yolk confections with icing sugar. 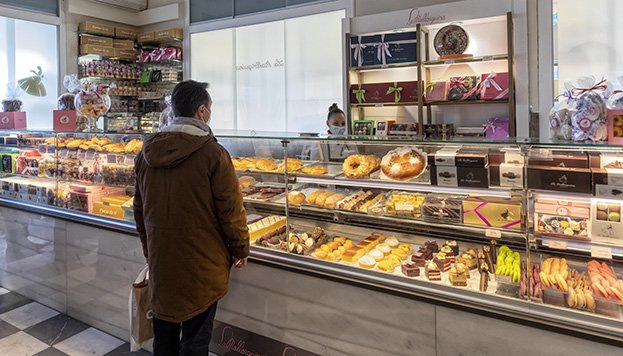 This establishment whose delicious smells waft through Puerta del Sol was founded by three Majorcans in 1894. It was originally located in Calle Jacometrezo, but they later acquired this shop where everyone from Madrid has been at least once. Ensaimadas (coil-shaped pastries) were the first sweets to find favour with their customers, who came to participate in discussions while they drank hot chocolate or coffee accompanied by ice cream served on shell-shaped glass plates by tuxedo-clad waiters who spoke in French. Although its most popular product is the napolitana, at this time of year you’ll want to buy its Christmas logs, marzipan figures and roscones.