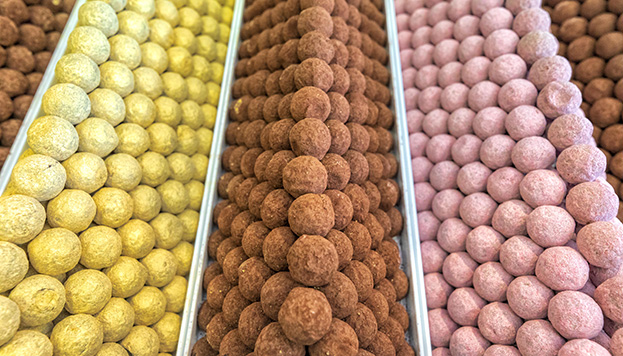 No one can resist a sweet treat, and even less one made from cocoa. Dotted around the city are plenty of artisan chocolate shops and patisseries that use only the finest ingredients. Read on to discover master chocolatiers whose creations are pure indulgence guaranteed to send your taste buds into overdrive. 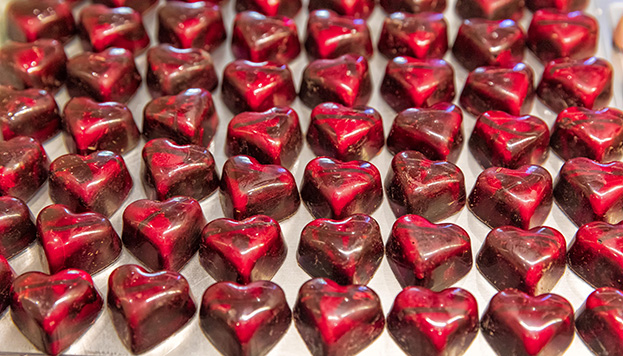 Valle-Inclán called chocolate the “bread of the gods”. And he must have had his share of hot chocolate during the literary discussions that were frequently held in Madrid’s cafés in his era, for the popular cocoa-based drink was often served at such gatherings. Brought to Spain from the Americas, at first it was only drunk by high society, including the Royal Family, who were responsible for its spread to the rest of Europe. Mixed with sugar -not with chile peppers, as the Mayans and Aztecs did- it produced large doses of happiness, despite some claiming it brought on nostalgia. During the 19th century, its consumption became widespread and factories appeared which also produced it in bar form. The most notable in Madrid were La Colonial – which is still in business -, Matías López, with its famous fat and skinny ad, and El Indio, located in Calle de la Luna, which had its own mill. Today’s chocolate shops and patisseries are home to master creators who use chocolate as their medium. It’s truly an art form. 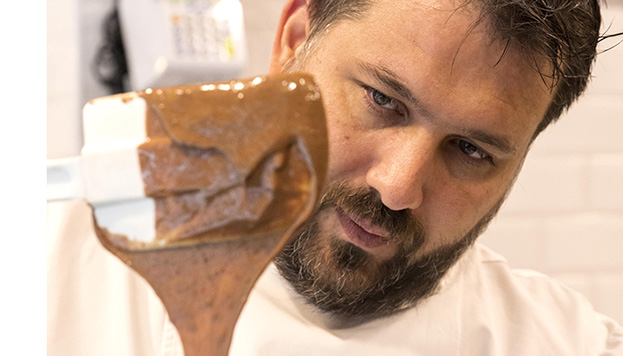 Ricardo Vélez was twenty years old when he started working at Lardhy. Today, with a Best Pastry Chef Award from the International Academy of Gastronomy under his belt and three of his own establishments in the city, the man known as the “Cocoa Chef” is getting back in touch with his roots. Recently appointed head dessert chef at the century-old restaurant, a place for which he feels “special affection”, Vélez has a deep bond with our city, as does his confectioner’s Moulin Chocolat. Located next to El Retiro Park, the establishment is celebrating its 15th anniversary this year. 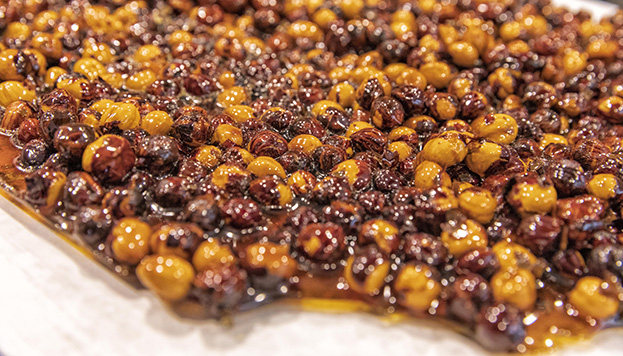 The window display is sheer temptation; it’s full of delectable treats that reflect Ricardo’s French influence and his love for chocolate. Although it’s his macarons and roscones that have become famous, there are all sorts of other goodies that you shouldn’t miss, such as the popular palmiers and truffles. And it’s precisely these irresistible little balls of sweetness that he and his associate David Durán are making when they receive us in the patisserie. Ricardo explains that everything here is one hundred percent artisanal, and that all of his bakery goods and confectionery are made with the very best ingredients. The truffle filling, for example, is a praline made on site “the old-fashioned way, so that in our mouths we feel little bits of the nuts” that are used to make it (hazelnuts, for instance), along with “Circa sugar, the most natural in the world. It comes from Panama and is grown on the side of a volcano”. 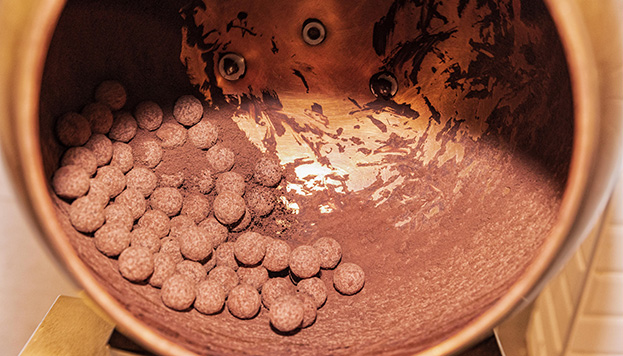 While David finishes up the truffle-making process with something that looks like a tiny cement mixer that allows them to “hand-coat up to 500 truffles in cocoa in 40 seconds”, Ricardo tells us some more of his secrets. Moulin Chocolat mainly uses Valrhona 70% Guanaja chocolate, an intense, elegant blend of creole cocoas from the Americas. For its Happy Manjari cookies, however, it uses Manjari chocolate, which is found exclusively in Madagascar, and has a hint of salt. As their name suggests, whether you eat just one or several, they’ll brighten up your day! 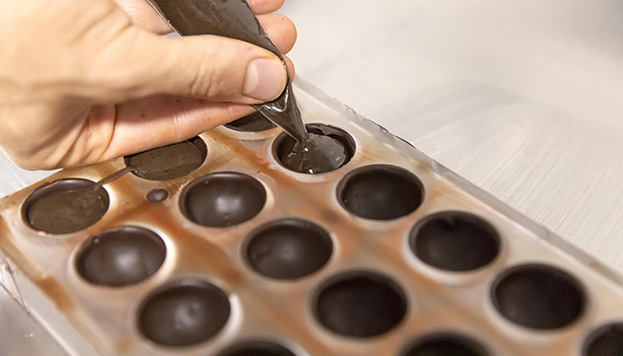 In just three years, Carmen Capote from the island of La Palma has turned a small, signature confectioner’s in Barrio de Salamanca into an essential destination for those with a sweet tooth. When she was little, Carmen’s father would always bring her a chocolate bar when he picked her up from school, but one day she ate so much that she never wanted to try the stuff again. That changed, however, when she went to study at Le Cordon Bleu in Paris… This establishment and the one she recently opened in Calle de Zurbano (no. 54) are “a dream come true” for her. 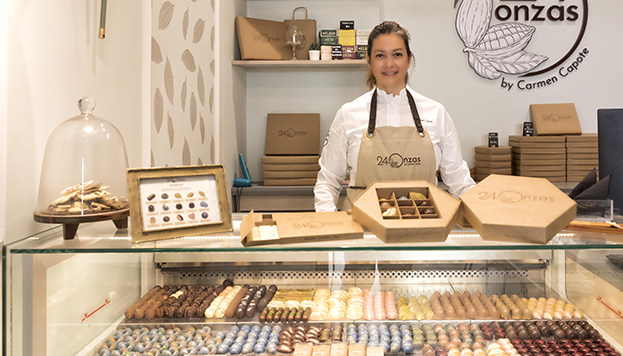 So, what can we buy to take home with us? “Delicate, creative designs that aim to make memories that will accompany us in special moments; delicious morsels with different, inspiring ingredients that invite you to return”, says Carmen. Her marvellous selection comprises bonbons in a range of colours and flavours, creative bars with surprising toppings, truffles and orangettes, segments of candied orange coated in different chocolates. All of her creations are made by hand daily on site and we strongly recommend taking her message to heart: “Chocolate is magic, it’s happiness!” 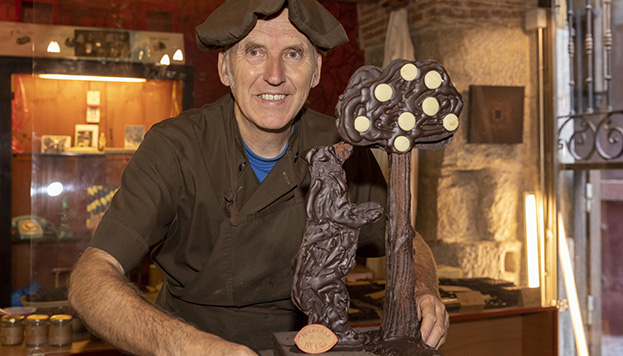 You’re unlikely to find a master chocolatier as jovial and charismatic as Paul-Hector Bossier anywhere else in Madrid. He was born in Ghent, and although he’s a big fan of Spain, it goes without saying that in his chocolate shop, he uses Belgian chocolate in all of his creations. Located in the heart of Hapsburg Madrid, his establishment and his goodies have legions of fans in the neighbourhood as well as further afield. 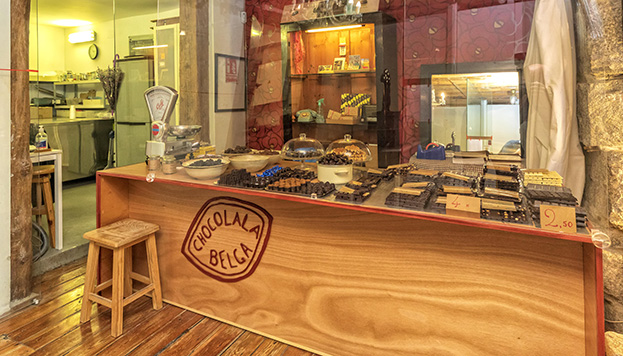 In the shop, you’ll just as easily come across chocolate figures of Tintin and Snowy as you might a Bear and Strawberry Tree, epitomising the cultural fusion that he proudly exhibits. Truffles are his speciality, and he makes them with an extremely varied range of fillings (from coffee to orange and coconut) and coatings. At this time of year, you can’t go wrong ordering a hot chocolate to take away, although there will be those who prefer his bonbons (white or black chocolate, filled with hazelnut, with orange and even sun-dried tomato) or his Liège waffles. His work is truly artisanal, and his displays a feast for the eyes.