Tradition on the table 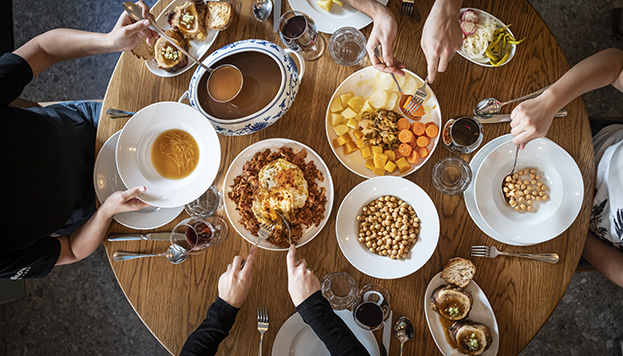 It’s midwinter, and there’s nothing we feel like more than a hearty bowl of stew. Luckily for us, we’re in Madrid. And if there’s a dish that represents the capital it’s cocido. This delicious meat and chickpea stew will be the star of a culinary itinerary which, from 15 February to 31 March, will bring this dish to the tables of many of the city’s restaurants. What better incentive to delve into its origins. 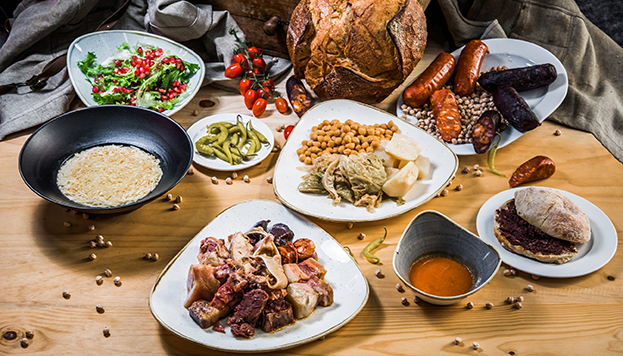 “Don’t speak to me of banquets in Rome, or the menu at the Plaza Hotel in New York; don’t mention pheasant or pigeon foie gras, or lobster thermidor.” These are the opening lines to the famous copla by the trio Quintero, León and Quiroga, whose chorus was brought fame to by the likes of Pepe Blanco and Manolo Escobar: “Cocidito Madrileño, chiming in the attic, the aroma of mint and sundown festivities at Las Vistillas Gardens.” There’s no denying it; there’s not a dish in Madrid as traditional as that of cocido. We don’t need convincing; although some of the capital’s other specialty dishes, from tripe to sea bream, would certainly put up a fight for the same title. 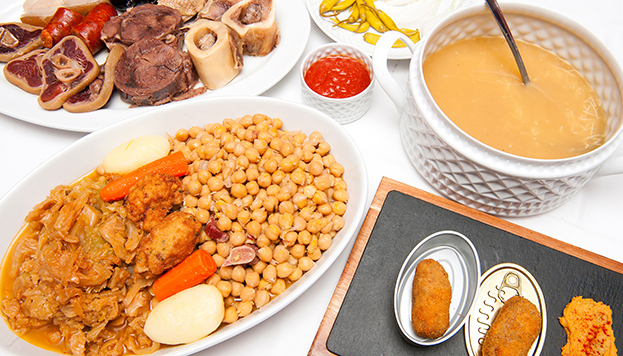 As we bid farewell to January, we give ourselves over to its aroma and flavour and embark on the long-standing CocidoRoute, from 15 February to 31 March, to savour this heart-warming dish on the tables of many of the city’s restaurants. This itinerary for gourmet foodies features the option to vote for your favourite cocido to be in with the chance of winning a culinary prize. But there’s a little more to it than simply satisfying the appetite. Before we pull up a chair, let’s take a brief glimpse at the history of this classic dish. 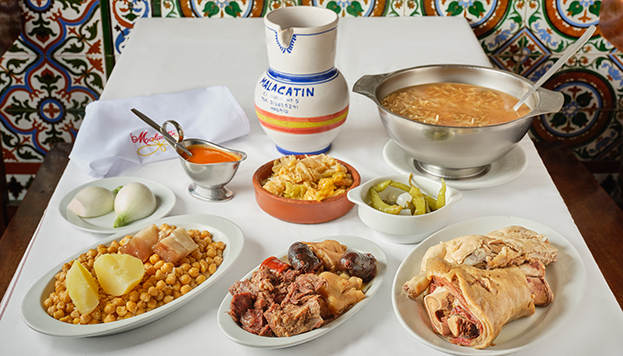 This emblem of gastronomy in the capital is the result of the coming together of two medieval dishes: olla podrida– literally “rotten pot” – cropping up time and time again in Spanish Golden Age literature, and adafina, a Jewish stew prepared and set to simmer slowly in a clay pot on Friday nights ready for the Sabbath, ensuring no cooking would be required on the day of rest.  The main ingredient of cocido is the humble chickpea, introduced into the Iberian Peninsula by the Carthaginians. Not forgetting the other ingredients: vegetables, meat, pork fatback, and a variety of cured meats. Its beginnings were modest. It was initially eaten by the lower classes yet, slowly but surely, cocido won over the higher classes and the Spanish Court with its charm, and went on to be served not only in traditional tabernas, but also in high-class restaurants. It was at the turn of the 20th century when it came to be known as a quintessential dish of the capital, despite sharing origins with cocido montañés, typically eaten in the Cantabrian mountains, and cocido maragato from the ancient region of Maragatería. 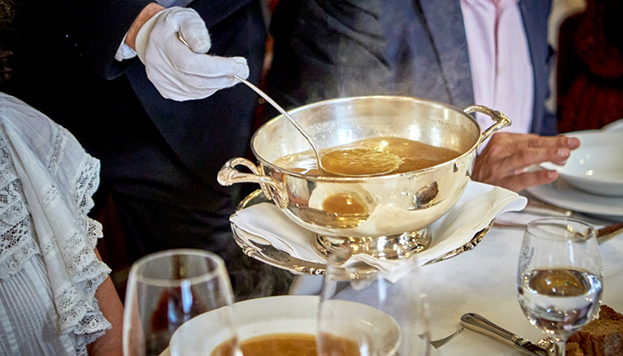 In Madrid, cocido is commonly served in three vuelcos; these turns, or consecutive courses, take their name from the action of pouring or tipping the stew from the casserole pot into serving dishes. The order is always the same: first the soup is served with fine noodles, next come the chickpeas, potatoes and vegetables and, last but not least, the meat, typically fresh pork, stewing hen and beef. The third ‘turn’ is the perfect opportunity to help yourself to seconds and even thirds of any remaining ingredients. And if any leftovers survive the final turn, they’re generally fried up as breaded croquetas. 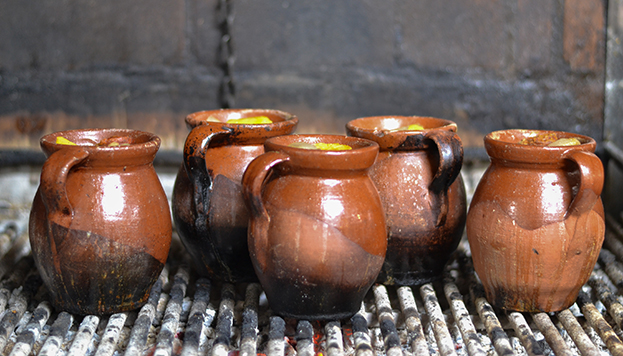 The most renowned cocidos of the capital can be found at Lhardy (No. 8, Carrera de San Jerónimo), where the dish is served on a silver tray; at Malacatín (No. 5, Calle de la Ruda), prepared following the very same recipe as in 1895, and at La Bola (No. 5, Calle de la Bola), cooked slowly over oak wood charcoal pieces in individual clay casserole dishes. The newspapers of the time tell us that cocido was first served at varying time slots throughout the day: at midday for labourers and employees of local businesses, costing 1.15 pesetas; at one in the afternoon, prepared using stewing hen (the students’ favourite), costing 1.25 pesetas; and at two o’clock onwards, replete with chunks of meat and pork fatback, as preferred by the bourgeoisie, journalists and politicians.  The story goes that Princess Isabella (known as La Chata due to her button nose), daughter of Queen Isabella II of Spain, was the harbinger of take away food in the capital. To avoid socialising with the masses, she would enjoy her cocido,recently prepared in the kitchen of La Bola, in the Royal Palace. 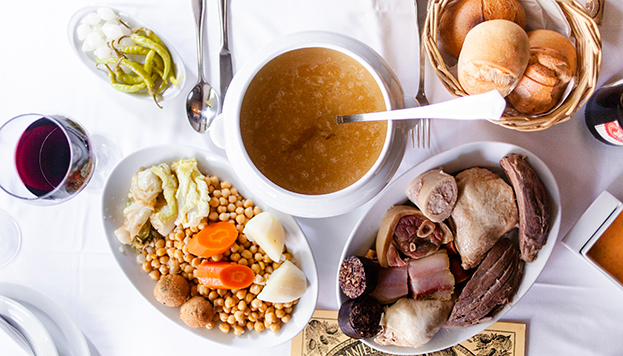 Other celebrated restaurants serving this renowned dish are Cruz Blanca de Vallecas (No. 58, Calle de Carlos Martín Álvarez), whose cocido has been named on various occasions as the best in Madrid; the traditional taberna La Daniela (No. 7, Plaza de Jesús), where the three ‘turns’ are referred to as the sota (Jack), caballo (horse) and rey (king); Casa Carola (No. 54, Calle de Padilla), serving cocido using chickpeas grown in the town of Cabañas de Polendo in Segovia; Casa Maravillas (No. 54, Calle de Jorge Juan), whose recipe includes pumpkin, lending the vegetables of the dish a touch of sweetness, and Iberian ham from Guijuelo; and, finally, Casa Mories (No 5, Plaza de San Miguel), where a cocido Taster Menu is served on the last Thursday of every month, starting with a warm vegetable salad and ending with cheese cake for dessert. 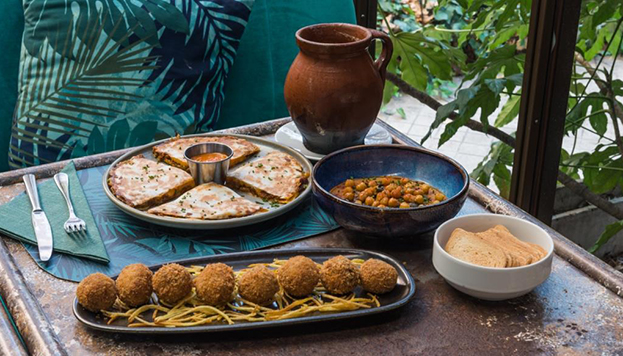 On Wednesdays at Ponzano (No. 12, Calle de Ponzano), you’ll find cocido in five ‘turns’, served with pan de cristal (a light, crispy bread with a glass-like texture) smeared with pringá (leftover shredded cooked meats) and a light side dish of endive and pomegranate salad. At La Clave (No. 22, Calle de Velázquez) there are four ‘turns’, where the first consists of pringá croquettes made from the leftover smoked ham, chorizo and blood sausage. Don’t miss modern eateries where meeting friends for cocido is the thing to do. There’s La Casa de Cristal (No. 1, Calle de Pedro Muguruza) whose menu, in addition to cocido, includes quesadillas stuffed with ropa vieja (leftover stewed meat) and hummous made from pumpkin and chickpeas taken straight from the casserole dish, and Media Ración (No. 15, Calle de la Beneficencia), where cocido is served with piparra chilli peppers and a secret ingredient – which, according to chef Antonio del Amo, has something to do with “the cocido my mother would make when I was a child.” At La Cocina de Frente (No. 40, Calle de Ibiza) an eatery serving homemade traditional dishes with a modern twist, Juanjo López makes a tasty cocido (which must be ordered at least 48 hours in advance), which includes ropa vieja with a fried egg and veal marrow with celery tartar. 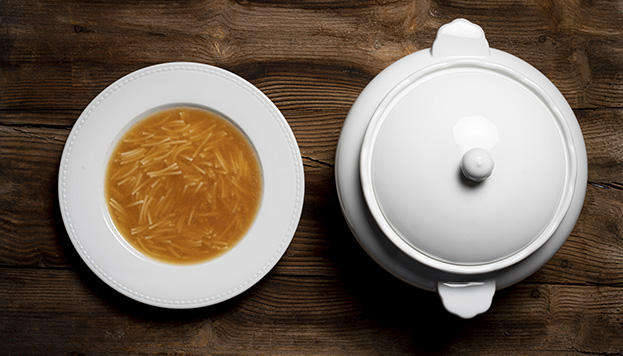 And there are still two to go: the Cocido Madrí served in three ‘turns’ and carefully prepared and sent straight to your door by Grupo Arzábal (cocidomadrid.com/a-domicilio/) and that at Hotel Índigo Madrid Gran Vía (No. 6, Calle de Silva). Until 1 March, the hotel will be running Cocido and Siesta Sundays, which does exactly what it says on the tin. Book lunch and an afternoon nap in one of its rooms, reserved for guests for three hours.