All the flavours of the Literary Quarter 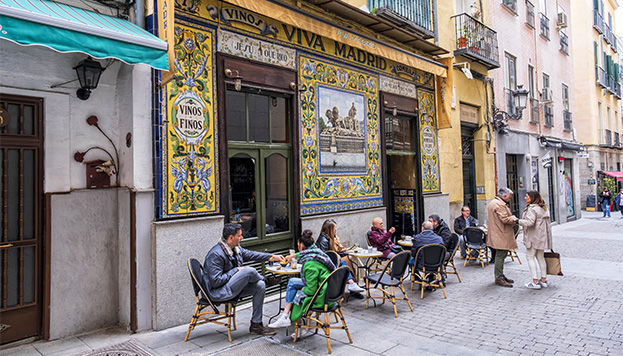 In the most literary month in Madrid’s calendar, we’ll explore all of the streets and squares that were once a haven for the great writers of the Spanish Golden Age. Many of their taverns and restaurants hearken back to years gone by. Others have embraced modern times but remind us that here and now, like back then, exciting things are always happening. That applies to the kitchen too. 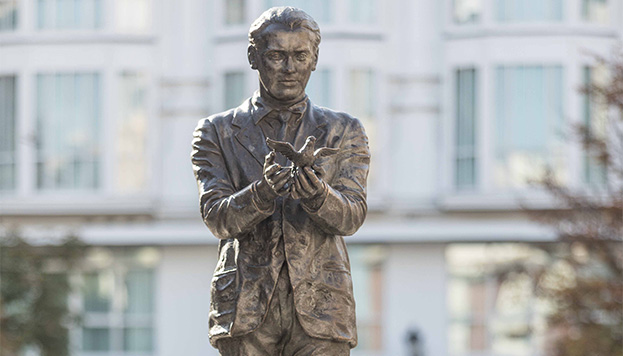 If Calderón de la Barca and Federico García Lorca were as immortal as their works, they’d come down from their pedestals in Plaza de Santa Ana to chat—what would they talk about?—and have something to eat or drink at one of its lively outdoor cafés. We’re in the heart of Barrio de las Letras (Literary Quarter). It’s dominated by Teatro Español, an opera house on the former site of Corral del Príncipe, one of six open-air theatres that Madrid had at one point during the Spanish Golden Age. It was precisely during this period that the area we’re visiting today, always buzzing and vibrant, was a favourite haunt of illustrious writers like “The Phoenix of Wits” (Lope de Vega), Góngora, Quevedo and Miguel de Cervantes, who described the orchards of Paseo del Prado that marked the boundaries of this large residential area as fountains that “flowed with nectar” and “rained ambrosia”. With these words to inspire us, we’ll explore all of the taverns, bars and restaurants that must have delighted those earliest residents who didn’t know it but would end up giving a name to this set of picturesque streets and little squares in the heart of the city. 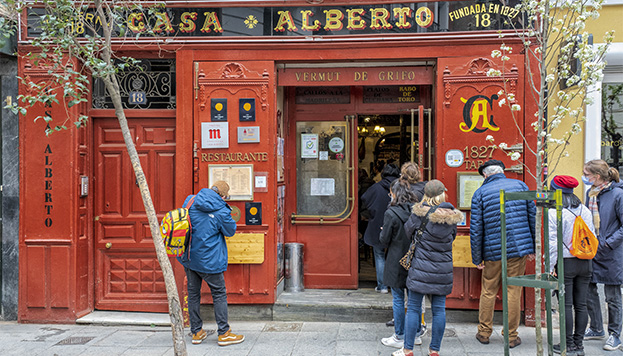 To soak up the area’s literary spirit, the first thing we should do is visit Lope de Vega House Museum, where the writer lived for the last 25 years of his life. It’s in Calle de Cervantes, a street named after his arch-rival, whose life we can also trace in the area. No. 87 Calle de Atocha was once the location of Juan Cuesta printing house, where the first edition of Don Quixote was printed in 1605. At no. 18 Calle de las Huertas, a building now stands on the site of another where he wrote the second part of his great masterpiece. We’ll make a stop here. Back then, the building’s ground floor didn’t house Casa Alberto, even though it’s one of the city’s oldest restaurants. It opened in 1827 as a simple tavern that served wine accompanied by hard-boiled eggs or dried cod. Its red facade is typical of Madrid’s taverns, and its bar is the only one in Madrid made of onyx. Other very old features include the soda carbonator, the cash register and the five-tap tower out of which beer and vermouth flowed. House specialities include escargots, Madrid-style tripe and oxtail. 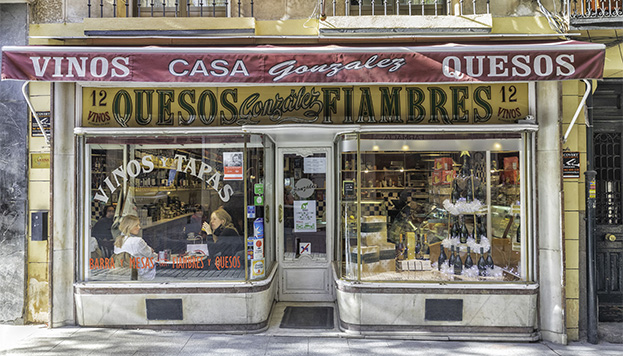 The oldest shop still trading in the neighbourhood is Casa González (no. 12 León), established in 1931 as a grocery. It soon became a favourite with Madrid’s middle classes, who were frequent consumers of its preserved foods, wines, cheeses and Ibérico pork cold meats and sausages, which since the 1990s can also be enjoyed on site. The same philosophy is shared by Alimentación Quiroga (no. 19 Huertas), a shop that opened in 1958 and has been transformed into a very 21st century food shop where you can just as easily do your shopping (ham, cheese, etc.) as you can enjoy some toasted bread topped with foie gras and drizzled with black truffle honey. Another famous establishment in the area is almost a century old and holds true to its principles: La Venencia (no. 7 Echegaray), a wine bar anchored in the past that only serves fino and manzanilla sherries, accompanied by tapas of mojama (salt-cured tuna), anchovies, olives and pickles. 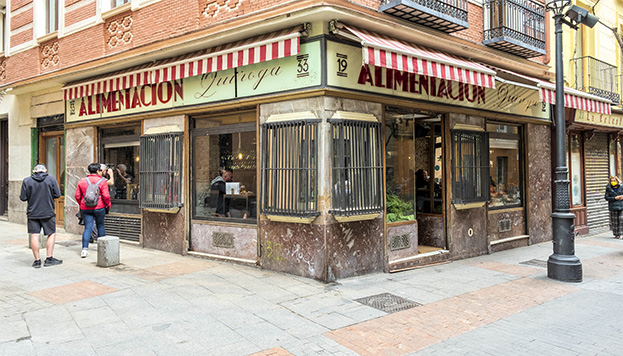 Some restaurants continue to serve cuisine that’s utterly classic, though not necessarily from Madrid, perhaps because the appearance of the neighbourhood, also known as that of the “Thespians” and that of the “Muses”, seems to require it. Examples include La Huerta de Tudela (no. 15 Prado), where vegetables from Navarre play a starring role on the menu, and El Caldero, a little slice of Murcia in Madrid that makes some of the world’s best arroz caldoso (literally, “soupy rice”). Some restaurants that offer more traditional Madrid fare are La Daniela (no. 7 Plaza de Jesús), where they’re experts on cocido (chickpea stew), Casa Mortero (no. 9 Zorrilla), with its creamy croquettes, and Castizo (no. 9 Plaza del Ángel), a “neo-tavern” whose mirrors remind us: “Madriz, home of everyone and city of no one”. 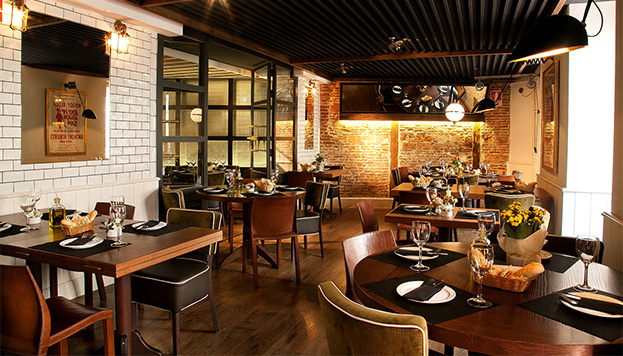 One of the major cultural institutions in the neighbourhood is Ateneo de Madrid (no. 21 Prado), which had an important role in Spanish social life in the 19th and early 20th centuries as a forum for discussions and a platform for free expression of ideas. The room known as the cacharrería (china shop) bore witness to the lively social gatherings where writers and artists used to hold discussions well into the night. It hosted the likes of Mariano José de Larra, Miguel de Unamuno, Valle-Inclán, Galdós and Federico García Lorca, who would be surprised by the new atmosphere of its café, now called La Cantina del Ateneo (no. 10 Santa Catalina), where you can have a coffee, yes, but you can also enjoy Mediterranean dishes. 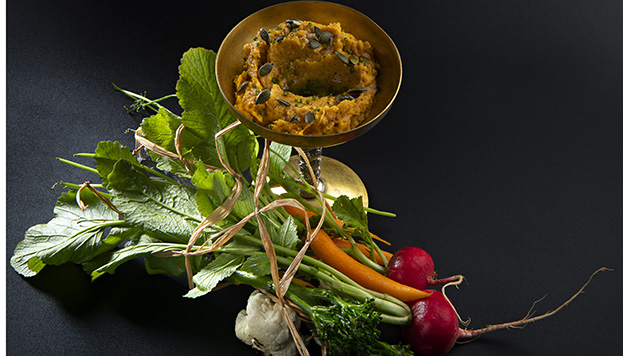 One illustrious member of the Ateneo was José de Echagaray, who won the Nobel Prize for Literature in 1904. He lent his name to one of the main streets in Barrio de Las Letras, and it’s home to some must-visit establishments including Casa Lobo (no. 8 Echegaray), a contemporary version of Madrid’s old eating houses that operates under the culinary supervision of chef Fernando P. Arellano. Of all its tasty offerings, our top picks are the soldaditos de pavía (cod fritters) and cochifrito, fried suckling pigs’ ears marinated in honey and spicy chorizo. At no. 21, Salmon Guru awaits. It ranks 24th on the list of the World’s 50 Best Bars. It’s not a restaurant, but a bar where Diego Cabrera unleashes his imagination to create fabulous cocktails like the ones in his Locuras (Madness) series. It also serves very original food. Fancy some Brazilian cheese bread? 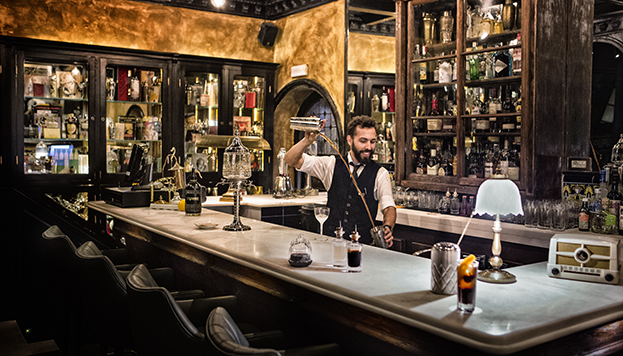 Diego Cabrera is also behind Viva Madrid (no. 7 Manuel Fernández y González), an unusual pub in a space that formerly housed a tavern established in 1856. It still has the striking ceramic tiles, coffered ceiling and tin bar from that era. The cocktails are spectacular, but so are the raciones (“servings”, typically shared): stewed red pancetta, confit potatoes with black brava (spicy paprika) sauce, and tuna and potato salad with Kalamata olive paste are some examples. Another pub that has been given a new life is La Elisa (no. 42 Santa María), whose tiles and wooden bar remind us that it opened in 1907. Its menu favours traditional fare, with some innovative tweaks that act as a counterpoint. Two examples: spicy stuffed breaded mussels and vinegar-marinated anchovies with fresh-cut chips. 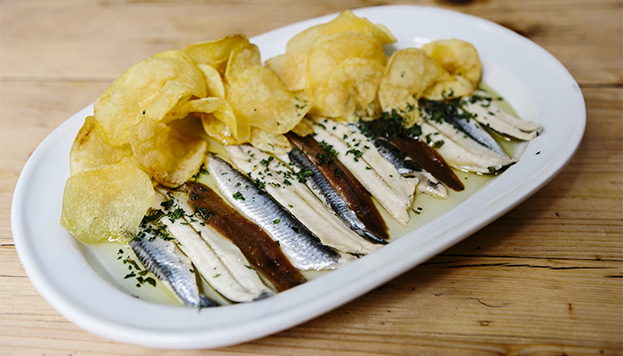 La Elisa restaurant group also owns other restaurants in the neighbourhood: Sua (no. 22 Moratín), where charcoal is the star of the menu, the trattoria Tandem (no. 39 Santa María) and Triciclo (no. 28 Santa María), which takes us on a culinary journey to different parts of the world. It’s a place to enjoy fresh ingredients which lets their natural flavours shine through, making almost no changes. The same philosophy is shared by Estimar (no. 18 Marqués de Cubas), a seafood restaurant. 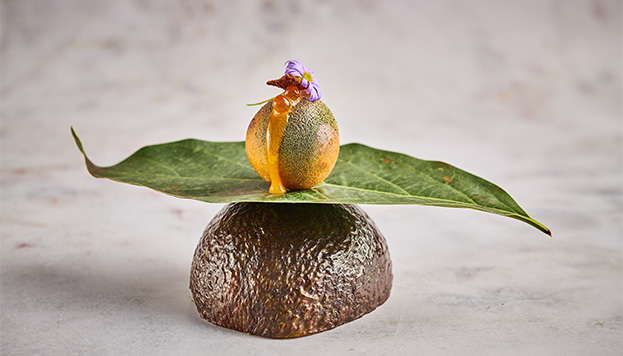 The neighbourhood’s history is steeped in literature and the humanities, but there’s room for a number or two. Or 3, which is how many of its restaurants boast a Michelin star: Cebo (no. 34 Carrera de San Jerónimo), helmed by Aurelio Morales; Gofio (no. 9 Lope de Vega), where Safe Cruz serves creative Canary Island fare, and Yugo The Bunker (no. 4 San Blas) by chef Julián Mármol, who has a passion for Japanese haute cuisine. The restaurant has two areas: a traditional Izakaya bar on the upper level and a perfect recreation of a World War II Japanese bunker downstairs. If there’s one thing that’s clear, it’s that there’s an enormous variety of culinary offerings to be found in Barrio de las Letras. That same diversity also distinguishes its residents. One of them, Valle-Inclán, springs to mind when one looks in the concave and convex mirrors in Callejón del Gato, now in Bar Las Bravas (no. 3 Álvarez Gato), which deform the observer just as the author described in Bohemian Lights.