Gourmet shops: no two are the same 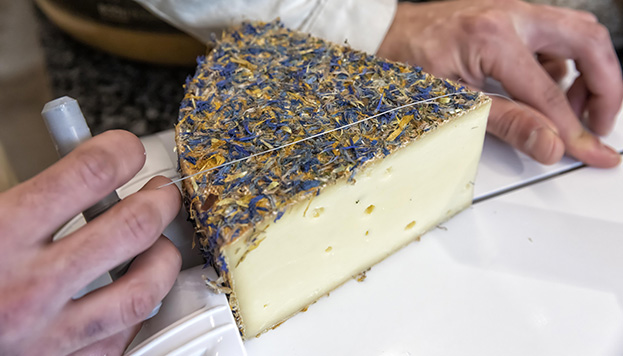 Ultra-specialisation is here to stay. This month, as Madrid hosts Gastrofestival, its most important culinary event, we’ll be taking a look at some of the shops in the city devoted to a single product. There’s an endless range of flavours and aromas! 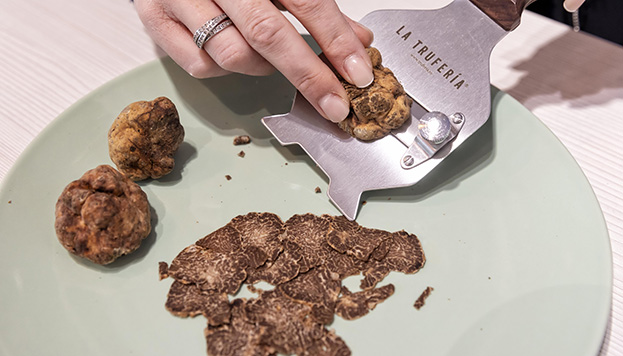 Tell me what you buy and I’ll tell you who you are. Or rather, tell me what you buy and I’ll tell you what era you’re living in. There was a time in Madrid in particular, and the world in general, that shops only supplied their customers with essential goods. Back in the 19th century there were no window displays, so people would walk in without hesitation and ask for what they needed at the counter. Goods didn’t catch your eye, although in the famous ultramarinos, or corner groceries, which began to crop up in the city, they certainly did catch your nose! They sold a bit of everything, and the smell of coffee would blend together with that of cod or spices, for example. They had preserved foods, cold meats, pulses… and, above all, friendly service. That warm rapport was part of everyday neighbourhood life, and the vocational spirit of those who sold goods is still alive in many establishments, shops which are, interestingly, the antithesis of those old ultramarinos. The shops we’ll be visiting today all specialise in a single product. But their philosophy remains the same: the goods they sell are high-quality and exclusive. 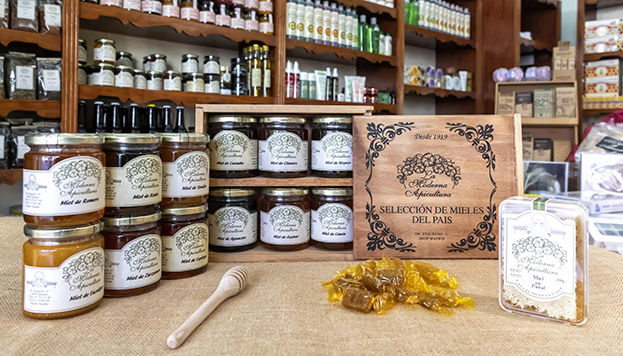 Although its name boasts of modernness, this shop was inaugurated in 1919 by King Alfonso XIII, who was also behind its creation. The monarch was fascinated by the world of beekeeping and wanted to establish a Spanish company devoted solely to professional production of beehives. Basque-born Antonio Garay Vitorica, one of the many wealthy men who arrived in Madrid at the beginning of the 20th century, was tasked with launching the business, which in those early days had a workshop in the back of the building that houses it. The shop we see today was actually the office. Its interesting facade is the work of Secundino Zuazo, the architect who designed iconic Madrid buildings such as Palacio de la Música on Gran Vía avenue and Casa de las Flores, where Pablo Neruda lived. It displays a beehive and a swarm of bees painted on stone. The interior still has some of the factory’s original elements, including steel honey tanks and some marvellous stained-glass windows created back in the day by Casa Maumejean, the same company that designed the dome of the Hotel Palace. 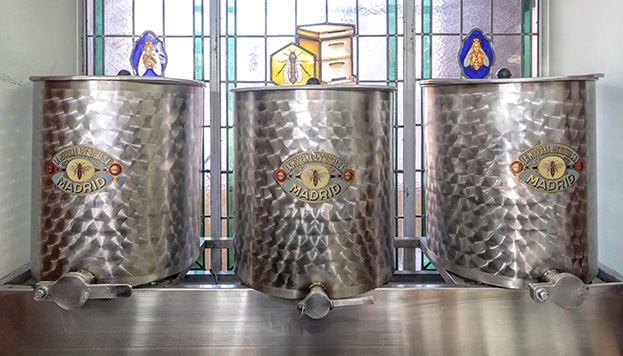 La Moderna Apicultura sold hives and tools to all of the beekeepers in Spain. Although the factory no longer exists, the establishment is regarded as the oldest shop devoted to selling Spanish honey. Aurora Jiménez, who runs the establishment, reminds us that they only select the very best honey produced in our country. They also sell it in bulk: just take a jar and fill it with the delectable mixed-flower honey that pours out of the original tanks. The shop sells 30 different varieties, from the mildest, orange or lemon blossom honey, to much more intense options like strawberry tree, lavender and chestnut honey. 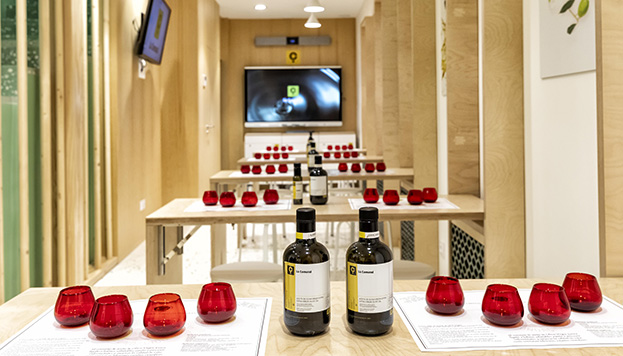 Try and wrap your head around this number: olive tree cultivation takes up 2.75 million hectares of land in Spain, the world’s biggest producer of extra virgin olive oil. The desire to encourage its consumption and promote its health benefits led to the creation of the private non-profit organisation Fundación Patrimonio Comunal Olivarero, and one of its primary showcases is this establishment, the sector’s oldest shop in Spain. Founded in 1960 as an exhibition space, today it’s a culinary benchmark that has incorporated advanced audiovisual technology in recent years to provide consumers with all of the information on the product they’re buying. Here, you’ll find EVOO made from all of the different types of olives cultivated in Spain (arbequina, cornicabra, hojiblanca, ocal, picual, etc.), which are what gives an oil its unique flavour and aroma. It offers over 150 different types of EVOO. 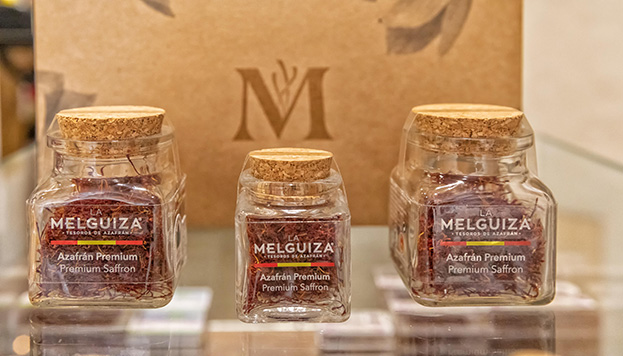 Smell, look and feel. That’s what this beautiful shop, just a stone’s throw away from San Miguel Market, invites you to do. It’s the only store in Spain devoted wholly to the sale of saffron, the world’s most expensive spice. David Sáenz and Marta Huerva own this unique establishment featuring a system of luminaires and hanging display cases that create a wonderland of strands along the entire shop. The ceiling is covered with wooden beam fill. The colours and materials used evoke the typical design of the buildings where saffron was prepared and toasted after harvesting. The saffron sold here has the Castilla La Mancha designation of origin, although there’s also a variety from Teruel. In addition to the red gold itself, you can buy other gourmet items (chocolate, oil, jams) and even soap and shampoo made with the shop’s star product. 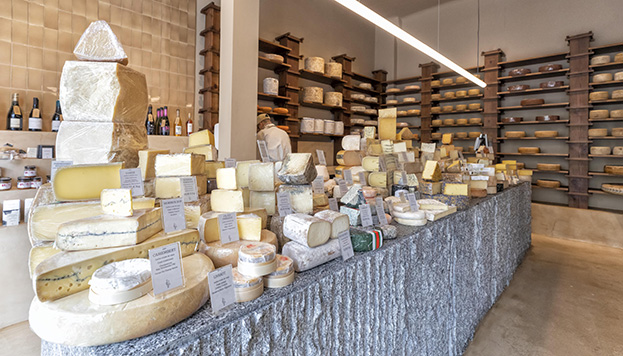 Clara and Adrián are the founders of this shop in the Chamberí neighbourhood, created to promote the excellence of artisanal cheese. The quality of the milk used, cattle-feeding methods, meticulous care in the cheesemaking process and a commitment to having a positive impact on the production environment are decisive factors in the excellence of a food they say can “create bonds”. At this shop, they offer customers cheeses made using traditional techniques that have no additives which aren’t essential for making cheese: milk, rennet, cultures and salt. Their catalogue includes many international cheeses, but the bulk of the offerings are made in Spain: from a cured Cebrerio from Lugo to a truffled Granizo from Albacete to a creamy Besos de Rey Silo from Asturias, a paprika-coated Majorero from Fuerteventura and a Tronchón from Castellón. 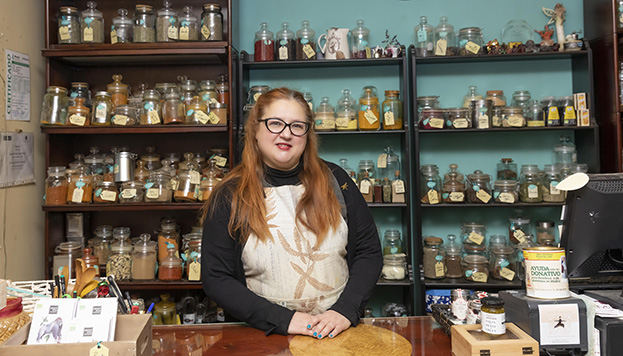 Julia, who everyone calls Yuli, is the owner of this small, charming shop that sells spices from all over the world and extremely fresh, high-quality teas. Ceylon cinnamon sticks, which are perfect for desserts, barberry, a sour berry used in Iran in rice dishes and stews, and mastic from Chios, a solid resin from the mastic tree that’s commonly used in Greek and Turkish cuisine, are just some of the delicate surprises you’ll find in her extensive catalogue of treasures, which also offers ground green cardamom, sumac, tonka beans, caraway seeds and more. It’s a veritable encyclopaedia of flavour! If you’re looking for a night of uninterrupted sleep, try their Good Night Kisses tea. 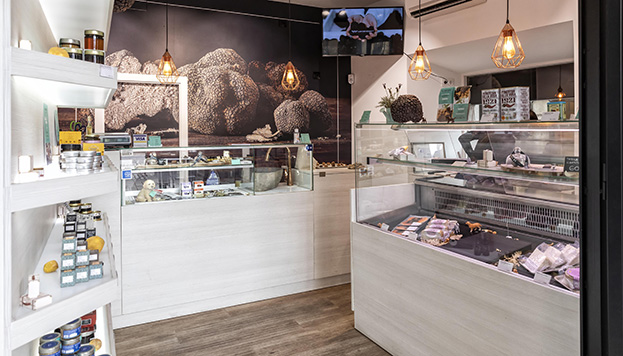 Black truffles are an iconic gourmet ingredient: their use in the Mediterranean Basin goes back to time immemorial. Hidden under the soil, the truffles are collected using only traditional methods. As they explain to us in this interesting shop, this adds extra value to a food that’s distinguished by an intense, pungent aroma that calls to mind wet earth, roots and wood. Opened just a few months ago in Plaza Mayor, they sell black truffles but also the coveted white truffles, which smell strongly of garlic and benzene, and Brumale truffles, which are more versatile. You can also buy summer truffles, which are very light and add a bit of crunch to any dish. Keep in mind, though, that they’re only available on a seasonal basis.