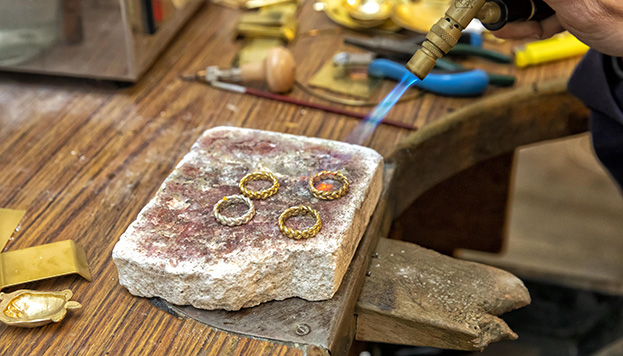 Much more than simple a form of adornment, pieces of jewellery are dreams come true in the eyes of these makers who, in their studios in Madrid, uphold an artisan tradition deeply rooted in our city. 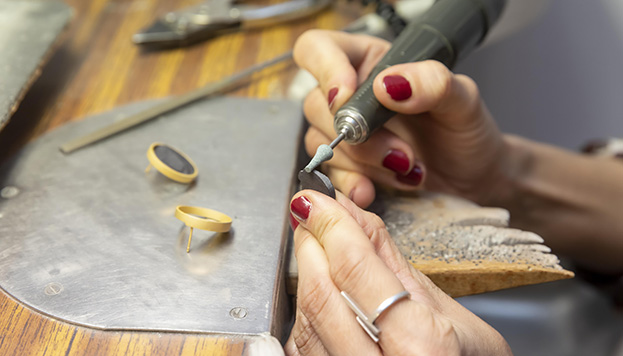 Visit any archaeological museum around the world and you’ll see how men and women from prehistoric times used shells, bones and even animal fangs to adorn their body. It was the Egyptians who first used gold as a symbol of status, and the Greeks and Romans followed suit, with only certain members of society being allowed to wear rings. The word “jewel” comes from the Latin jocale, which means game or play, while the Spanish synonym “alhaja” comes from Arabic and means “precious object”. The Guild of Jewellers, Silversmiths and Watchmakers is accordingly steeped in tradition: it was founded in 1572, only a few years after Felipe II of Spain made Madrid the capital of the kingdom. It was one of the major guilds that later formed Madrid’s Chamber of Commerce, and it is the oldest of those still around today. Despite the tradition harking back many years, contemporary makers of artisan jewellery are also happy to embrace new trends. Let’s visit some of their studios to discover how they work today. 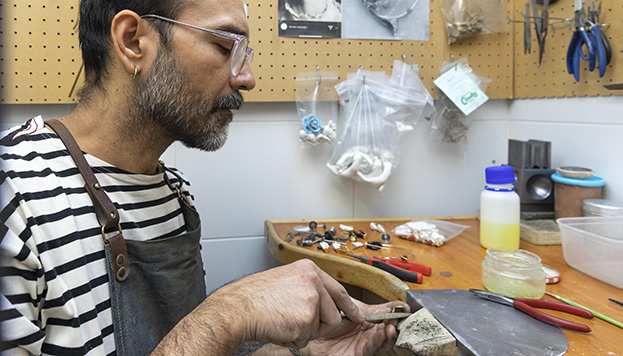 This studio started out making necklaces and bracelets from pieces of broken porcelain unearthed at markets and antique stores, crafting something similar to 3D collages. Today in their studio-store in the Barrio de las Letras, they craft their own items, which are easily recognisable thanks to their use of naïve, mysterious images of rabbits, hands, suns, moons, greyhounds, flowers, and more. The intuitive and meticulous way in which they work is pioneering, as they reclaim and employ the potential of artisan crafts from a contemporary perspective. Excellence and approachability are two terms that this business is very familiar with. 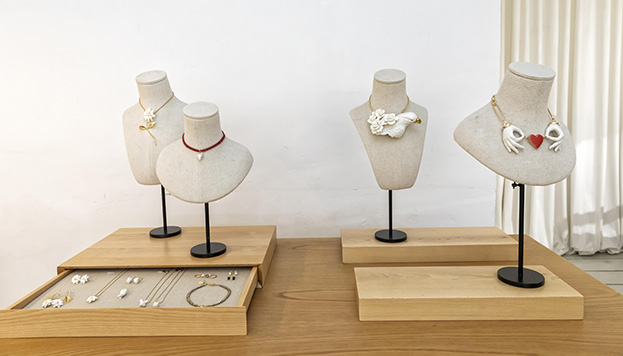 “We feel that each step we have taken has happened naturally. Creativity, craft and authentic relationships based on mutual respect underpin Andrés Gallardo, both as a business and as a brand,” they tell us. They also point out that there isn’t one person behind this name, but instead an entire team that has become a family. They started back in the year 2010, when they began experimenting without limits, motivated by their own needs, placing creativity at the centre of the process, and crafting with their two hands. Today, in collaboration with artisans based in Spain and Portugal, they continue to reclaim traditional techniques. Their imaginary takes inspiration from topics such as magic, love, and flora and fauna, with their latest collection including strawberries and lifelike faces of mice and kittens crafted in porcelain for necklaces, rings and earrings. A craft in which there is a great deal of care and expertise. 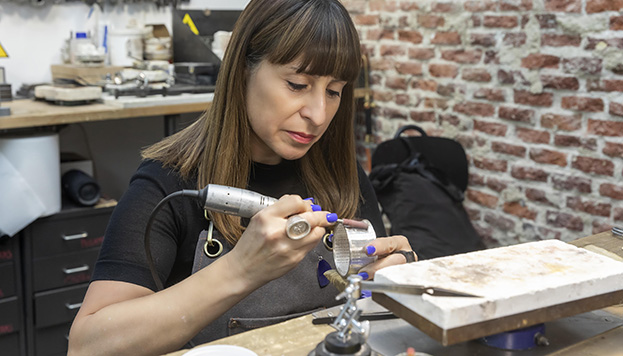 Founded by Gimena Caram and Sandra Pampín, this jewellery studio is also a school, the natural result of the love these two makers have for design and creative processes. Here you’ll find micromotors, soldering irons, fretsaws, polishers, mallets, shears, pliers, and hammers tucked away in corners and also scattered around this charming space in the Lavapiés district, also home to a store and showroom. Because what these two passionate women want, more than anything, is for their studio to be a place of dialogue and meeting for artists and the public. And for those who are just getting started in this world, they also offer 48-hour courses in which they teach the basic techniques for metal jewellery making and an introduction to wax pieces and setting. 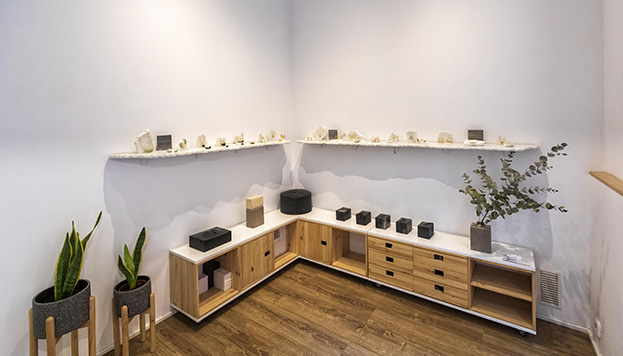 Dsnú is a design studio with an artisan workshop formed by Ana Martínez (architect and jeweller) and David de Felipe (visual artist and ceramicist); it is the result of an idea to create bespoke items by combining their knowledge of traditional techniques and materials, applied from a temporary point of view. The name of the studio comes from a made-up abbreviation of the Spanish words for design and nude – diseño and desnudo respectively – which captures the concept behind their work: to create pieces stripped of everything except what is necessary and which accentuate the elegance of simplicity. The result is unique pieces made by means of environmentally friendly artisan processes. The pure geometric shapes of their designs contrast with the organic, expressive character of the materials they use, such as porcelain, metal and wood. Subtlety is what they do well. Their mission? To move those who see their jewellery. Their Atlas collection is inspired by the world of maps, Zumaia by the rocky terrain of the Basque town of the same name, and Fragmentos by the relationship between architecture and natural landscapes. 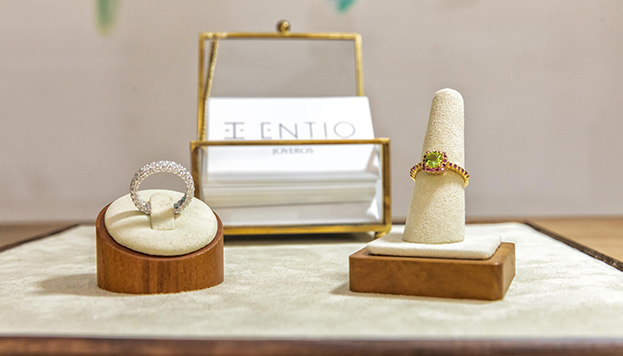 In the words of the Entío siblings, great devotees of their profession and extraordinary creatives: “Our jewellery can be defined by contemporary design, completely tailored to each client, and with every last detail taken care of”. The grandchildren of traditional artisans from Madrid, they are authentic experts in jewellery making, gemology and setting techniques. Proficient in classic techniques, they have also welcomed the latest trends in design and production methods to their way of working. Today, you’ll find them at the helm of a small and very enthusiastic team of artisans and creators who design, craft and sell exclusive bespoke bracelets and pieces of jewellery made to order. We’re fans of their philosophy: “wearing original, attractive pieces should not be a luxury afforded by a mere few, but a privilege enjoyed by many.” At their store-studio in the Chueca neighbourhood you’ll find tools steeped in generations of history alongside the latest 3D technology. 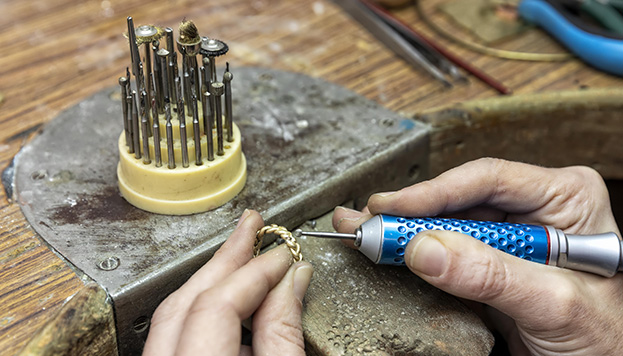 Almudena Gil is behind Circo. Since the year 2005, she has been designing unique items that celebrate the beauty of imperfection, combining surrealism, pop culture and shapes from the natural world. She makes her collections using completely artisan methods including the lost wax casting technique, one of the oldest forms of sculpture, and from materials such as silver, coral and brass. She also works with antiques and other objects she finds in second-hand stores and flea markets. “Each piece is crafted in its own individual way; it has its own personality and is the result of much love and many hours of work,” Almudena tells us, sharing with us her mission, which is “for everyone to find their own piece”. Her best-sellers include her heart ring, turtle cuff, the Calypso necklace, and her snake bracelet.