From Gran Vía to Heaven 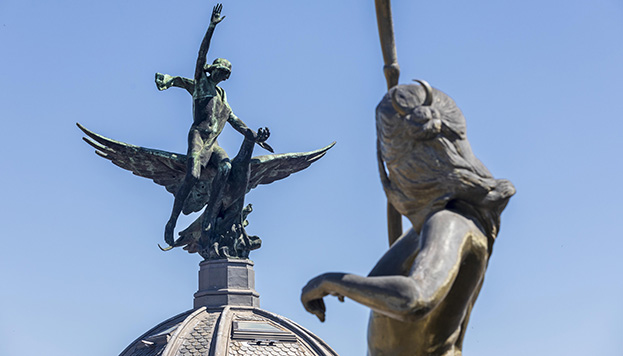 High up on this century-old Madrid avenue, sculptures of gods, humans and creatures of all kind exist side-by-side. Read on to discover what these iconic symbols of our city represent. 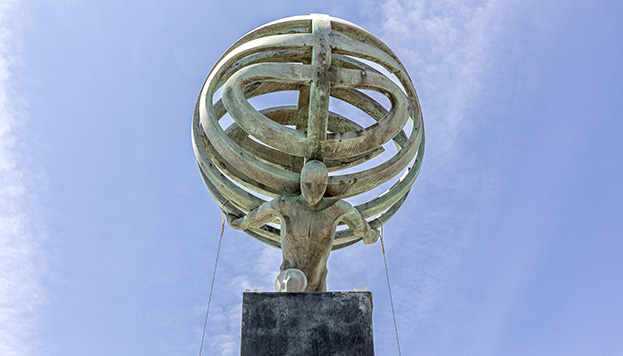 Pay close attention to the following verses by Luis Quiñones de Benavente, one of the most celebrated entremésauthors of the Spanish Golden Age: “For winter and summer / Are only good in Madrid / From the cradle to Madrid / And from Madrid to Heaven”. Could this be the origin of our famous saying, “From Madrid to Heaven”, which proudly exalts us right up to the clouds? Perhaps, although theories abound. Some say it became popular centuries later, after the city’s transformation by Charles III, to whom we owe Puerta de Alcalá gate and Paseo del Prado. Others seek more metaphysical origins, claiming that every night the souls of Madrid’s dead gather at Cerro Garabitas in Casa de Campo Park where they become little specks of light that ascend to infinity… Reality and myth aside, there’s no doubt the famous saying is particularly meaningful when we’re referring to the century-old avenue of Gran Vía, home for years to Europe’s tallest buildings. Just cast your gaze up to its highest roofs, and you’ll find a host of characters overlooking the city. 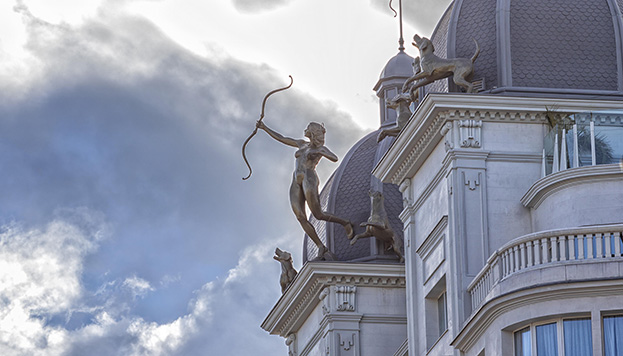 All of us enjoy a bit of classical mythology, and if we look up from Plaza del Callao towards the junction of Gran Vía and Calle de Alcalá, we can relive one its many love stories. Two silhouettes, one on either side of the street, catch our eye. If we go a little bit nearer, we’ll see on top of the Hotel Hyatt Centric Gran Vía, located at number 31 in an Art Decó building, a mighty Diana that has graced our skyline since 2017. The spectacular sculpture, created by Natividad Sánchez, depicts the Roman goddess of the hunt, nature and the moon, in the company of her five dogs. Made from vinyl ester resin and coated in bronze powder, it stands five metres tall and weighs 900 kilos. For the best close-up view of it, head to the hotel’s rooftop bar, El Jardín de Diana. 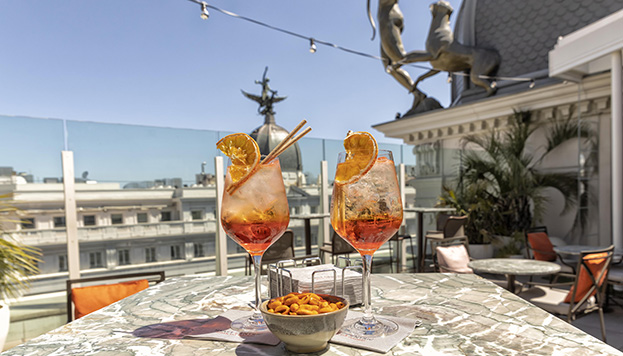 While the sun sets, you can sip a cocktail —how about an “Arcángel de Diana”, made with gin, aperol, fresh cucumber and grapefruit soda— and enjoy some tapas, as you turn your gaze to the edifice opposite. Standing atop the former Madrid-Paris building (number 32), built in the 1920s to house the city’s first department store, you’ll see the Phoenix, our goddess’ rival in the battle that’s being waged in Madrid’s skies. The immortal bird, which is said to rise from the ashes of its predecessor, confronts her from across the street. It was placed there, atop a black dome, in the 1950s when the building was acquired by the insurance company La Unión y el Fénix (“The Union and the Phoenix”). Today, it houses the clothing retailer Primark. 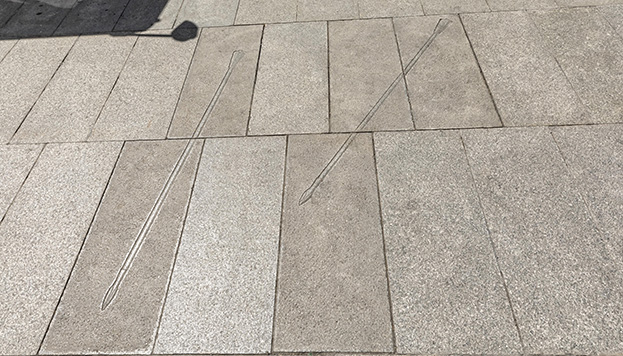 But what is the story that unites these two characters? Well, clearly not a happy one, for Diana is pointing her bow right at the bird. In Greek mythology, our goddess, who was known as Selene, was the daughter of Zeus. She fell in love with a shepherd called Endymion, and upon discovering this, Zeus became enraged and sent the Phoenix to snatch the mortal and hide him away for all eternity. That’s why the battle is raging, and why she’s shooting her arrows. If you glance down, you’ll see that two of them have fallen to the ground. It’s not hard to find them: they’re etched into the pavement, right in front of the building where her enemy stands. In the old days, stonemasons always left marks in the stone they had finished carving so their work could be identified. Recently, architects in Madrid have decided to pay tribute to the masters of the past and have started leaving their own kind of masons’ marks in their restoration work. Two other examples you can spot in the capital: at the beginning of Calle de Alcalá next to Puerta del Sol, a sun king is etched into a tile on the ground, and in front of no. 16 Calle de Augusto Figueroa, there’s a cat that’s as much of a Madrileño as the man the street’s named after. 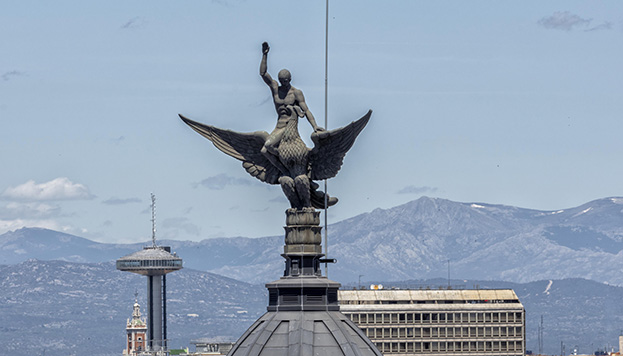 The phoenix threatening Diana isn’t the only one you’ll find on Gran Vía. If you walk back towards Plaza del Callao in the direction of Plaza de España, just a few metres away you’ll see another similar silhouette atop the building at number 68, which also belonged to the insurance company. They used the same decorative element to adorn all of their premises. Although artist Natividad Sánchez likes to think it’s Endymion who is sitting on its back, the male figure you see here could well be Ganymede, a handsome Trojan prince kidnapped by Zeus to be his lover. 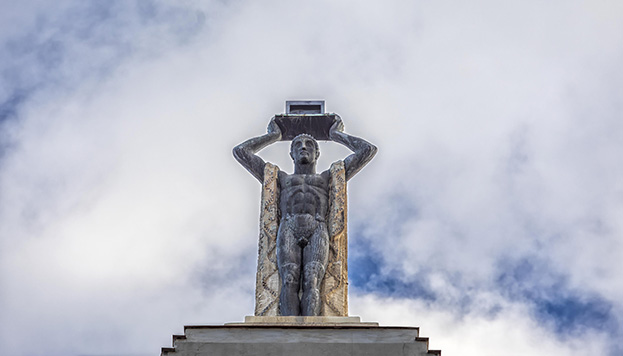 The best view of this second Phoenix is from the rooftop of the Hotel Emperador (no. 53 Gran Vía), which has a “Beach Club” around its fantastic pool, a solarium, Balinese beds and a “chill-out zone”. It’s the perfect place to enjoy a cocktail while taking in amazing views of the city. It’s also the ideal place to admire another of the sculptures that adorn Madrid’s sky. This one doesn’t have an official name, but it’s known as The Roman (no. 60 Gran Vía). Completely naked but for a white cape that’s falling off his shoulders, this super man, who is balancing a temple on top of his head, stands over seven and a half metres tall. The statue was cast in bronze in 1930 by sculptor Victorio Macho, who created various monuments in Madrid such as those honouring Benito Pérez Galdós and Santiago Ramón y Cajal in El Retiro Park. Why is it there? No one knows for sure. It could be a symbol of savings, as the building, rebuilt after the Spanish Civil War by architect Casto Fernández-Shaw, was once the headquarters of the bank Banco Hispano de Edificación. 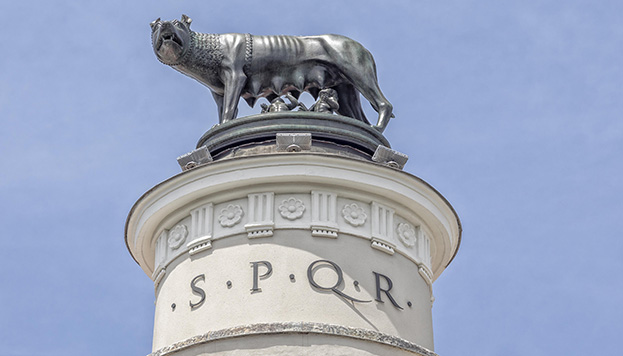 Echoes of the old Empire will lead us to no. 18 Gran Vía, the first building on the avenue which opened its doors in 1915 as Hotel Roma. Built by architect Eduardo Reynals Toledo, it’s now enjoying a new lease of life after being refurbished by Carmelo Zappulla. Its most iconic features have been restored to their former glory, including an elegant French-style facade, a turret and the Capitoline Wolf suckling Romulus and Remus, which, along with the initials SPQR, originally crowned the building. After the Spanish Civil War, the building was used for various purposes, but they were nothing like the current one: since March, it has housed an eight-floor megastore called WOW, an original phygital universe that brings together brands and creators (of fashion, decor, technology, lifestyle products, and so on). As a symbol for our times, the she-wolf is now once again displayed atop the building, although it is a replica because the original was lost many years ago after being dismantled. 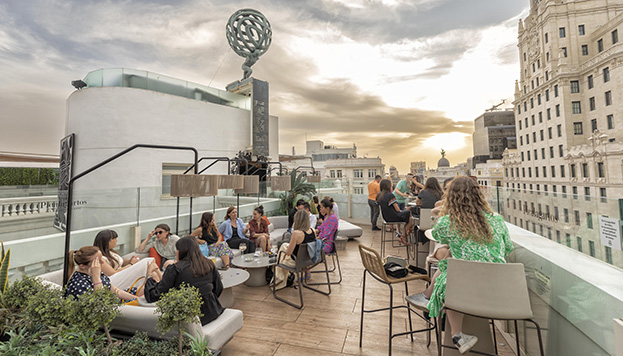 From her den up high, the she-wolf looks down on the passers-by strolling along Gran Vía. So, in fact, does Atlas, from the top of the Hotel NH Collection Madrid Gran Vía (no. 21 Gran Vía). The titan, condemned to hold the world on his shoulders as a punishment handed out by Zeus, was created by Future Arquitecturas and is the newest addition to the guardians who watch over Madrid’s sky. Placed there in 2019 and made of fibreglass and covered in bronze powder to achieve a more classic effect, the sculpture is almost three-and-a-half metres tall. It makes for an impressive sight from the hotel’s lively sky bar Picalagartos, a trendy spot to have a drink or some food at any time of day while enjoying the views. No doubt if he could, Atlas would happily stop in for its delicious brunch to restore his strength.