Cinema Under the Stars 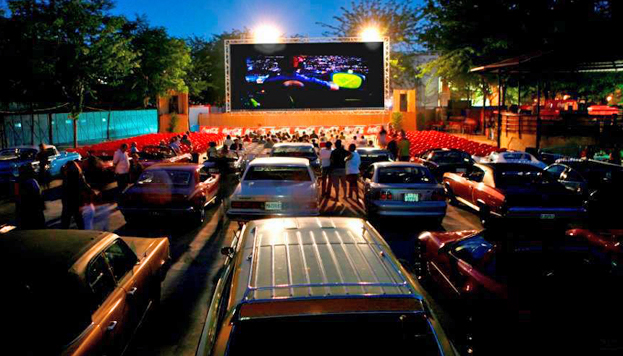 The unblemished summer sky has given rise to more open-air cinemas in the Spanish capital. And in Madrid, a night at the movies also gives you an opportunity to explore some of the capital’s most iconic buildings. From the daring programme projected inside the Palacio de Cibeles’ “crystal patio” and the commercial blockbusters and indie hits shown in a park alongside the Real Parroquia San Antonio de la Florida (with frescos painted by Goya) to the feel-good flicks screened in the quadrangle of an old military barracks – a touch of Madrid movie escapism is also a walk through local architectural history.

Spearheaded by some of Madrid’s most fanatical film buffs, the selection of films reflects a love of celluloid spanning several decades. Sit under the open sky and enjoy everything from the cult classics of yesteryear to recent commercial crowd-pleasers – and for visitors to the city – it’s also important to highlight that they’re shown in Version Original, meaning these cinemas are Dubbing-Free-Zones.

If the empty August streets are lacking adventure, then head to one of these box-offices and let the spectacle of cinema transport you elsewhere – even if it’s just for a couple of hours.

As an added courtesy, if you click on any of the movie titles mentioned below, you’ll be able to see how well they fared on the movie-lovers website rottentomatoes.com. It will help you make your pick… 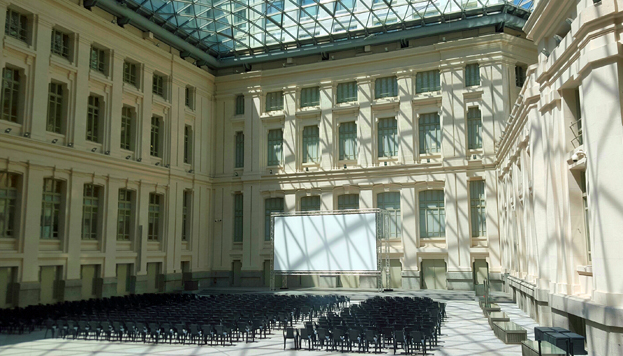 It’s not that often that you get the chance to visit the interior patio of Madrid City Hall. However, as part of the CentroCentro cultural programme, the Sunset Cinema has opened up the space (usually reserved for special events) to late night crowds until the 2nd of September. You’ll have to enter through the main entrance of the palatial building and gather in the main hall before entering the central patio, which was enclosed with a geometric atrium as part of the building’s ambitious rennovation. Apart from the stunning space, there are several other features that set this cinema apart. Chef Juan Pozuelo has created a delicious menu of finger-food, there’s a fully stocked bar (with some very refreshing mojitos), and the sound is broadcast via cordless headphones – meaning you won’t be bothered by anyone talking during the movie.

Nightcrawler, Trainspotting, E.T., Back to the Future, Jaws, Pulp Fiction and Labyrinth. 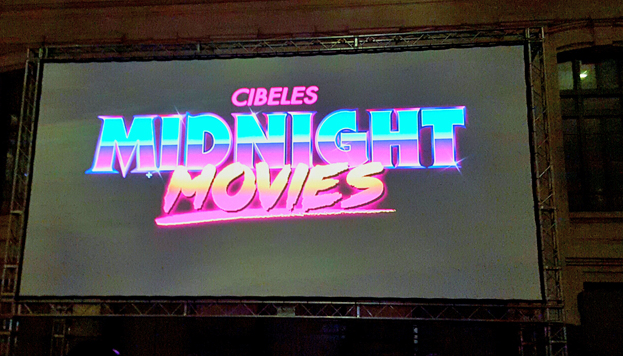 Screened in the same spectacular space as the Sunset Cinema, the Cibeles Midnight Movie programme is spread across Friday, Saturday and Sunday and aimed at the more salacious, intrepid, and cultivated filmgoer. Programmed by local heavyweight Popy Blasco, who writes for various publications about film as well as on his blog (http://popyb.blogspot.com.es/), the wonder of being able to watch risqué films such as Showgirls and David Lynch’s Wild at Heart in the very heart of city hall should not be underestimated. “Fortunately Madrid has been changing a lot in relation to culture and we’re seeing a return to the respect for art that the city had during La Movida of the 1980s,” says Blasco, who believes the city council should be applauded for not putting restrictions on his selection. “What should be the limit of art?” he adds rhetorically. Apart from the uncensored selection of films from the 80s, 90s, and 00s, from the horror classic Evil Dead to the black comedy Death Becomes Her, Blasco also includes a short film or clip before each film to set the tone for the feature. “These clips relate to the film in some way. Sometimes they are simply youtube clips that went viral – but you never know what will happen…” he adds with a touch of movie mystery. 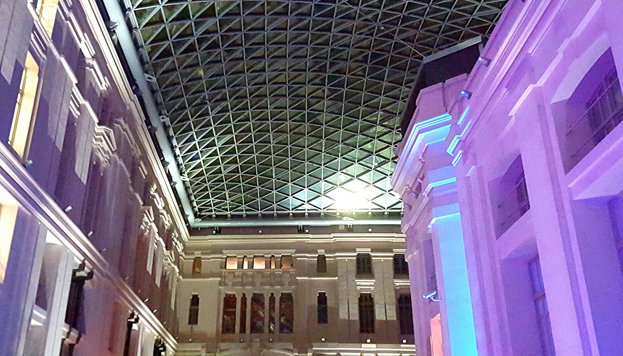 True Romance, The Texas Chainsaw Massacre, Stand by Me, Manhattan Murder Mystery, Harold and Maude and Eternal Sunshine of the Spotless Mind. 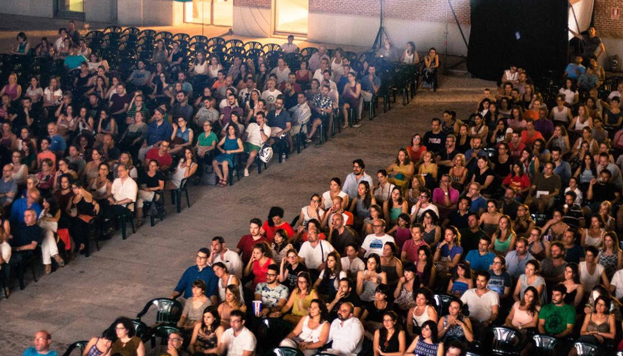 Tucked away inside a centuries-old military barracks turned cultural centre (Centro Cultural de Conde Duque), The Urban Beach Cinema brings the quiet yet cool Conde Duque district to life each summer. The cinema is part of a larger pop-up project that includes a chiringuito beach bar, delicious food served from food trucks and the Nomáda design market held over the weekend. Located in the neighbouring quadrangle, the cinema is themed by genre. Family flicks are shown on Mondays, silent films on Thursdays, the very-popular sing-a-long musical movies are each Friday, while science fiction buffs are entertained on Saturdays. “We attract a very wide audience,” says co-organiser Valeria Reyes. “A lot of families come to the Sing-a-long movies but being a summer project, all kinds of people come along – drawn here by one of the most fun, summer-themed plans possible.” The best part of this cinema is the proximity to the comfortable terrace bar. After the film, head next door for a drink and a post-screening de-brief. If there isn’t much to say, you can always try to start an impromptu dance floor in front of the DJ booth. 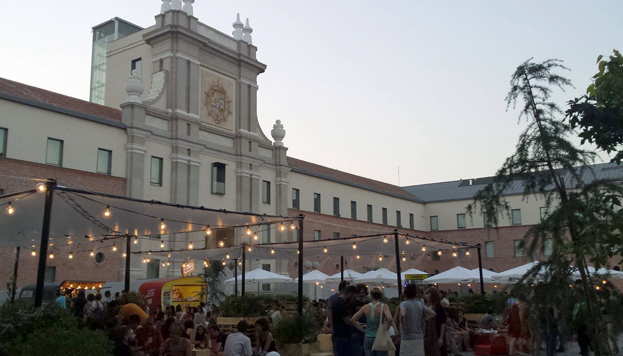 Getting There: Metro station Plaza de España or Noviciado. 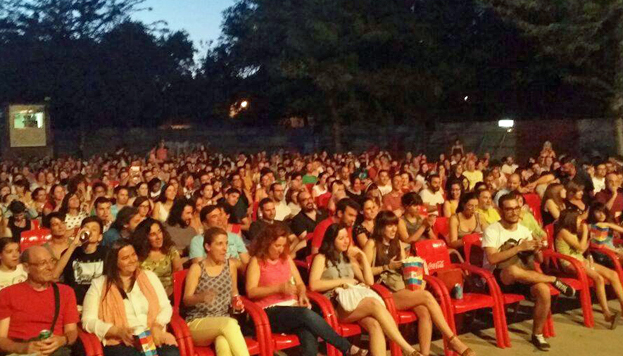 This family-run, summer cinema has been delighting local audiences for thirty-one years. What began as a small open-air cinema in the Buen Retiro park then moved alongside the Templo de Debod until finding a more permanent home in the Bombilla Park alongside the Real Parroquia San Antonio de la Florida – a chapel that boasts beautiful frescos by Goya. “Ever since my mother and father started the cinema we’ve been experimenting with new genres and formats for our audiences – the aim is to always provide something new for Madrileños,” says David Lluisma, who after growing up below the silver screen, now runs the cinema with his wife. “Ours is the biggest outdoor cinema in Madrid, with 1400 seats and a 14 x 7 metre screen, but we also have double screenings; meaning you get two movies for the price of one.” For non-Spanish speakers, it is important to know that films are only screened in “Version Original” on Monday nights (see the selection below) but on the flipside, Wednesdays are dedicated to Spanish films and tend to attract foreign audiences looking to improve their Spanish. “We try to invite the directors of these films to create a more interactive discussion after the screening,” explains David. From the 8th of August until the end of the month, an exhibition of ninety original movie posters by Saul Bass will also provide an extra dose of movie magic. And, if the mercury continues to boil long into the sweltering August night, the parkland that surrounds this cinema lowers  the temperature by a substantial 5-6 degrees compared to the city centre. “This extra bonus makes us even more popular,” adds David. “The higher the temperature, the busier we are!”

Some of the ‘Version Original’ flicks to look out for over August include:

Levianthan (in Russian), Timbuktu (in French) and Les Combattants (in French).

Some of the Spanish flicks showing include:

Getting There: Metro station Principe Pío (followed by a short walk)