Madrid is fast securing its place as one of the world’s gastronomic capitals. The Spanish capital has over 3,100 restaurants, a sprawling network of vibrant neighbourhood food markets, and a growing arsenal of Michelin stars under its belt.

However, Madrid’s food culture is much more than its celebrity chefs, haute cuisine, and high-end eateries. Once you slice through the headline-grabbing fanfare, a new generation of talented youngsters is busy cultivating a grassroots scene that is not only delighting local diners but also paving their own way to future stardom. For the second part in this series we introduce you to some of the talented new kids on the block so you can pull up a chair and taste their culinary creations. 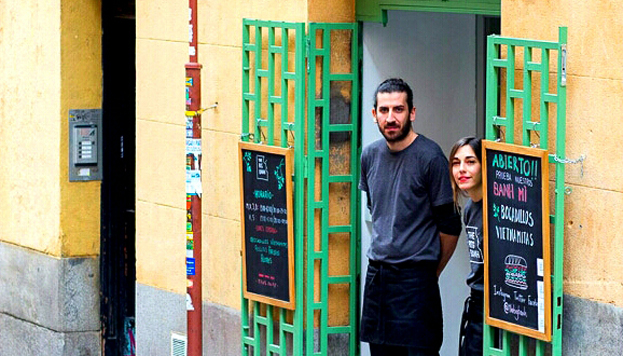 Friends Carlos Zoido and Paloma Sosa recently opened their petit Vietnamese sandwich shop in Malasaña only a few weeks ago. Walk a few steps down Calle Don Felipe from the popular Plaza San Ildefonso and you’ll find the pair preparing a select range of chicken, pork, veal, and vegetarian banh mi sandwiches as well as a selection of rice paper rolls and desserts. “We wanted to create an authentic Vietnamese sandwich instead of another fusion eatery, which are so ubiquitous in Madrid,” says Carlos. The former industrial engineer of fifteen years traded his design tools for an apron and can now be found proudly baking fresh baguettes each day. Paloma, an event producer, lends her expertise to the growth of the burgeoning business. With the eruption of fast-food themed outlets on the perpendicular street Corredera Alta de San Pablo, The Big Banh is a welcome addition for those searching for a tastier and healthier option. Be mindful of the opening hours though – The Big Banh has more of a Spanish restaurant timetable – which means it is closed between 4pm and 8pm. 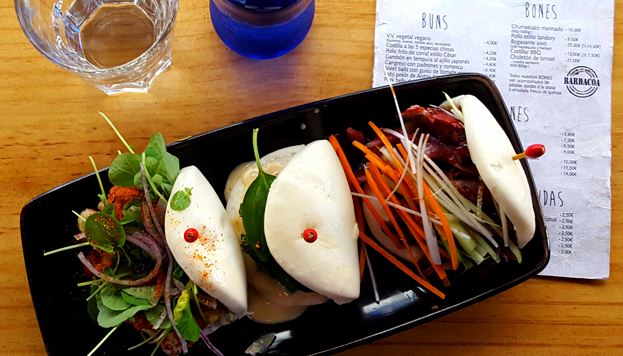 The transformation of the Antón Martín neighbourhood market into a thriving multicultural gastronomic hub received a boost when this street-food styled stall opened on the exterior corner a few months ago. Serving up a scrumptious selection of bao buns (including one filled with delicious duck and another of soft shell crab) and a variety of barbequed bones dished up on wooden boards, the only trouble you’ll have at this busy location is securing a seat. Owner Marco Martínez brings plenty of experience to the table from his other establishments Carbones 13, Matute, and the Terraza Atenas, but Buns & Bones is a more relaxed affair in keeping with the gritty market vibe. Market aromas (some of them quite potent) waft into the space adding to authentic feel. Don’t be afraid to order a cocktail to wash down your food; with mixes that include mezcal, sake, and the Japanese cherry liqueur umeshu, the drinks are just as exotic as the market fresh menu. 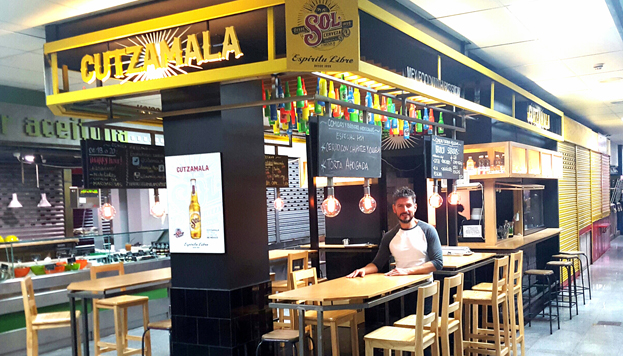 Located on the ground floor of the same Antón Martín market, another new stall has been cooking up an array of tangy dishes – this time of the Mexican variety. Owner Uriel Coria Maldonado decided to leave the stuffy corporate world over a year ago and can now be found happily serving his diverse range of daily customers. “I went from developing apps to developing tacos,” he says with a smile. He named his eatery after his family’s town in Mexico and his flair in the kitchen was inspired – in part – by his mother, who after cooking for his 5 older siblings, decided to go into early cooking retirement, forcing Uriel to step up to the stove himself at the age of 13. The authentic dishes are concocted from the freshly sourced market ingredients and the menu changes daily. “There’s a symbiosis between the traditional merchants and the new street food stalls,” he explains. “More and more different people are being drawn into the market and management now keeps the space open until 11pm every night.” 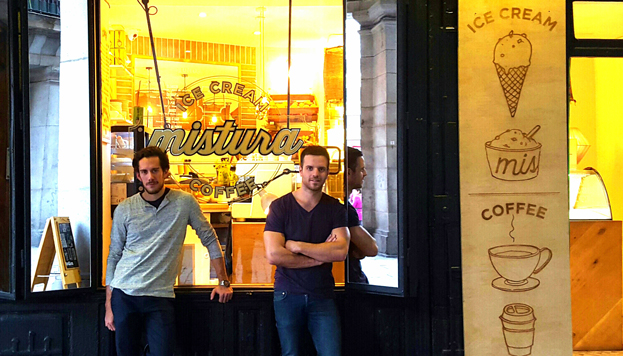 There’s no stopping this duo of 26-year-olds. After opening their first ice creamery in the summer of 2013, Madrileños Carmelo Rodríguez García and Carlos Sotomayor Marquina have since expanded with two additional locations – one in the iconic Plaza Mayor and recently a new outing inside the flagship store of New Balance on Gran Vía. Their natural ice cream flavours have garnered legions of adoring fans but it’s the frozen stone concept (which allows you to mix in fresh fruit, nuts, chocolate, and jams into your favourite flavours) that truly sets them apart. The pair discovered the concept during a stint in India and successfully built the idea into a successful business. Their recent collaboration with New Balance (you’ll find their new in-house café and ice creamery at the back of the store) is the culmination of months of hard work. “It was a natural fit because we share similar values and the same customer base,” says Carlos. After starting with just 2 employees, Mistura now boasts a team of 15, all of whom have become renowned for their distinct style and upbeat attitude. According to Carmelo, plans are also afoot for further expansion. “We’re looking to open a fourth location in Madrid and a fifth somewhere else on the coast.” 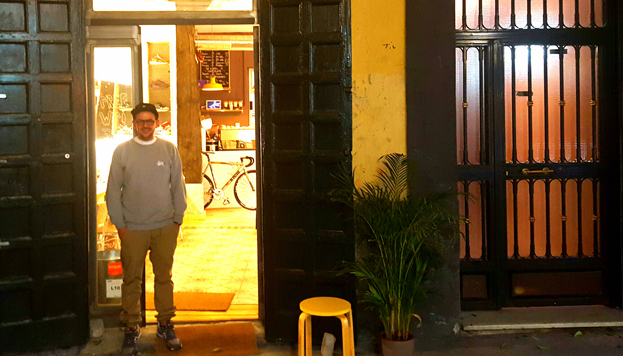 Madrid is quickly catching up to Barcelona as the Spanish capital of good coffee, and Guillermo Lasalle’s small espresso bar Coffee & Kicks is one of the newest talents to appear on the scene. Tucked away in what is seen as Madrid’s touristy epicentre, Guille found a small space on a relatively quiet street just a short walk from the buzzing plaza Callao. Originally from León, the young Spaniard came to Madrid to study but stayed in the capital after deciding to open up his mini café, which channels his dual love of caffeine and trainers (you’ll quickly notice the limited sneakers decorating the space). Coffee and Kicks is not only one of the most conveniently located establishments, it’s also one of the friendliest. If you’re looking for a quick coffee break as you roam the city centre be sure to stop by and visit the young barista and taste his skilfully brewed coffee. For more insight into Madrid’s new forces of food talent, check out Volume. 1.