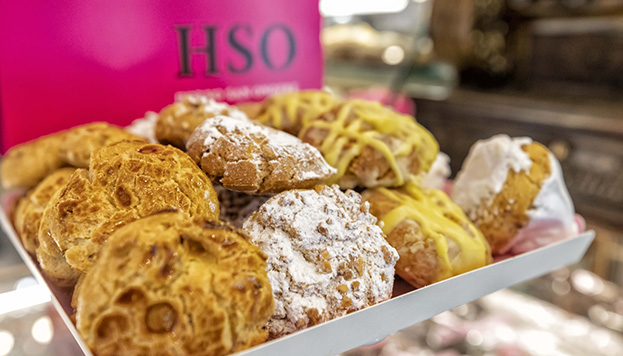 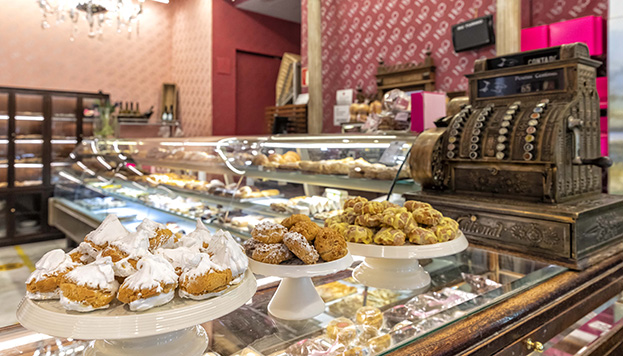 If you’re in Madrid and it’s May, that means it’s time to enjoy the rosquillas (traditional doughnuts) made in honour of our patron saint, Isidore the Farmer. According to custom, they should be eaten on the 15th, his feast day, which explains why the window displays of the city’s patisseries suddenly look more tempting than ever. But before you go out and buy some, or maybe try making them at home, read on for a bit of history. Rosquillas have their origins back in the ancient Roman Empire, during which the art of making them spread through much of Europe and the Mediterranean basin. And if it’s customary to eat them in Madrid during the San Isidro festivities, maybe we have Aunt Javiera (Tía Javiera) to blame. Perhaps she really existed, perhaps she didn’t, but today the character is part of Madrid’s collective imagination. 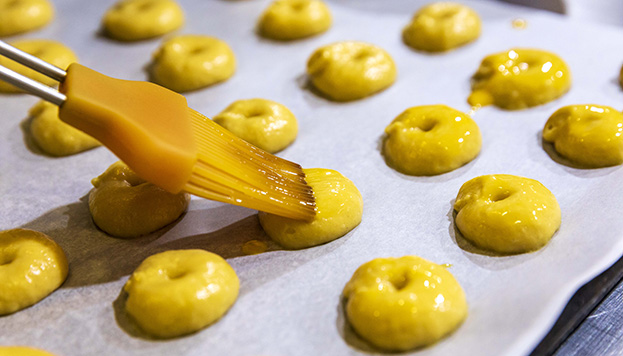 They say she was from Fuenlabrada, or maybe Villarejo de Salvanés, which are both towns with a long rosquilla tradition. Back in the 19th century, she came to Madrid to sell her sweets at the pilgrimage that even then was already held in San Isidro Park in honour of the city’s patron saint. Apparently, hers were the best: the dough had grain alcohol instead of sugar, and they were drizzled with syrup that she left to dry before tying them up with twine. Aunt Javiera had no children, but she did have a good many imitators. She remained popular even after her death, living on through literature, which never forgot her. Ramón Gómez de la Serna comes to mind: “Soon there will be none left, it’s true! / in Madrid there’s neither duke nor shop-boy / to whom Aunt Javiera / isn’t related”. 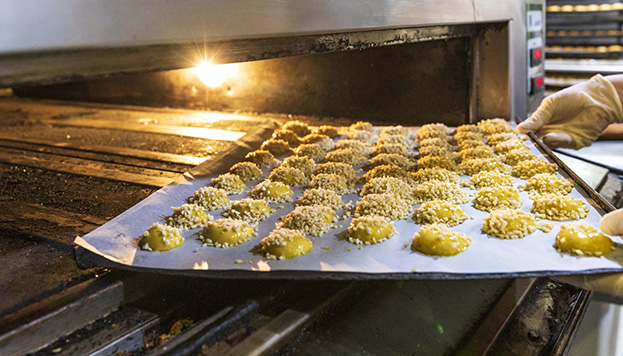 They tell us all of this at Horno San Onofre (no. 3 in Calle de San Onofre), which has been synonymous with baking tradition but also with modern flair since it opened in 1972 in the street it’s named after. It’s a patisserie that’s completely artisanal, where top-quality ingredients, chosen with care, are valued above all else. Just stepping inside and taking a deep breath makes you want to try absolutely everything! But it’s rosquillas that are on the menu today. Making a choice won’t be easy, as they have them in the four varieties typically found in Madrid. 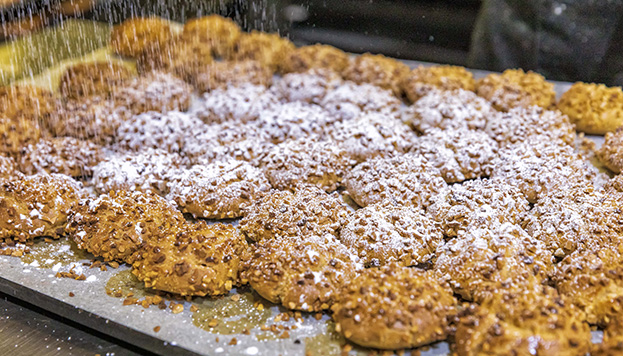 The most famous are the tontas, or “dumb” rosquillas, made with extra-fine sugared flour, anise, cinnamon and a splash of grain alcohol. They’re easy to spot right away, because, as their name might indicate, they’re the plain ones without any glaze or toppings. Those with a sweet tooth will no doubt prefer the listas, or “smart” rosquillas. They’re covered with a thick, sweet yellowish glaze achieved by mixing sugar, egg white, lemon and grain alcohol. 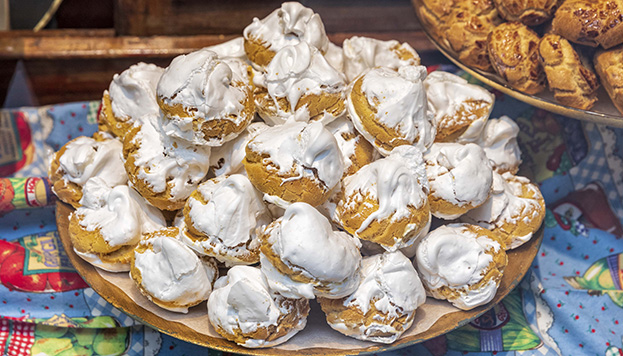 Santa Clara rosquillas are the oldest of all: dry meringue made from egg whites covers only their top and sides. They are named after the nuns of the Order of the Clarisses, who made them famous in the 15th century when they used to make them to raise money for their charitable works. And last we have the francesas, or “French” rosquillas, attributed to a chef -possibly French- who created a glaze from almonds, eggs and sugar to jazz up the “dumb” rosquillas, which had failed to impress Barbara of Portugal, King Ferdinand VI’s wife. 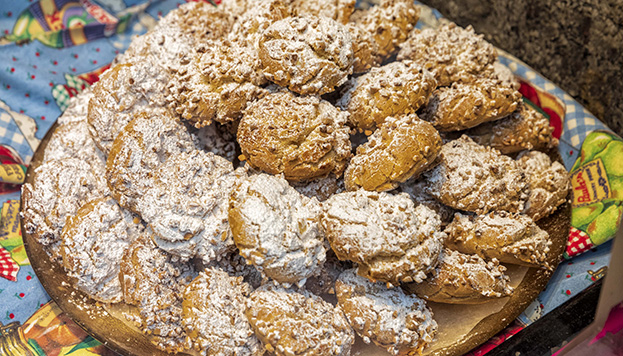 San Isidro rosquillas are one of the specialities at Horno de San Onofre. Today, the establishment is run by Ana and Mónica. They’re the daughters of Daniel and Emilia, who founded what is now one of Madrid’s most famous patisseries. Every May they become worthy heirs to Aunt Javiera, who, legend has it, used to set up her rosquillastall on the path to San Isidro Hermitage, “heading up to the left”. In addition to the shop in Calle de San Onofre, there are three more branches: at no. 9 in Calle Hortaleza, no. 7 in Calle Hernani and the one called La Santiaguesa, at no. 73 in Calle Mayor. 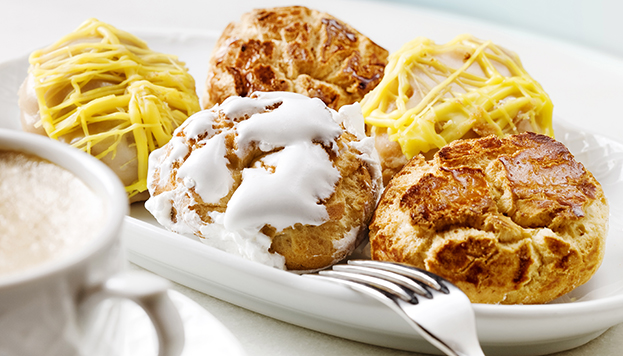 It’s also worth trying the rosquillas at El Riojano (no. 10 Calle Mayor), a delightful patisserie over a century old, at La Mallorquina, which has been filling Puerta del Sol with the wonderful smell of its baked goods since 1894, and at Nunos (no. 63), whose glazes are utterly original (lemon, coffee, anise, chocolate and more). In Madrid it’s also typical to find gourmet rosquillas, like those made by Mallorca, a patisserie founded in 1931 at no. 7 in Calle Bravo Murillo that now has branches all over the city, and Viena Capellanes, which began to operate in 1873 as a small bakery and also has several branches today. It’s been making them since the day it opened. At that time, they were best eaten with coffee or with hot chocolate made from the shop’s own Reina Victoria brand. Last but not least we recommend you check out Sana Locura (General Oraá, 49) who prepare delicious gluten-and lactose-free rosquillas. Happy San Isidro!

Rosquillas: Do you fancy them “dumb” or “smart”? 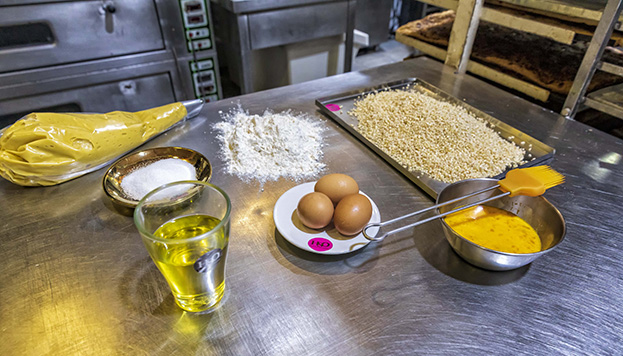 The basic dough is the same for all types of rosquillas. Mix all of the ingredients together and knead for at least 20 minutes. The best way to shape the dough into rings is to use a piping bag with a wide tip. Bake them for 30 minutes at 180°C. 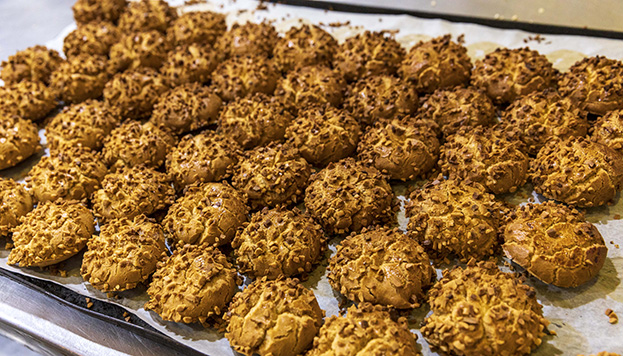 For tontas (“dumb” or plain rosquillas): When the dough is almost ready, add 50 g of aniseed and mix it well into the dough. 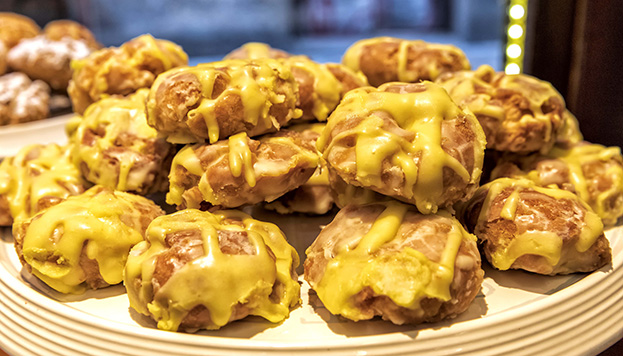 For listas (“smart” or glazed rosquillas): Once you’ve baked and cooled the rosquillas, you’ll need to dip them in two mixtures. The first is a syrup made with 2 litres of water and 200 g of sugar. Dunk them in it until they’re thoroughly drenched. For the second, you’ll need 1 litre of water and 1 kilo of icing sugar. Dunk each one in the glaze… and if you’re as “smart” as these rosquillas, you can figure out what to do now that they’re ready!