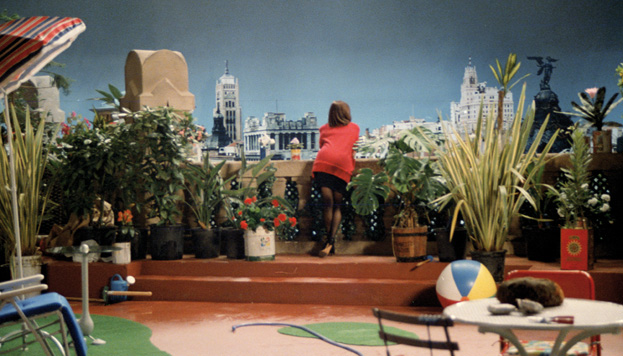 Carmen Maura in Women on the Verge of a Nervous Breakdown

Would you like to discover Pedro Almodóvar’s unique vision of Madrid? I am one of those firm believers that his films would be very different if he’d gone to live to another city. Madrid is essential for understanding Pedro Almodóvar’s films; the city has become one of his main characters, something the director has said in the past: “This city has always provided me with the perfect scenery and suitable fauna (sassy and ideal) for each and every one of my films”.

Although his latest film, which recently premiered in Spain, takes place mostly inside a plane, Madrid still manages to have a little role in the shape of the emblematic Viaduct. A place that most Madrilenians associate with suicide (Paz Vega’s character shows us why), the Viaduct is an example of 1930s Rationalist style. since 1942, when it was completed, lies between Las Vistillas and the Royal Palace.

This is not the first time the director uses this landmark in his films. You will also spot it in Matador (1986), a melodrama about death in all its forms, and in Broken Embraces (2009), in which the main character lived right next door. In I’m So Excited you can see it from all angles, and that’s all I’m going to say… 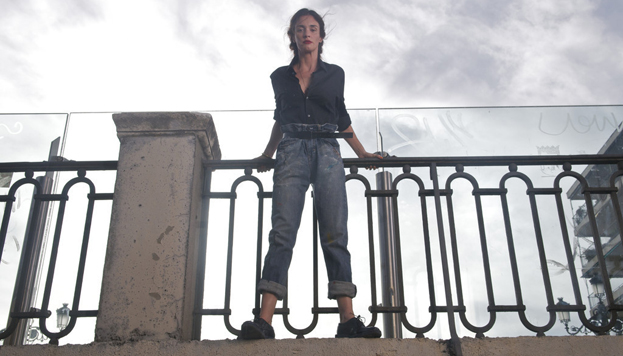 Paz Vega in I’m So Excited

But let’s got back to the beginning. It’s the late 1960s and a very young Pedro Almodóvar has just landed in Madrid, the city he had dreamed of for so long. He arrived on the road to Extremadura, but the city he saw was very different to the one he had always imagined. From the stories his mother had told him, he’d pictured in his mind a Mecca of modernity, a city of opportunities. He himself has said that he expected walking the streets of Madrid to be like strolling onto the set of Sissi, The Young Empress. However, although that was far from how he actually felt on that first day, over time he discovered that the city allowed his imagination to run wild and his name was soon known around the world.

Pepi, Luci, Bom and Other Girls on the Heap (1980) could never have lived anywhere else. Tiro, crown prince of the fictitious Tirán, travels to the Labyrinth of Passions (1982) that Madrid had become during the early 1980s. Law of Desire (1987) can only be understood in the context of the Movida movement. Becky del Páramo returns from Mexico to face her Madrid past in High Heels (1991), although she finds herself in is very different to what she remembers:

Even the slight betrayal of All about My Mother (1999) stems from the main character’s need to escape from Madrid after the tragic death of her son, who was run over by a car next to the Fine Arts Circle as he chased after his favourite actress for her autograph.

In his earlier films, the locations were not easily recognizable. There was no sign of the Gran Vía, Plaza Mayor, the Hapsburg district or the Puerta de Alcalá gate. Yet the city was always there, one could almost smell it. Madrid, described by the lead in Labyrinth of Passion as “the most exciting city in the world”, has become more sophisticated with time, at the same pace as Almodóvar’s films. 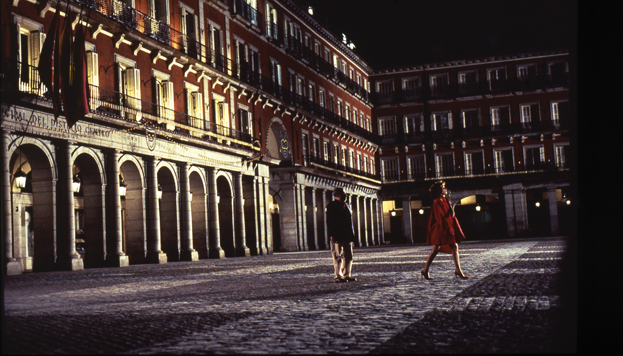 The Flower of My Secret

Here are just some of the landmarks from his movies:

La Bobia: Seductive looks and lots of flirting in this café, now known as Wooster (Duque de Alba, 3), which lies in the area of the Rastro (flea market). Legendary spot of the movida and an essential part of Labyrinth of Passion, it is the stage for the opening scene of the film and for the torrid meeting between the two leading characters, played by Imanol Arias and Cecilia Roth. Fabio McNamara, one of the key characters of that time, also makes an appearance here.

Barracks of Conde Duque (Conde Duque, 9): “Water me! Don’t be shy!” It’s one of his most renowned scenes. The character played by Carmen Maura asks a municipal worker to provide some respite from the suffocating summer heat in Law of Desire.

Montalbán, 7: Pepa (Carmen Maura) shares her attic with rabbits, hens and other animals in Women on the Verge of a Nervous Breakdown. The Gran Vía skyline with the high-rise Telefónica building can be seen in the background.

Villa-Rosa (Plaza de Santa Ana, 15): Miguel Bosé becomes Almodóvar’s most desirable muse in High Heels. Judge Domínguez by day and Femme Lethal by night, he leads a double life. After dark she brings the house down with her performances at this legendary flamenco bar, which has been part of the Madrid nightlife since the 1920s.

Plaza del Alamillo, 5: Although no one realises it, in High Heels Becky del Páramo (Marisa Paredes) returns to Madrid to die. Despite being a celebrity she decides to spend her last days in the basement where she grew up with her parents, caretakers of the estate.

Plaza de Puerta de Moros: Ankle boots which are too tight and the despair felt at not being able to remove them; an exact reflection of Leo’s mood. The writer, played by Marisa Paredes, steps out onto the street and in vain asks passersby to help her take her shoes off in The Flower of My Secret.

Plaza Mayor: A few drinks too many and a dance in one of the most emblematic spots in Madrid. Juan Echanove shares his moves with Marisa Paredes in The Flower of My Secret.

Puerta de Alcalá: “Push, push, push” Pilar Bardem shouts at Penélope Cruz to push moments before giving birth on a public bus in Live Flesh. It’s the Christmas of 1970 and Madrid is deserted. Through the window, the Santa Cruz palace, the Metrópolis building and the Puerta de Alcalá flash by.

Prado, 2: Alicia (Leonor Watling) dances while Benigno (Javier Cámara) spies on her through the window in Talk to Her. The ballet school Katerina Biloba (Geraldine Chaplin) worked at is today’s Room Mate Alicia hotel (which takes its name from the character).

Terminal 4 in Barajas Airport: In Volver, Penélope Cruz works as a cleaner in the newest part of Madrid’s airport.

Chicote: A few gin & tonics and a confession. Blanca Portillo’s character tells us her secret story in one of Broken Embraces’ main scenes. This legendary cocktail bar on Gran Vía has welcomed celebrities from all over the world. In fact, if the walls of Chicote could talk, they would tell us how Ava Gardner seduced famous bullfighter Luis Miguel Dominguín.