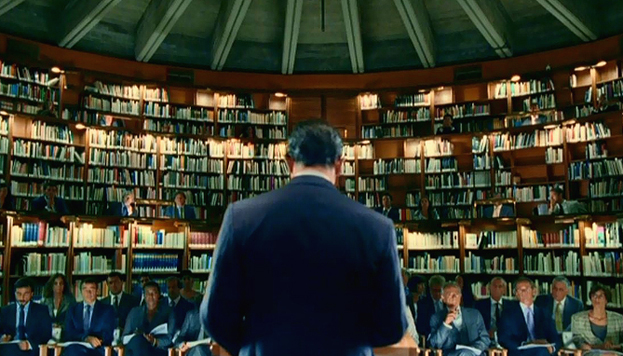 Crown of Thorns, The Skin I Live In

Pedro Almodóvar is set to release his latest film Julieta and once again the Spanish capital will be part of the characteristically eclectic backdrop. For decades, the Manchego maestro has weaved his cinematic stories through the streets of Madrid; capturing the city’s ever-changing tapestry of stark contrasts, colourful personalities and its gentle metamorphosis into a modern European capital. A movie marathon of Almodóvar’s work feels like a warts-and-all love letter to his adopted home-town, but it also one of the best ways to charter the capital’s transformation. If you’re looking to step through the silver screen and discover Madrid according to the vision of one of Spain’s most celebrated directors, here are 10 local landmarks to chart your course. 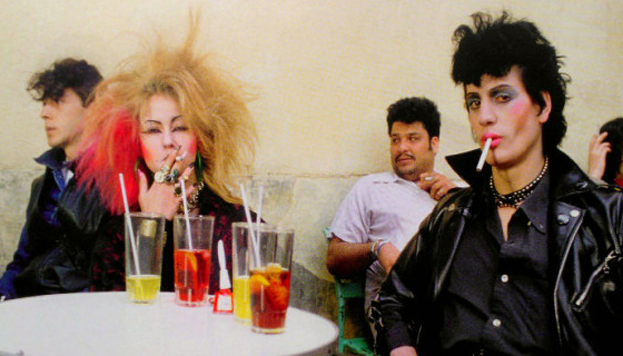 In one of his earliest features, Almódovar profiles the bar La Bobia with exquisite detail. The bar is renowned for being one of the key locations during Madrid’s La Movida counter-cultural movement and is located close to the El Rastro strip, which transforms into a different kind of labyrinth of passion every Sunday in the form of a flea market. The bar is present from the film’s opening in which the two main characters Riza Niro (Imanol Arias) and Sexi (Cecilia Roth) sit and smoke on the pavement terrace. In its hey day the bar was the perfect microcosm of Madrid’s rambunctious Movida spirit, frequented by the vanguard of the city’s writers, rockers, musicians, punks, and painters. After closing for a spell, it was recently re-opened under the same name but is a much tamer affair; serving a sumptuous selection of Asturian cuisine and with not a mohawk in sight. 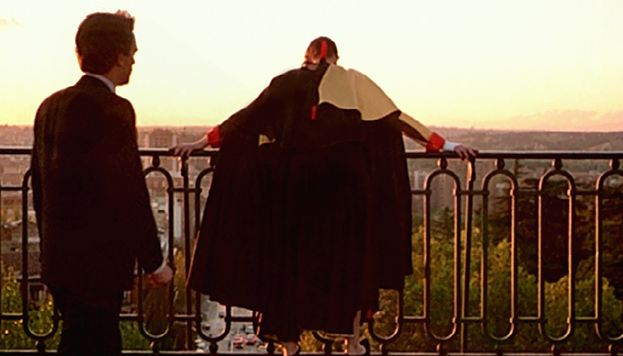 This iconic bridge has appeared in so many Almodóvar films that it has become somewhat of a staple. Many film buffs believe it has become a motif of la muerte (death) given the bridges dangerous history. It first appeared in Matador – a film that explores the fine line between passion and death. Later, in the 2009 film Broken Embraces, Lluis Homar’s character lives in an apartment on Calle Segovia just below the viaduct while in the comedy I’m So Excited (titled quite differently in Spanish as Los Amantes Pasajeros) the towering bridge is one of the film’s few exterior locations, when actors Blanca Suárez, Carmen Machi, and Paz Vega are brought together by a series of unfortunate coincidences. The bridge itself is worth a visit, not only does it serve as a vital connection between the old quarter and the Royal Palace but it provides sweeping views of the city’s south. 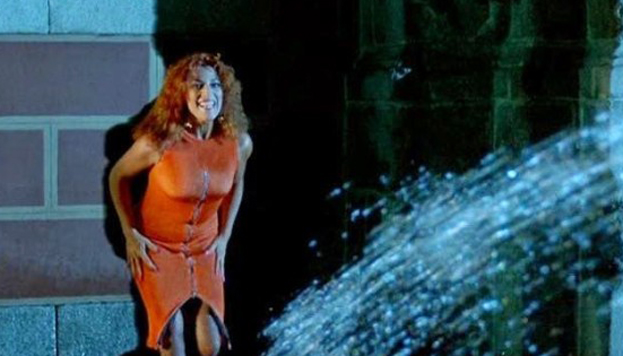 As Carmen Maura’s character in Law of Desire walks down a deserted street on one of Madrid’s characteristically steamy summer nights, she calls out a city street cleaner “Riégueme! No te cortes!” (Water me down! Don’t be shy!). As he hoses her down with a steady torrent of water, her character is ecstatic and transformed; Madrileños familiar with the nocturnal heat of their city’s pavement would surely emphathise with her joy. The scene was filmed on the Calle Conde Duque and shows the street lined with construction work and scaffolding; hinting at the neighbourhood’s future transformation. Today, Calle Conde Duque and the surrounding neighbourhod is one of Madrid’s most polished districts, home to some of the best café’s, eateries, and retail outings. The ornate façade where Maura stops to get a drenching is actually the old military barracks of the royal guard and, following a lengthy restoration, is now the Conde Duque Cultural Centre. 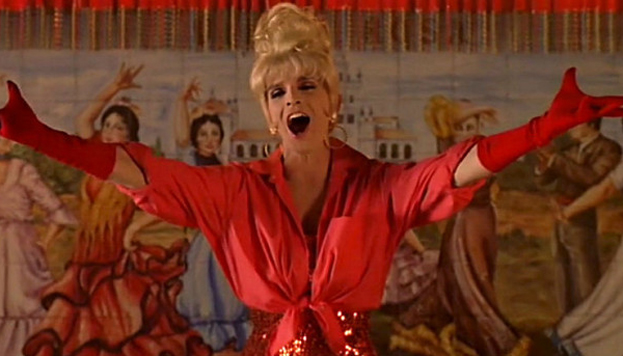 In High Heels (Tacones Lejanos) the drag queen Letal (Lethal) played by Miguel Bosé performs at this flamboyantly decorated venue which, in real life, is the famous flamenco tablao Villa Rosa. The elaborately illustrated tiles that cover the façade are suitably matched by the traditionally-styled interiors and the exuberance of the performers that bring the stage to life each day. After taking in a show, step over to a one of the many terraces in the adjoining Plaza Santa Ana for a Tinto de Verano (Spanish summer wine) and watch the inevitable daily drama play out in the square before you. 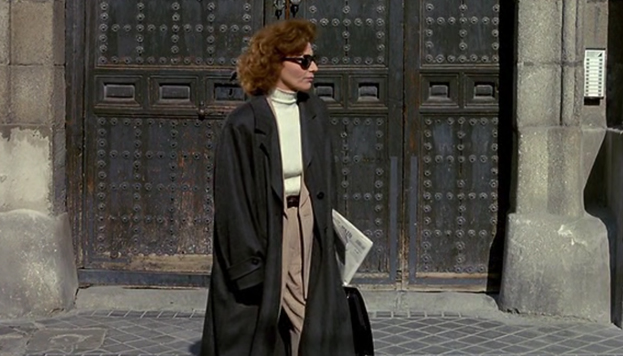 Plaza de La Paja, The Flower of My Secret

Tucked away in the colourful neighbourhood of La Latina, the Plaza de La Paja is one of the city’s most scenic squares. You won’t find sweeping vistas of the city skyline; instead this plaza is populated with terrace seating where famished locals gather to feast on tapas, raciones, and the much-loved menu del día (lunchtime set menu). Filled with trees and surrounded by historical buildings the plaza served as the suitably emblematic address of Marisa Paredes in The Flower of My Secret. The film also includes a memorable dance scene in one of Madrid’s most recognised squares – the Plaza Mayor – but unlike its depiction in the film, you’re unlikely to find this popular location empty – ever. 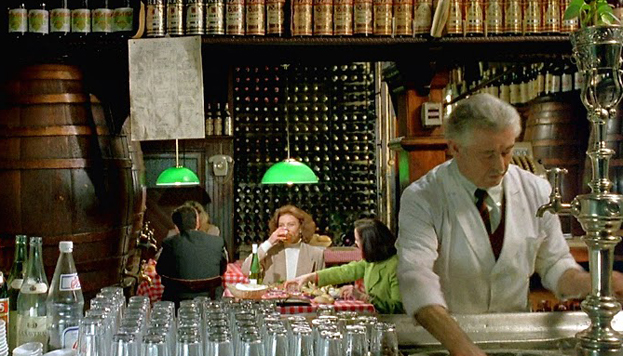 Taberna Ángel Sierra, The Flower of My Secret

One of Madrid’s oldest and beloved bars can be spotted in The Flower of My Secret when Marisa Paredes’ character Leo Macías and her friend Betty (played by Carme Elías) meet for dinner. In the twenty-one years since that film was released, the bar doesn’t seem to have changed one bit – and that’s exactly how the wise faces of its smartly-dressed waiters seem to like it. The best way to experience this taberna (and perhaps Madrid) is by ordering a caña (little beer), a vermut (vermouth) and some banderillas (skewered tapas) and watch the action in the Plaza de Chueca before you. The surrounding district has come a long way since Antonio Banderas’ character in Tie Me Up, Tie Me Down (1989) surveyed the sleaze and squalor that dirtied Chueca’s streets in the 1980s and 90s; today it is one of Madrid’s most popular neighbournhoods and is the sentimental home to the city’s LGBT community. 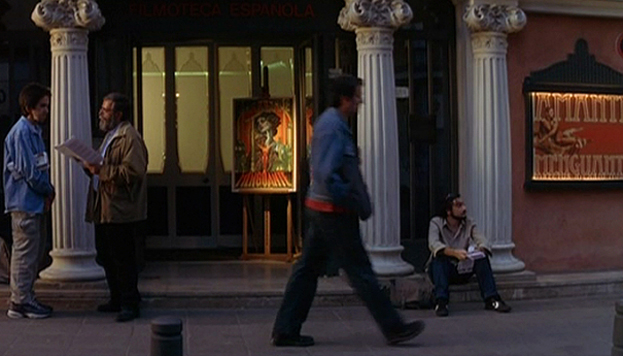 Cine Doré, Talk to Her

One of his most well-known films includes a pivotal scene in Madrid’s Cine Doré, a beautiful cinema just a short pace from the Metro Anton Martín it is also conveniently sat alongside the buzzing Anton Martín market. In the film, Benigno (Javier Cámara) heads to the cinema to watch an old silent Spanish film Amante Menguante, which later becomes a crucial element to the unfolding story. Since 1982, this (nearly) century-old cinema has been home to the Spanish Filmotheque and continues to delight audiences with a well-curated selection of Spanish and international films in original version. The beautifully restored interior of bright blue and rich red gives this film-house an extra dose of movie magic and makes it feel like a Spanish version of Cinema Paradiso. 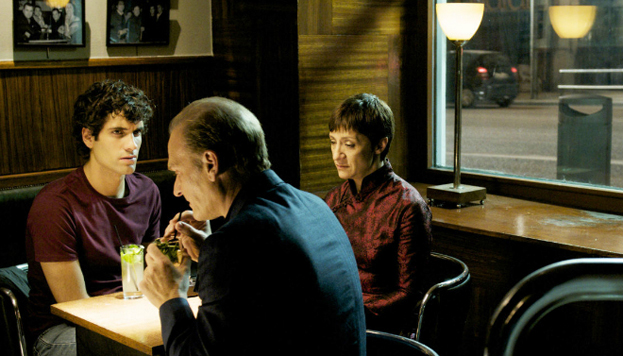 This legendary cocktail bar has long been a magnet for movie stars and matadors, from Ava Gardner to Luis Miguel Dominguín. A quick glance up at the wall reveals a collection of fading photographs that immortalise decades of esteemed revelers. Almodóvar chose the bar as the setting for one of the main scenes in Broken Embraces where Blanca Portillo’s character becomes inebriated with Gin & Tonics (one of Madrid’s most popular tipples) and finally reveals a secret crucial to the film’s plot. Directly behind Museo Chicote (although only accessible from another street; Calle Reina 16) you’ll find the equally iconic Bar Cock which is the bar where actor Tamar Navas works as a DJ in the same film. 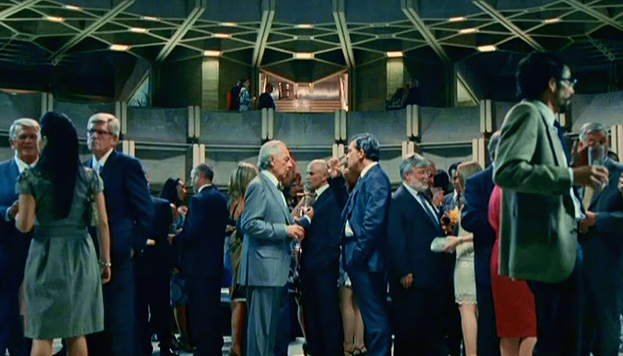 Crown of Thorns, The Skin I Live In

One of Madrid’s lesser known structures is also one of its most breathtaking. Officially it is the headquarters of the Spanish Historic and Artistic Heritage Institute but its spiked and circular form earned it the colloquial title of the Crown of Thorns. You’ll have to make the short journey to the Ciudad Universitaria district to get a look (not far from the central district of Moncloa) but the architectural wonder, designed by the celebrated duo Fernando Higueras and Antonio Miró, is worth the effort. Almodóvar used the eclectic building for a scene in the deliciously creepy The Skin I Live In, where Antonio Banderas’ character gives a conference. 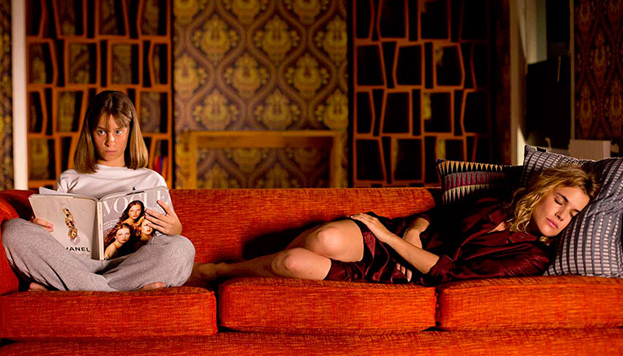 Almodóvar’s latest drama Julieta develops across the Iberian Peninsula from the Galician countryside to the Pyrenees mountains, but the director didn’t forget Madrid; choosing the characterful streets of the Las Salesas district to represent the city in the 1980s. The area, which has undergone an impressive transformation in recent years, was abuzz last August when the director and his team moved in to film a few scenes with Emma Suárez on Calle Fernando VI. While a cranky bar owner was reportedly unimpressed, many locals flocked to get a glimpse of the cinematic action and will no doubt be rushing to the box office to see their neighbourhood up on the big screen this April.