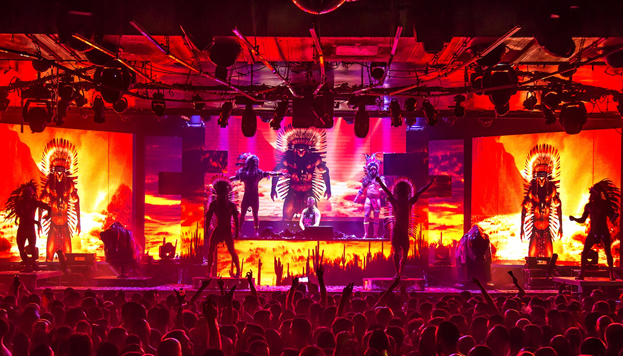 Madrid’s raucous gay pride week is the Spanish capital’s most popular event and one of the world’s biggest LGBT celebrations to boot; around 2 million people take to the streets for the annual pride parade alone. This year the festivities will take place earlier than usual – between June 29th and July 3rd.

Most of you will already have your hotels booked, flight reservations made, and party ticket confirmations sitting in your inbox. However, once you touch down, chances are you’re going to need a bit of insider guidance to know where to eat (there’s more to Madrid cuisine than the restaurant Vivares, you know); where to work out (heads up: it’s not all about the quality of the machines); and a few tips on what to do during the day (a few hours of Madrid sunshine will do you wonders after a strenuous night of partying). There’s even a Top 5 party recommendation list (that’s why you’re really here, right?) and a few left-of-centre suggestions to give you a more fulfilling Madrid experience (beyond the dance floor).

With this Madrid 5 x 5 Pride Guide in your pocket, set yourself to autopilot and enjoy 2016’s week-long celebration.

Blink and you’ll miss it, so make sure you stake out a spot on Calle Pelayo in Chueca on Thursday the 30th of June so you can watch the hilarious (and high-stakes) high-heels race. The glamorous death-match commences at 6pm.

Starting at around 6pm on the Saturday, this popular parade is where the city’s free-loving liberal spirit comes out to shine. Nearly the whole city – from families to gregarious grandmas – come out to watch the parade and the guys and girls flexing their best dance moves on the pulsating parade floats.

The marathon event takes place on the Friday in Puerta del Sol from 8pm to 2.30am. Some of the best and bravest ‘Macho Ibéricos’ battle it out (a swimsuit contest is involved) to be crowned Mr Gay Pride 2016. The completion is proceeded by live musical acts and DJ sets late into the night.

As you walk around Madrid’s vibrant streets, make sure you pay your respects to Madrid’s finest uniformed men and women. Unofficially one of the world’s best-looking police forces, they will be on hand to keep the streets safe and help point you in the right direction if you need help (and look damn good as they do it).

5. The Main Party: WE Olympic Games at Fabrik

This is probably one of the most difficult decisions of the week and this year there’s plenty of competition. This year’s We Party at the super-club Fabrik on Madrid’s outskirts is your best bet – it’s not only the biggest party, but one of the best organised, most spectacular stage productions and best looking – which means it’s always the most popular. If you’re discouraged by the distance, don’t worry, there will be dozens of buses taking revellers to and from the party (a taxi is also an inexpensive option).

5 RESTAURANTS FOR A TASTY MADRID FEAST 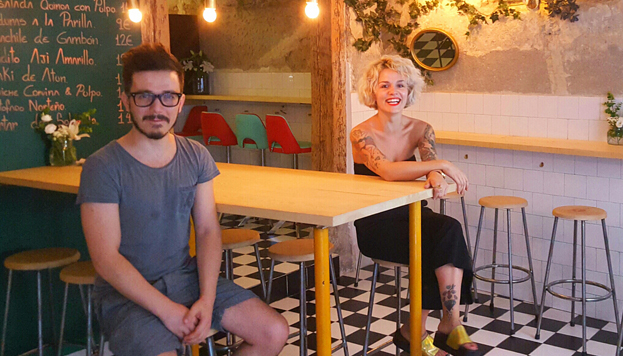 This recently revamped bar is now one of Madrid’s most authentic, unpretentious Spanish eateries. The hand-painted tiles on the walls were sourced from the ruins of a palace but the food is the real masterpiece on show here. You’ll find it tucked away on Calle Vicente Ferrer in Malasaña.

The ideal spot to taste one of Madrid’s coveted ‘Menu del día’ (a set menu of around €10), this Balearic-looking eatery in Malasaña is an authentic restaurant and bar helmed by an even more authentic Spaniard called Toni. It’s just a short walk from Gran Vía on Calle Corredera Baja de San Pablo.

With four locations around the city, this reliable restaurant has a cosmopolitan menu and the kitchen is open all day long. The top two central locations can be found in Malasaña and the Literary Quarter.

This Galician-Peruvian fusion restaurant is one of Malasana’s hottest tickets but if you get there before the Spanish dinner time (which is 9.30pm) you’ll easily get a seat. Owners Libia and Álex serve the tables themselves, adding an extra dose of charm.

5 SHAMELESSLY TOURIST THINGS TO DO 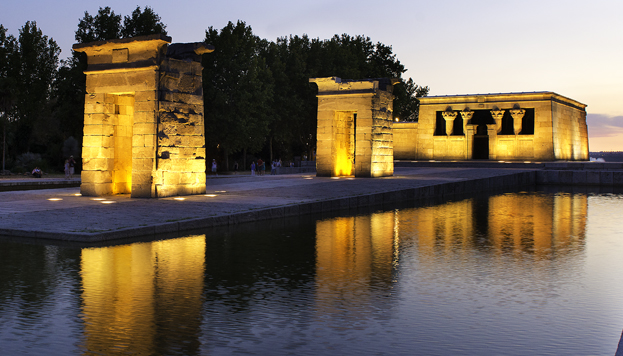 It’s not just the endless labyrinth of tabernas and bars that bring this district to life, but the colourful streets and eccentric characters pouring your drinks or selling bric-a-brac along the famous Rastro strip all swirl together for a very authentic Spanish experience.

An ancient Egyptian temple in Madrid? Yes, this is a thing. The relic of a monumental thank-you gift from the Egyptian government for the work of Spanish archaeologists along the Nile. You can find the temple and some spectacular views over Casa de Campo in the Parque del Oeste just behind Plaza de España.

Madrid has one of the biggest Royal Palace of any European city. Take a tour – or at least get a photo in the beautiful gardens that surround it.

There are so many of these perfectly preserved time capsules dotted around the city and many of them have been perfecting the art of good tapas and tipples for over two centuries. My favourites are: Bodega La Ardosa (Calle Colón 13), Casa Camacho (Calle de San Andrés 4), Stop Madrid (Calle Hortaleza 11), and Casa Dani (Calle Calatrava 11; you can read more about the last one here.

I mean this in both senses of the word. The district is not only one of the world’s biggest LGBT-friendly suburbs it’s also steeped in history, colourful architecture, good food and is a popular destination for an afternoon stroll to check out the local (and international) talent. 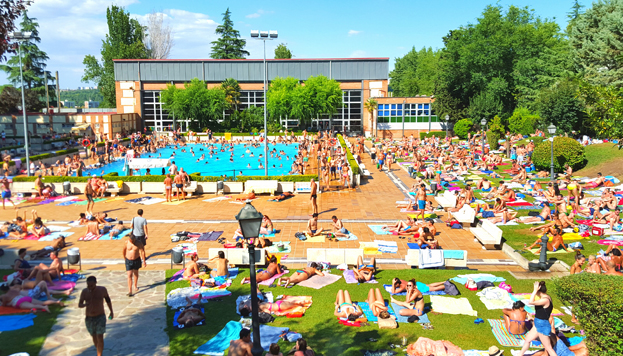 Located in the city centre, staffed by Valencian body builders, and crowned by a sun-drenched rooftop terrace restaurant and small pool, Gymage is even offering a special visitors rate for Gay Pride.

This up-market chain has two inner-city locations each with their own spa facilities. If you like to train in peace, this the place to go.

Sitting in front of Madrid’s eerie statue to the fallen angel (also known as Satan), the Buen Retiro Park’s outdoor gym is a popular spot for the local street workout clan and gives you a healthy excuse to visit the beautiful park.

Sure, you might not end up racking up many laps in the pool, but no-one is going to give you a hard time for having good intentions. Everyone tries to pay a visit to Madrid’s most gay-friendly pool (located a short walk from the Lago metro station) during Pride; mainly to socialise and preview the season’s best bods.

Less central, but not too far away, Urban Fitness is a good-sized subterranean gym a few steps from the San Bernardo Metro on Calle Alberto Aguilera 1. 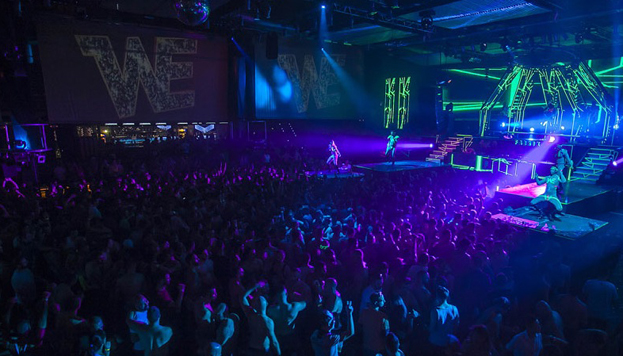 This year the celebrations will spill onto the streets like never before. Much of the action will be concentrated in the traditional hotspots of Plaza del Rey and Plaza Callao but there’s plenty more. One of the best public places to mingle is the newly re-named Plaza Pedro Zerolo (formerly Plaza Vazquéz de Mella), to honour the Socialist politician who fervently campaigned for same-sex marriage (which was legalised in Spain 11 years ago). Check the local programme and dance to a colourful programme of musical acts and DJs under the stars.

No-one is really here to swim (mainly because the pool is more of a water feature), but this pool party, organised by the WE Party Group gives everyone an excuse to revel under the sun. This provides two obvious benefits: 1) to turbo boost your tan and 2) to get an advance look at everyone with their shirts off. Be mindful of the power of the Madrid heat and don’t forget to wear (sun) protection.

A lot of people prefer to save the Friday for a more low-key night on the town. Some of the preferred haunts are Liquid, Why Not?, and Strong (depending on what tickles your fancy); all of which have plenty of smaller scale parties planned. However, sometimes the best bet is to just follow the social current and see where the night takes you. Who knows, you might even end up at the WE Party at 4am…

Saturday night always comes with a conundrum: where to celebrate the main event. Take my advice: the We Olympic Games party at the mega-club Fabrik is the place to be. With the best headlining DJs, dancers (selected for their likeness to Olympic gods), and a space that includes two massive rooms and an outdoor garden to breathe in the night air, this is Pride’s hottest ticket. Buses will transport revellers to and from the venue (which is often a hilarious experience in itself), while sharing a cab will only cost between 30-40 euros (or 10 euros each). If you miss the main event, you’ll never hear the end of it from those who were there…

After 5 days of festivities this is not only the last hurrah but also the place where everyone well and truly lets their hair down. Produced by the We Party Group and starting in the early evening, the dance floor is dripping with action for over 10 hours until 6am. If you still feel you haven’t got your pride’s-worth, then this is your last chance to live it up.